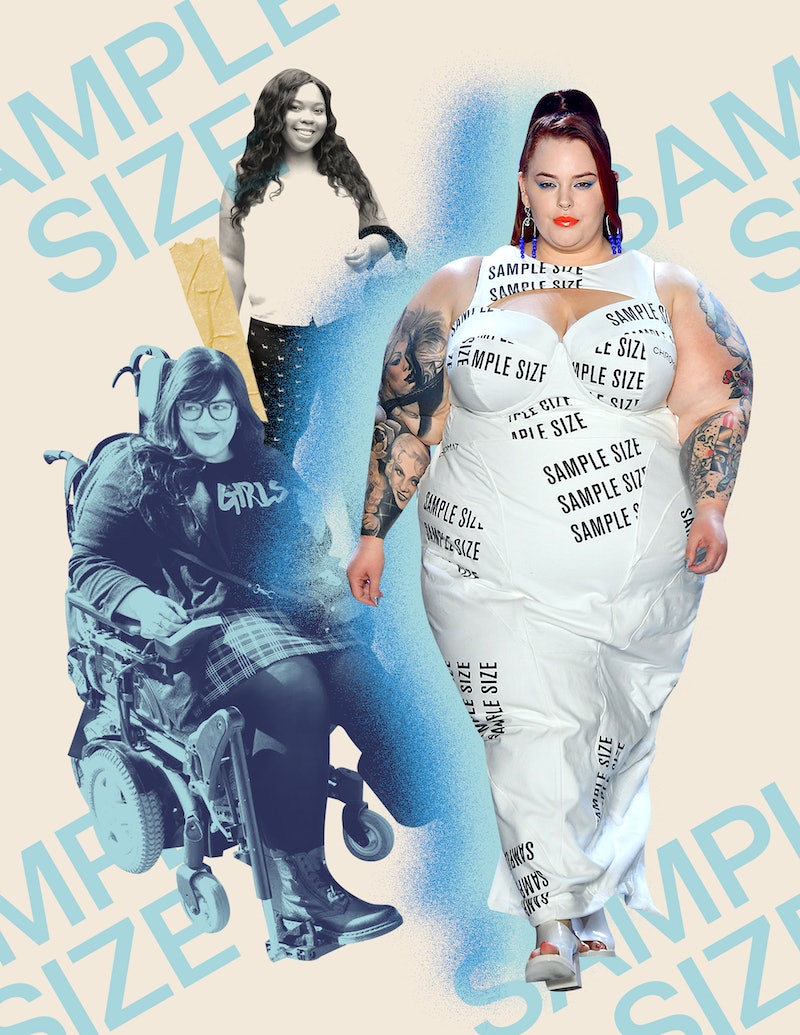 Gianluca Russo is the founder of The Power of Plus, a safe space for engaging, forward-thinking conversations around fashion and body positivity. In this op-ed for Bustle, he explains why brands need to embrace plus size models of all body types.

Of the top 10 highest paid curvy models of 2020 — a group that includes Ashley Graham, Precious Lee, and Candice Huffine — 9 have the same body type: hourglass, flat stomach, no double chin. Tess Holliday, who proudly displays her round waist on the runway and in photo shoots, is the only non-hourglass model to make the list. It raises the question: why do so many successful plus size models look the same?

“The fashion industry seems to believe that plus-size means curves in all the right places, hourglass figures, small bellies, thick thighs and bottoms — there is not much more diversity than that,” says fashion and lifestyle writer Sarah Alexander-Georgeson, age 34. “These types of bodies are beautiful, as are all bodies, but they’re not solely representative of what plus size is.”

For too long, plus size has been viewed as a monolith, rather than a spectrum. The market has been represented by a select group of women with a specific body type. And while beautiful and stunning in their own right, the chosen few hardly represent the full scope of the plus size community.

The centering of one body type creates a new, unattainable ideal. Sure, women may now feel less pressure to look like Heidi Klum, but curvy women without flat stomachs and an hourglass figure are feeling pressure to look different.

“People have been forced to believe one body type is ideal, causing body dysmorphia, self-loathing, yo-yo dieting and beyond,” says Marcy Guevara-Prete, age 36, co-owner of The Plus Bus. “Consuming mainstream media has caused irrevocable damage to people's self image and it takes years of reprogramming to embrace the jiggle and truly be body neutral, let alone body positive.”

These types of bodies are beautiful, as are all bodies, but they’re not solely representative of what plus size is.

All of this has become abundantly clear in recent years. Though in 2015, the aforementioned model Tess Holliday became the largest model to ever be signed to a major agency, not much has changed since.

In 2017, Ashley Graham became the first plus-size model to walk in the Michael Kors show at New York Fashion Week. In 2019, Victoria’s Secret featured its first plus-size model, Ali Tate-Cutler, who wears a size 14. In 2020, Versace sent three plus-size models down the runway: Precious Lee, Jill Kortleve, and Alva Claire. While these all represent wins for the plus size community at large, the models are overwhelmingly hourglass-shaped and smaller than the average American woman, who wears a size 16/18.

Over the past year, as my co-founder Shammara Lawrence and I’ve grown The Power of Plus, a size-inclusive digital community centered in true, authentic representation, I’ve witnessed the damage spread. I’ve seen firsthand the many women, men, and non-binary people who are craving, more than anything, to finally feel embraced and represented.

As we relaunch our platform this month in celebration of our one-year anniversary, we are unveiling our #PowerfullyMe campaign, aimed to honor that which makes us feel most powerful and authentic. Because everyone in this community — whether apple, pear, or hourglass shaped — should feel empowered to embrace their true selves, without having to chase yet another curvy body ideal.

“The plus-size fashion industry has fallen prey to the same antics of the regular fashion industry, and while it has been praised for ‘breaking the mold,’ what it really has done is just ‘bolden the mold’ or rather, grow the mold,” says Guevara-Prete. “The mainstream plus-size industry isn't breaking any barriers, they are simply creating ‘flattering’ looks for women over a certain size and selling those looks on Amazonian goddesses blessed somehow with thick thighs and chiseled jawlines.”

The trouble doesn’t stop there, however: The situation becomes far worse when intersectionality is introduced. Curvy may be acceptable to brands on its own, but fat and disabled? Fat and Black, especially dark-skinned? Fat and queer? Each marginalization feels like another point taken away.

"As a fat disabled person, I am used to not seeing myself in the media and it is getting more and more upsetting,” says Alexander-Georgeson. “And despite disabled people gaining more representation, within the community, only pretty, thin disabled people are deemed acceptable. It is almost as if it is far too much to ask for the intersections of a fat, bisexual, disabled person to be part of a media campaign.”

Markers of weight gain like rolls, cellulite, or stretch marks are also rarely visible in plus size fashion advertising or on the runway. “Thicker thighs and a fuller face may be permitted sparingly, but rolls? Stretch marks?,” says Bella Gerard, age 26, fashion and lifestyle editor at Stylecaster. “Brands are still turned off by the reality of beautiful bigger bodies, and in embracing only very shapely hourglass figures that barely qualify as plus to begin with, they continue to perpetuate the idea that fat bodies are not acceptable, all while thinking they’re aiding the body positivity movement by ‘being inclusive.’”

After a year of limited runway shows, Gerard experienced this conundrum once again at Miami Swim Week in early July, where few brands bothered to cast an inclusive set of models.

“The energy was palpable when a curvier model took to the runway to show off her suit,” says Gerard. “We loved to see it, and many people with similar figures want to buy it, too — so what are these brands afraid of, other than losing an untouchable aesthetic that isn’t even serving them?”

In embracing only shapely hourglass figures, brands perpetuate the idea that fat bodies are not acceptable.

There are, of course, many reasons designers stray from representing the spectrum of plus, especially on runways. Sample sizes, for instance, make it difficult to allow for the various ways different curvy women may hold their weight. It’s easier and less time-consuming to design for the bodies they already know well, ensuring fit will not be an issue in the few days between casting and showtime.

Then there’s the money, the extra resources required, the education about designing for larger bodies, and much more. To say it would be easy to represent all body types would be an overly-simplified, false statement. But when it is possible — like in beauty campaigns or with designers that do sell extended size ranges — why do brands still fall short?

As the fashion industry evolves, we cannot let the momentum of the plus-size movement die down. It is through these conversations that we can create long-lasting change.

“It shouldn’t just be plus-size people shouting about this; we need allies,” Alexander-Georgeson says. “Diversity of bodies should be a standard because we all have something to offer.”