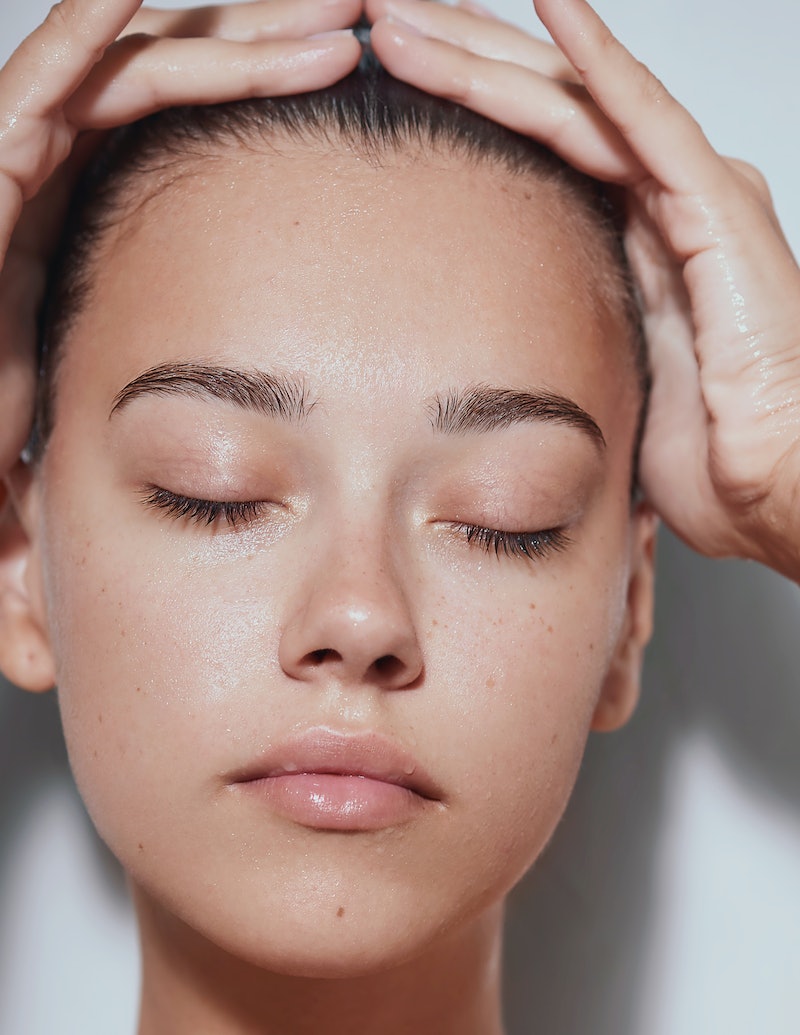 As a beauty and wellness writer, I feel it’s my duty to try every cutting-edge product and treatment around — even those I don’t quite understand (yet). Some are high-tech upgrades or innovations in popular beauty tools, like microcurrent facial devices and UV light-based blow dryers, while others sound like they're straight out of a science fiction movie. One example of the latter? Hyperbaric oxygen therapy, an especially unique treatment I had the pleasure of trying at Joanna Vargas Skin Spa in New York last month.

A brand-new addition to the celebrity facialist’s salon menu, hyperbaric oxygen therapy (HBOT) entails includes being zipped into a pressurized oxygen chamber — as if into a garment bag — where you’ll hang for 60 minutes. The idea? As you lie there and nap, read, or scroll through Instagram, your body is soaking up the benefits of hyperbaric oxygen therapy, which all come from the pure oxygen you’re breathing.

Now comes the part where I admit that I was dreading getting into one of these oxygen chambers. I’m prone to PTSD-induced panic attacks, and small spaces are one of my primary triggers. I was positive I’d panic while inside of the chamber and claw at the walls begging to be let out. But I was intrigued enough to go through with it; Justin Bieber actually discussed how HBOT helped him with sobriety in his docuseries Seasons. Plus, Joanna Vargas wouldn’t offer it without a good reason. So I faced my fears and climbed into the chamber — and, as it turns out, I loved it.

Read on for intel on hyperbaric oxygen therapy benefits and what it’s like to experience the treatment.

What Is Hyperbaric Oxygen Therapy?

Hyperbaric oxygen therapy has served as a medical treatment for over a century. In the early 1900s, the U.S. Navy used HBOT to treat soldiers with diving-induced decompression sickness. The 1950s then saw an increase in clinic research on HBOT, which found it worked to treat infections such as carbon monoxide poisoning (for which it’s still used today). Since then, HBOT has been utilized in the treatment of a wide range of afflictions, including chronic wounds and illness, diabetic ulcers, nerve trauma, and even PTSD.

Essentially, being exposed to pure, pressured oxygen has a domino effect of health benefits. These include delivering oxygen to lacerations and reducing inflammation as well as increasing the production of white blood cells, explains Dr. Casey Kelley, M.D., ABoIM, founder and medical director of CASE Integrative Health, who notes that it works by aiding the production of new, oxygenated plasma to the affected area(s). “When we have a deep laceration, the swelling that results starves the afflicted area of oxygen and the tissues die off, leaving the body unable to heal,” Kelley says. “HBOT will work to reduce inflammation while delivering a high dose of oxygen right to the impacted tissues. It also triggers the body to produce collagen, which is crucial for illness or wound healing.”

HBOT rapidly increases the amount of oxygen in the blood supply, which then triggers the body’s immune response, according to Kelley. “Hyperbaric oxygen therapy acts as a helper to our white blood cells while also stimulating our natural killer cells when they are looking to find and eradicate invaders,” she says.

With such a long medical history, you might be wondering why HBOT is offered as a salon service. I was, too, so I asked Vargas, celebrity facialist, founder of Joanna Vargas Salons and Skin Care, and author of Glow From Within what inspired her to include it as a treatment.

“Oxygen has always been one of my go-to steps in the facials I provide, so it makes sense that we have something that is addressing the whole body,” Vargas tells me, pointing to its ability to reduce inflammation while increasing circulation and collagen production (quite like it would for a wound). “Using this therapy in combination with other technologies has really taken the [clients’] results to the next level.” She also nods to the rise of whole-body care — as in skin care beyond the face — as a reason she’s into HBOT; since oxygen therapy benefits the skin, Vargas wants to ensure the entire body gets TLC too.

The most common type of HBOT is done in a monoplace chamber, which resembles a large, pressurized cylinder. “The patient enters and lies down, and the chamber then slowly fills up with 100% oxygen, as opposed to the 20% oxygen we breathe in when we take a breath outside the chamber,” Kelley says of the treatment process.

At the Joanna Vargas Skin Spa, my esthetician literally zipped me into the cylinder, where I laid down. See below for pictures of said cylinders before being inflated — I like to describe them as big, cute sleeping bags.

As I admitted above, I was very skeptical (and TBH scared) to try this treatment. But my esthetician explained the process to me in detail, noting that I might feel my ears pop while the chamber inflated and deflated. She then offered an iPad to use while inside, though I opted to keep my iPhone and text instead, and also provided a walkie-talkie to use in case I needed to communicate with the outside world. I assumed I would use it in less than five minutes and demand to be let out.

View from inside the HBOT chamber.
I was provided with a walkie-talkie to communicate with my esthetician.
1 / 2

The chamber then began filling up with oxygen — it takes about 15 minutes to inflate and then deflate on either end of the treatment — and once it was fully pressurized, I felt immediately at ease. I didn’t even want any form of distraction or entertainment while inside: I was so happy, relaxed, and even felt euphoric, experiencing a sense of calm I hadn’t in what felt like years. Content, I closed my eyes and took a nap, and before I knew it my esthetician was deflating the chamber again.

It’s hard to say if I experienced many physical benefits from HBOT, as it requires consistency for best results (Kelley suggests using HBOT daily for 40 days if treating a chronic condition, for example). However, I did notice a change in my skin: Before getting into the chamber, my skin was drier than usual, but post-HBOT it reverted back to its more hydrated (albeit fairly oily) state. Mentally and emotionally, though, I felt a massive difference. I was tranquil and comfortable while in the chamber, and the feeling lasted for the rest of the day. I even got caught in a thunderstorm while walking home and didn’t worry about my hair.

TL;DR? The only part of the oxygen therapy treatment I didn’t love was when it ended. And when it did, I immediately walked to the front desk to make another appointment. If you’re ever looking for a beauty treatment that has benefits beyond the skin, I’d highly recommend trying this one.

Hachmo, Y. (2021). The effect of hyperbaric oxygen therapy on the pathophysiology of skin aging: a prospective clinical trial. Aging. https://www.ncbi.nlm.nih.gov/pmc/articles/PMC8660605/

Hyperbaric Oxygen Therapy for Adults with Mental Illness: A Review of the Clinical Effectiveness. (2014). Canadian Agency for Drugs and Technologies in Health.

More like this
TikTokers With Eczema Are Opening Up About Topical Steroid Withdrawal
By Kui Mwai
12 July 4th Beauty Sales To Jump On ASAP
By Jordan Murray
The Best Of June's Beauty Launches, According To Our Editors
By Bustle Editors
The $6 Drugstore Beauty Product Taraji P. Henson Uses Every Single Day
By Danielle Sinay
Get Even More From Bustle — Sign Up For The Newsletter