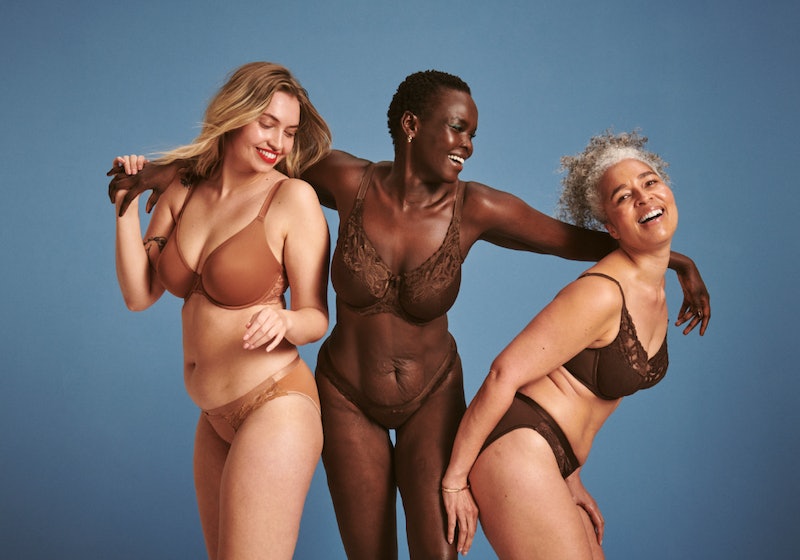 Marks & Spencer’s ‘Nothing Neutral About It’ lingerie campaign is largely inoffensive. It features women of all shapes, sizes, and races dancing jubilantly in their underwear as they wave goodbye to ubiquitous “beige” in favour of nude shades for all skin tones. However, the messaging behind it saw the brand come under fire last week when it referenced the Black Lives Matter movement and, even more shockingly, the death of George Floyd as part of its PR pitch.

Despite M&S’ intentions, the backlash was easy to predict, with consumers becoming concerned that the retailer was exploiting the BLM movement to sell knickers. While announcements about any new, shade-inclusive collection will almost always talk about race, do they have to talk about Black trauma?

Firstly, it’s worth noting what M&S actually said when the new campaign was unveiled. In a statement sent to Bustle, a quote from Laura Charles the director of M&S’ lingerie department read:

“We are the UK market leaders in bras and knickers and with that comes a responsibility to ensure what we sell makes all of our customers feel fantastic. We listened when our customers and colleagues told us we hadn’t got it right when it came to colour; both in the choices available and the way we talked about the neutral shades. The global conversations around race and equality over the last 12 months spurred us to go faster in creating a better, more inclusive range.”

In a marketing video released on the same day (June 21), Charles specifically cited the “horrific death of George Floyd” and the conversations it started as something that spurred her team to “go harder and faster.”

Within hours, the Daily Mail posted the headline ‘This Is Not Just Any Lingerie... This Is M&S Underwear Inspired By George Floyd’. Twitter reacted, and, like clockwork, the distasteful “George Floyd Knickers” topic was trending. Quickly, M&S’ shiny, all-smiling, all-inclusive diversity campaign became overshadowed by heated commentary. Meanwhile, I was yet to know if the knickers were made of a cotton or polyester blend.

For Black consumers living an a post-2020 world, it’s never just about knickers. One year on from the BLM protests, it’s a balance between embracing the inclusivity we’ve long demanded and reckoning with the harsh reality of what it took to finally achieve it: police brutality, a murder caught on video, global unrest, blackout squares, social media hashtags, statues toppling, and TV debates. For me and many, many others, it’s been traumatic and exhausting.

Among the hundreds of tweets that came in reaction to the M&S’ new campaign, one person wrote, “Because nothing says ‘sexy underwear’ like a dude choking on his own spit in the street with a knee on his neck while having a heart attack.”

The clear reality is, yes, it did. After George Floyd’s death, many brands turned to “brand activism” and used their platforms to promote both diversity and anti-racism – some more successfully than others. There’s a clear difference when you compare Nike’s ‘Don’t Do It’ anti-racism ad featuring Colin Kaepernick and the messages shared by Ben & Jerry’s, a company with a long history of advocacy and activism, to Pepsi’s infamous 2017 protests advert that placed Kendall Jenner as the ultimate white saviour IT girl.

It’s always a question of sincerity. A 2018 survey covering 35 countries showed that “64% of consumers would reward firms which they see as engaged in some kind of activism” and, last year, it appeared many brands were guilty of piggybacking onto the BLM cause for that reason. As diversity consultant Pepper Miller told the BBC last year, “Companies need to draw long-term plans for social inclusion and racial equality that go beyond them saying that they ‘stand with black people.’ Experience, however, tells me that's not the case. Most initiatives are one-offs.”

Inclusivity in fashion is always worth celebrating — but it doesn't have to be linked to pain to be seen as legitimate.

What does this mean for Black consumers like me? As a Black woman, I’m always hyper-sensitive to race and am tapped into most conversations that concern me and people who look like me. As a result, racism and the trauma that it leaves in its wake is by no means “new” – and I don’t need it to be used as a tool to sell me items I’d most likely already buy. Frankly, M&S’ real crime was not introducing this line years ago.

Inclusivity in fashion is always worth celebrating — but it doesn't have to be linked to pain to be seen as legitimate. Even typing this, it feels truly uncomfortable to think that George Floyd’s murder is being spoken about in relation to buying bras. As CNN reporter John Blake wrote at the beginning of 2021, “Here's my wish for a new year: more trauma-free Blackness.” I agree.

Maybe I’m wrong to ask brands to stay in their lane, and I’m certainly not saying the fashion industry should ignore its role in alienating minority customers, but I look forward to a day when I get to walk into a store, easily find a shade that matches mine, and, yes, prance about in my knickers, without having to contextualise my own suffering first.