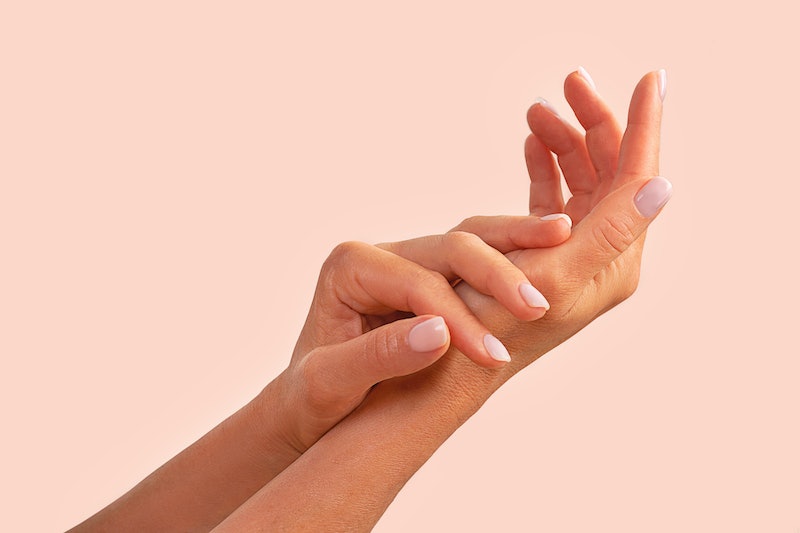 There’s nothing quite like the satisfaction you get from a fresh manicure. Smooth nail polish in your favorite shade, maybe some funky nail art — it’s the stuff of beauty lover dreams. But no manicure is complete without cuticle care. To achieve a tidy look, many people (technicians in nail salons included) snip away all of that excess skin around the nail beds. “It definitely can be tempting to completely cut everything off,” says Los Angeles-based manicurist and nail artist Chelsea King. But is this a temptation you should give into or fight against? You may have heard the beauty myth that it’s bad to cut your cuticles — so is it really? Bustle called on experts for the truth, once and for all.

Is It Bad To Cut Your Cuticles?

Note that cuticles aren’t just extra, throwaway skin. That tissue framing your nail serves some important functions. “The cuticle is the nail’s natural protective seal,” explains Dr. Dana Stern, M.D., a dermatologist and nail specialist. “It’s like the grout in your shower between your tiles.” It’s there to keep out moisture and potentially problem-causing organisms. “When that seal is removed, or becomes dry and dehydrated, it becomes compromised, and then water and moisture is able to enter the nail unit causing all sorts of problems,” Stern says. One such problem is paronychia — an infection of the skin behind the cuticle resulting in redness and swelling. If the problems persist, Stern says the nail can start to show signs of irregularity: discoloration, thickening, white patches, or bumps.

By now, you probably know where this is going. Both Stern and King say it’s never a good idea to remove the cuticle. King notes that a licensed professional should be able to tell the difference between the living tissue at the base of the nail, the eponychium (cuticle), and dead skin elsewhere around the nail that can be safely removed. Still, it can be difficult to spot without experience — and so, as a cautious rule of thumb, King recommends not cutting anything around that area. TL;DR? You really shouldn’t cut your cuticles.

How To Safely Care For Your Cuticles

Rather than snip them away, King and Stern advise gently pushing your cuticles back. For the job, Stern likes to use a washcloth in the shower, while King favors using a cuticle pusher right after you hop out. “The warm water helps to soften the cuticle,” King explains.

Note that a cuticle nipper should only be used on troublesome hangnails that keep getting snagged on things. And, BTW, dried-out, compromised cuticles make those hangnails that invite picking and biting more likely. To that point, Stern says cuticle oil shouldn’t be reserved for that manicure-day Insta pic, because keeping your cuticles hydrated is key to their overall health and appearance. To do so, apply your favorite cuticle oil, cream, or ointment at least once daily, “just like you apply moisturizer to your face every day,” Stern says. After all, she says, “There is nothing less chic than a dry, ragged cuticle.” Agreed.

Onsen Cuticle Cream, 1 Oz.
Amazon
Cuticle Pusher & Remover
ORLY
Cuccio Naturale Milk and Honey Cuticle Revitalizing Oil
Amazon
More like this
Your Guide To Treating Hyperpigmentation, Straight From The Pros
By Shani Hillian
Here's How Lip Oil Compares To Balms & Glosses
By Paris Giles
Can You Really Use Ice To Treat Acne?
By Paris Giles
Dermatologists Answer Your Most Burning Botox Questions
By Brittany Leitner
Get Even More From Bustle — Sign Up For The Newsletter

This article was originally published on Sep. 1, 2015