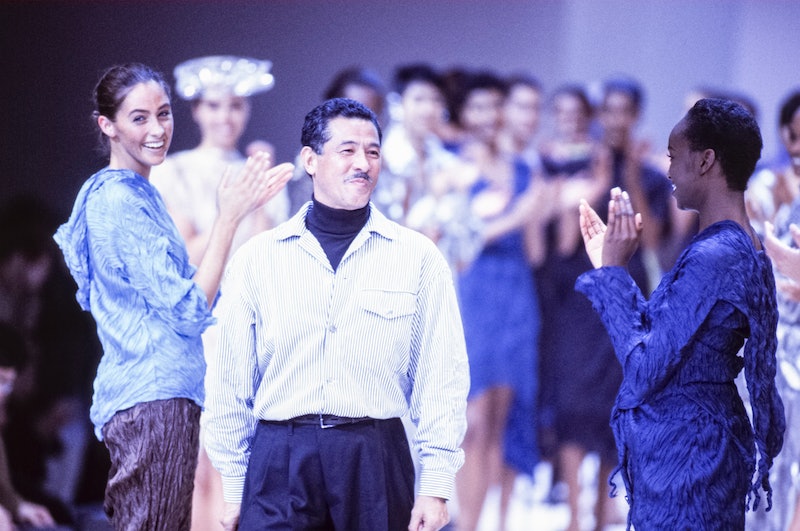 The renowned Japanese fashion designer Issey Miyake passed away on August 5. The 84-year-old was famed for revolutionising pleated fabrics and sustainable production practices. Miyake died of liver cancer, per Kyodo News Agency, with the designer’s office confirming that a private funeral has taken place already.

In a statement released by Miyake’s fashion house, they remembered his love of “the process of making things” and that “his spirit and joy, empowerment and beauty will be carried on by the next generations.”

Tributes from individuals in the fashion sphere have been flooding in, including that of Fedrico Salto, Vogue Italia’s fashion news editor. He described Miyake’s art as being “truly at the service of clothing” and that his “effort was dedicated to bringing technology and design together” made him “one of the few who knew how to combine creativity with [a] pure sense of reality.”

Meanwhile, ‘90s supermodel Linda Evangelista, who was once the face of Issey Miyake’s brand, took to Instagram to pay her respects. Quoting the famed designer, she wrote: “Design needs to express hope,” followed by a dove emoji.

Among his many accolades, Miyake was also known for designing Apple founder Steve Jobs' much talked about black turtlenecks.

Born in Hiroshima in 1938, the fashion creative was seven years old when the United States dropped an atomic bomb on his home city during World War II. The designer was “reluctant” to speak about his survival for some time, but wrote an op-ed for The New York Times in 2009, sharing his vivid memories from that fateful time.

“I never tried to be defined by my past,” he wrote. “I did not want to be labeled as ‘the designer who survived the atomic bomb,’ and therefore, I have always avoided questions about Hiroshima.” Instead, Miyake preferred “to think of things that can be created, not destroyed, and that bring beauty and joy.”