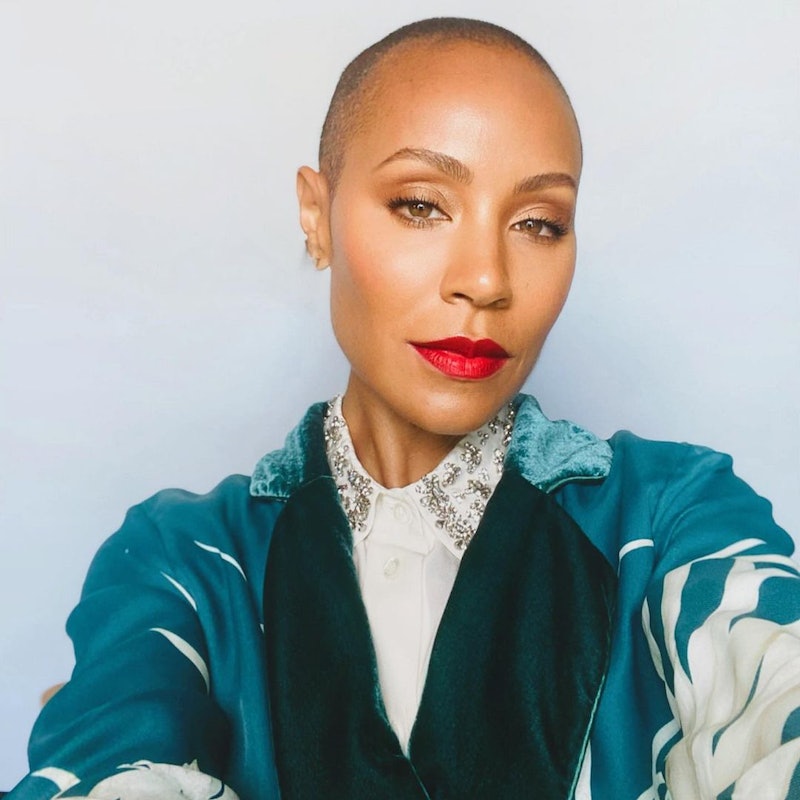 If you weren’t already aware of Jada Pinkett Smith’s alopecia struggle, chances are you are now. At the 94th Acadamy Awards ceremony on March 27, the star’s husband Will Smith (famously) slapped presenter Chris Rock after the comedian made a quip about Jada looking like “G.I. Jane.”

After Pinkett Smith tried covering her alopecia-induced hair loss by wearing a turban, the Red Table Talk host decided to shave it off in 2018 and has been rocking her close shave — and shedding light on the condition — ever since. In fact, in December, she noticed a new hairless line on her scalp, but didn’t let that deter her from having a positive perspective. “I’m just gonna put some rhinestones in there and make me a little crown,” she said in an Instagram video that day.

Alopecia is an autoimmune disease that commonly leads to hair loss, and it’s something that affects over 6.8 million people in the U.S., according to the National Alopecia Areata Foundation. It occurs when the immune system mistakenly attacks hair follicles, and there’s no actual cure for the condition. While it can happen to hair all over the body, it most commonly affects the face and head, according to the National Institute of Health.

Of course, being a woman facing hair loss can take a real toll on one’s mental health — which is why Pinkett Smith’s public conversation and positive mindset are so impactful.

Back in May 2018, the actor opened up about her struggles on her Facebook talk show, Red Table Talk. It featured Pinkett Smith, her mother Adrienne Canfield Norris, and daughter Willow Smith, and the three unravel and discuss personal topics each week, which is why her hair came up. Her mother asked her what was one part of her body that she disliked the most, and she decided to take the moment to address why she had been sporting a turban recently, and what it felt like to come to terms with her hair loss.

"It was terrifying when it first started. I was in the shower one day, and then just handfuls of hair in my hands," she shared. "It was one of those times in my life where I was literally shaking with fear. That's why I cut my hair and continued to cut it."

Pinkett Smith went for an edgy asymmetrical bob during the beginning of January, shearing back her lob just in time for the new year. Taking a bathroom selfie and posting it up on Instagram, it was a "new year, new me" moment where she captioned the photo, "Then came 2018."

Style pundits loved the bold new reveal, where they thought it was both edgy and a retro throwback to her 1989 asymmetrical hairstyle.

But while everyone assumed she booked the appointment because she just wanted to change up her look, there was a specific reason behind the hair change: To help make her hair loss more manageable. And even though she's been taking this new life change in stride, the transition has had its difficult moments.

“My hair has been a big part of me. Taking care of my hair has been a beautiful ritual and having the choice to have hair or not. And then one day to be like, ‘Oh my god, I might not have that choice anymore,'" she shared.

Even though Pinkett Smith has had tests done, doctors haven't been able to pin down if it's actually alopecia or a different factor, but she suspects that it might be stress. But perspective has helped her accept her hair loss — she shared on the show that if thinning hair was her worst medical hiccup, then she could live with that.

Pinkett Smith also loves the way she looks with her hair wrapped, so that style change has been an easy one to transition into. “When my hair is wrapped I feel like a queen. I love having a wrapped head," she explained.

Many people see their hair as part of their identity, so losing it can be really difficult. But to see Pinkett Smith accept and embrace her hair situation in such a straightforward and accepting way is really inspirational. It makes you want to accept your own body and its changes, too. As always, Pinkett Smith is a woman to look up to.

This article was originally published on May 22, 2018