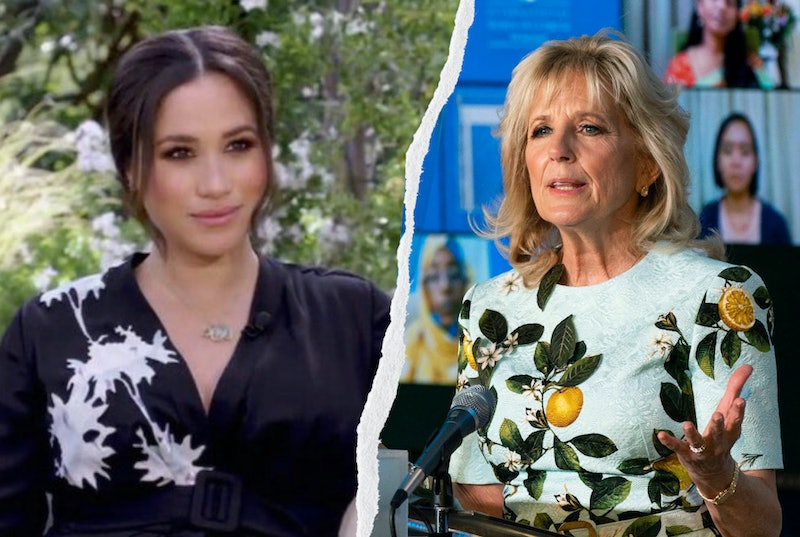 On International Women’s Day, First Lady Jill Biden partnered with the State Department in honoring 21 women from around the world and bestowing them with the International Women of Courage Award. For the event, she chose a light blue, short sleeve, A-line dress from Oscar de la Renta. It was bright, Springtime appropriate, and very similar to the drop-waist shift dress in the same print that the Duchess of Sussex wore to a Spotify event just a few weeks ago. That’s right, Jill Biden and Meghan Markle’s Oscar de la Renta lemon print dresses were the ultimate twinning moment.

The internet is now teeming with speculation that Biden chose that dress as a subtle nod to Markle, the day after her Oprah interview aired to the world. One user wrote “I don’t believe in coincidences,” while another shared “I’m choosing to believe FLOTUS Jill Biden wore this Oscar de la Renta in solidarity with Meghan Markle.” Yet another tweeted, “nice to see our FLOTUS give a nod to Meghan Markle.”

Meghan Markle wore the dress at Spotify’s Stream On event late February. The lemon print felt symbolic, as the fruit signifies abundance, prosperity, and good luck. Lemons are also seen as capable of getting rid of negative energy, which felt timely as the Duchess of Sussex prepared to address her step back from her role as a working royal and her experience as a target of British tabloid media.

At the time, Elizabeth Holmes, author of HRH: So Many Thoughts on Royal Style, also pointed out that Markle's outfit was called the 'Primavera' dress, and Queen Elizabeth's wedding dress was inspired by Botticelli's painting Primavera. As Primavera means spring in Italian, it could be a nod to rebirth — or a tribute to the Queen even.

It’s notable that Jill Biden chose to wear such a conspicuous and meaningful print so soon after Markle’s appearance. Regardless of whether or not it was intentional, a matching moment between two strong women is hard to ignore. And the world is certainly thrilled to see it.