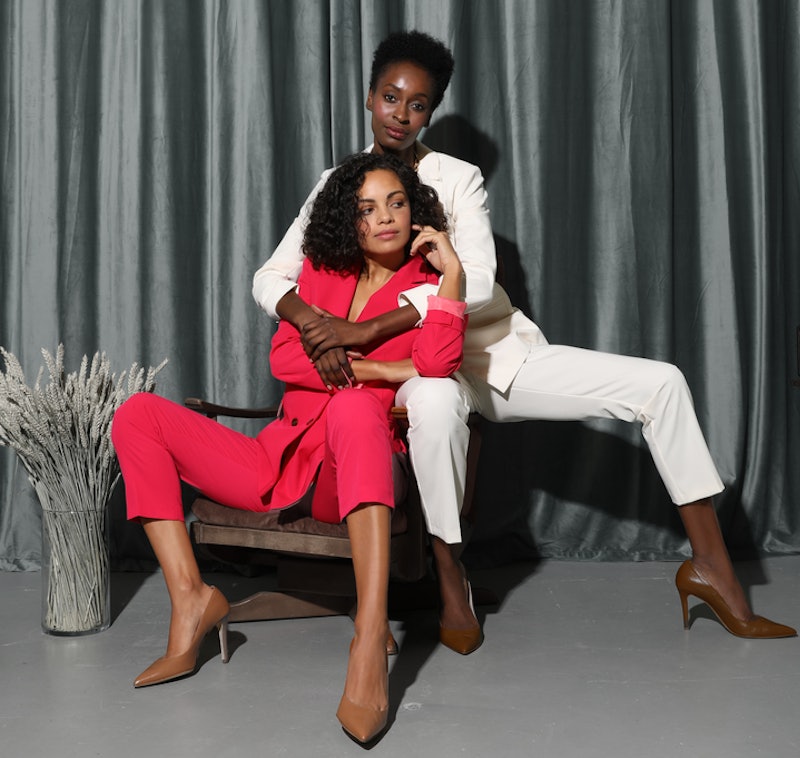 When Jamela Acheampong received a piece of business advice from her father, it struck a chord.

“My dad has always said that some of the best ideas are the ones that solve a problem,” Acheampong, tells Bustle.

So, when the designer was looking for nude accessories five years ago, only to see the same shades over and over again, a light bulb turned on.

“Although I was in search of items that matched my dark skin tone, all I kept coming across were the same beige, cream, and tan shades,” she says. “It was overtly clear that ‘nude’ had a type. The fact that the term ‘nude’ is attributed to a specific shade is a problem.”

Acheampong got to work building Kahmune, an inclusive luxury shoe line founded in 2015 that recently expanded into handbags and has a celeb following that includes Lupita Nyong'o and Tia Mowry. Her goal? To provide people of color with a true nude option with 10 skin tone hues.

Kahmune is a play on the word “commune,” which comes from the word community. “I wanted a name that signified unity,” she says. “The fashion and beauty industries have been built on exclusion, and I personally believe it is high time we changed that. Kahmune is about being inclusive."

To facilitate the brand’s growth, Kahmune was recently selected as one of six recipients of Stitch Fix’s grant and mentorship program, Elevate. The program launched in October 2020 to promote a more equitable and diverse retail landscape for the next generation of BIPOC designers.

“As a solo founder of my first business, there is so much I don’t know, and the mentorship and guidance this program provides will be invaluable as I continue to scale my brand," Acheampong says. "Additionally, I have a goal to grow my staff and expand the brand’s social media presence through the $25,000 grant.”

From the handbag line, Acheampong particularly loves the sleek tote. “I carry it everywhere,” she says. “For smaller trips, the zippered pouch that comes with it is perfect. I also love our slingback that we released as part of a past collection.”

Long-term, she’s focused on expanding Kahmune to become the go-to destination for all things nude. “I want Kahmune to be a brand all women can see themselves reflected in,” she says. “My vision is for Kahmune to be the world’s first marketplace for all skin-tone fashion.”

Many industries, including fashion, were getting behind Black-owned businesses last summer amid the protests for racial justice. Acheampong appreciates those efforts, while making it clear that the road ahead remains long.

“Across the retail industry, there is a need for even more programs rooted in creating sustained change and providing BIPOC businesses with long-term support and resources," she says. "It will be important to keep the conversation going on what tangible steps can be taken to support Black-owned businesses — not only now but forever.”