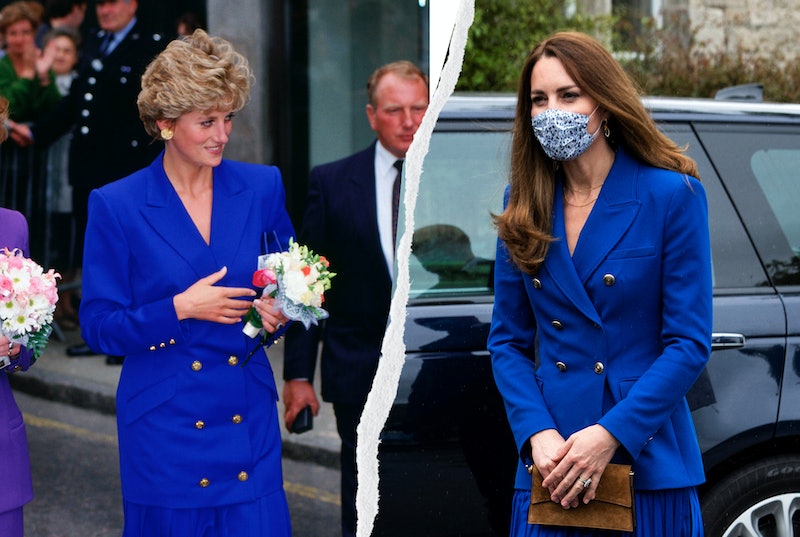 Kate Middleton is the first major royal fashion icon since Princess Diana. And while the mother-of-three did not have the pleasure of meeting her late mother-in-law before her untimely death, she surely would have made Diana proud — especially when it comes to her style. Kate Middleton channels Princess Diana with so many of her looks, whether it's an outright homage or simply a case of inspiration.

While she might not have pushed as many boundaries as her late mother-in-law, Middleton has given more than a nod to some of Princess Diana’s most iconic looks. In fact, on many an occasion, she has styled herself in looks that are nearly identical to those worn by Princess Di decades earlier.

Princess Diana was known for her head-turning wardrobe, from being one of the first to wear jeans to casual events, to her penchant for British designers that she championed through her dress. As such, Middleton has done the same, effortlessly taking the traditional rules of royal dress code and making them her own.

Throughout her years in the public eye, Middleton has chosen quite a few colors and silhouettes that Diana gravitated toward as well. What’s more, the Duchess of Cambridge has had many on-the-nose moments during which it seemed as though she had shopped Princess Diana’s actual closet.

Ahead, find every time Kate Middleton channeled Princess Diana with her style.

This article was originally published on April 2, 2020