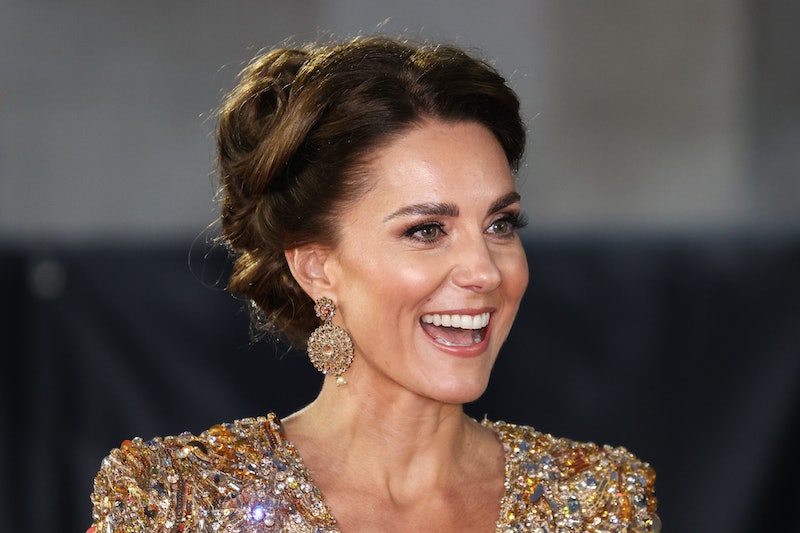 Kate Middleton and Prince William made a rare red carpet appearance, stepping out in full glam for the premiere of No Time to Die in London on Tuesday evening. For the event, Middleton slipped into a fully embellished gold sequin gown from Jenny Packham. Prince William chose a classic black tuxedo with a bow tie.

Though the pair spends most days in the public eye, it’s rare that they hit an actual red carpet as guests to an evening event, like a movie premiere. And especially post-lockdown, where most of the world spent every day in leggings and sweats, Middleton’s choice to embrace full-on glamour when it came to her red carpet event style was a significant one.

Middleton’s Jenny Packham gown was gold, head-to-toe, making her look almost like a Bond Girl herself. The cape and textured updo also channeled another fictional character: Queen Daenerys Targaryen from Game Of Thrones.

Middleton’s regal look was embellished with beads allover including the caped silhouette that cascaded behind her. Though she wore little jewelry to speak of, her circular hanging earrings were the work of Onitaa London.

Iconic on its own, Middleton’s gold floor-sweeping dress also bore a striking similarity to a Princess Diana outfit from the premiere of A View to Kill, the James Bond film that premiered in 1985.

As Elizabeth Holmes, author of HRH: So Many Thoughts On Royal Style pointed out, Princess Diana chose a metallic silver gown for her Bond Girl appearance. Designed by Bruce Oldfield, it boasted a similar plunging neckline to Kate’s light-catching gown, long sleeves, and a totally open back.

As the ultimate British power couple, it seemed appropriate that Kate Middleton and Prince William chose a James Bond film premiere as their first pop culture outing. Middleton’s choice of Jenny Packham seemed apt as well, as the Duchess has worn the British designer more often than most.

She’s worn a blue sheath dress at Armistice Day in 2018, a green sequin dress at at a reception in Pakistan in 2019, a stunning blue lace back gown in New York City in 2014, and a turquoise gown to the Tusk Conservation Awards in 2018. It appears Middleton and the British designer are truly a match made in red carpet heaven.