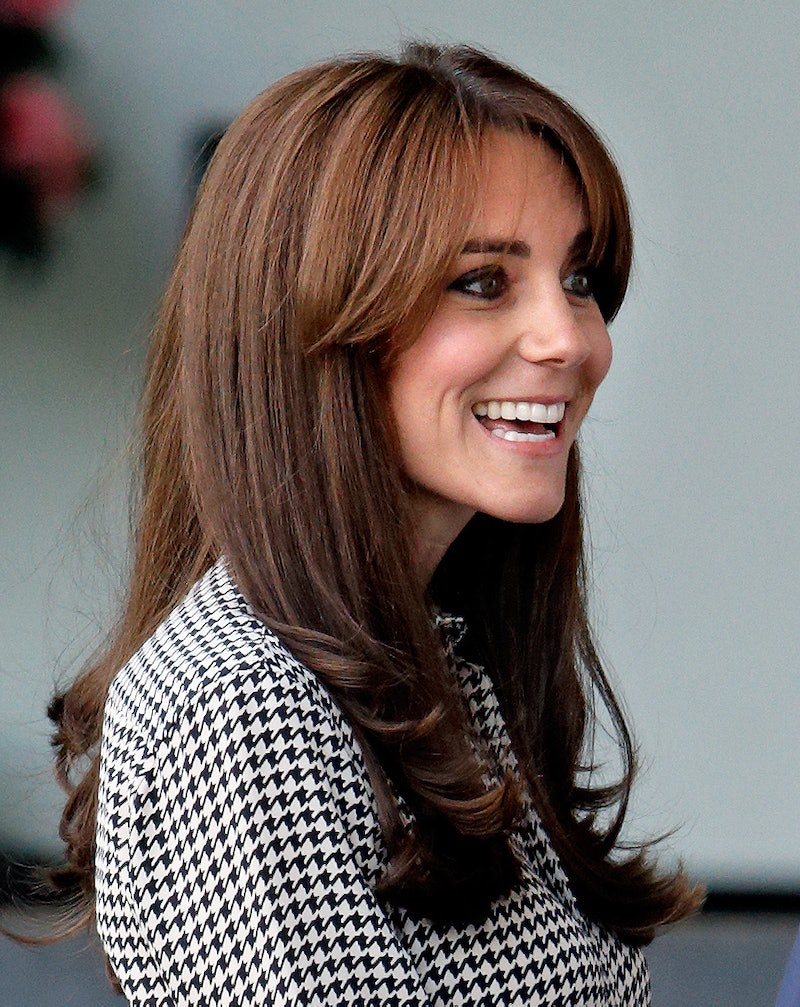 Bottleneck Bangs — or a Bottleneck Fringe, to us tea-drinking folk — has become a leading hair trend of 2022. The hybrid style between curtain bangs and a full fringe has been seen on celebrities such as Margot Robbie and Alexa Chung. Leading the way, the Duchess of Cambridge has sported a fringe on many occasions over the years. In a hairstyle Bustle has coined the “Royal Shag,” Kate is known to favour a sweeping off-centre parting fringe, which is sleek but purposely relaxed. She has emulated this not-quite-perfect fringe at many key engagements. But what is the difference between Kate’s fringe and the current Bottleneck Bangs trend?

“Bottleneck Bangs are a hybrid between a full and grown-out fringe,” celebrity hair stylist George Northwood told British Vogue. “It gets longer at the sides, and essentially morphs into a grown-out fringe. Basically, it’s a fringe that offers the best of both worlds.”

“This hairstyle takes inspiration from the neck of a bottle, starting slim and short in the middle, curving longer around the eyes, and then is longest following the line of the cheekbone,” Tom Smith, celebrity hairstylist and European creative director for Evo Hair, told Bustle. “This allows the length and angle to be adjusted depending on whether you want to make your cheekbones appear wider or stronger.”

In 2015, the Duchess cut in a wide curtain fringe that she kept swept to the side. According to tabloid reports at the time, she immediately regretted it, calling it her “mum fringe” following the birth of Princess Charlotte, so it didn’t take long for her to experiment with other styles as she tried to grow it out. We don’t mean to disagree with royalty, but we were very much fans of the look.

Meanwhile, in 2020, Kate trimmed her famous brunette locks with another sweeping fringe, which skimmed her cheekbones and framed her face without appearing too heavy.

As of late, the Duchess of Cambridge has been sporting a no-fringe hairdo, styling her long, brunette tresses in loose curls. We’ll have to wait and see if she revives the Royal Shag once more.

More like this
Yes, You Can Buy Off-White’s New Beauty Range In The UK
By Tomi Otekunrin
How To Style Your Hair For A Festival, According To Maya Jama’s Hairstylist
By Tomi Otekunrin
Aesop's Queer Library Is Open
By Tomi Otekunrin
Kiehl’s Just Launched Eco-Friendly Cleansing Bars
By Jessica Morgan
Get The Very Best Of Bustle/UK