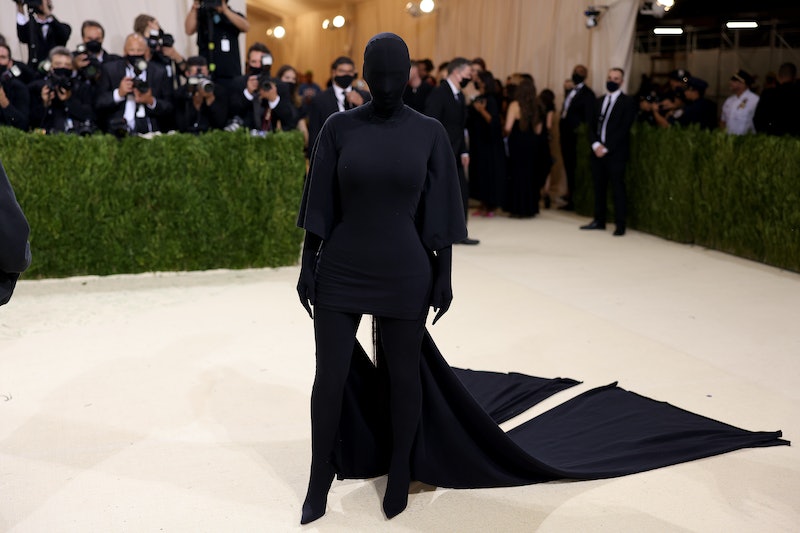 The Kardashians are red carpet staples, so it’s no surprise that multiple members from the family attended the 2021 Met Gala this evening. And before even stepping foot on the steps of the Met, Kim Kardashian already sparked thousands of tweets theorizing the meaning behind her outfit.

Kardashian made her way on down to the Met Gala in all-black ensemble that turned heads and raised eyebrows for its mysterious meaning. Covering her entire body — yes, head to toe including face — the dress strongly resembled the one she wore during Kanye West’s Donda event last month. This time, rather than made of white, this version was constructed entirely of black fabric.

Fans quickly took to Twitter to brainstorm: Does this mean the couple is officially back together after Kardashian filed for divorce? Is it just a PR stunt? Will we actually get an answer, or will the Kardashians leave us with a million questions and countless possibilities?

One thing’s for certain: The Kardashians always know how to break through the noise and cause a conversation to erupt. And that most certainly was the case for this evening.

Kardashian seemed to enjoy reading the tweets and memes as much as her fans, and she had the best response to all the chatter. “What’s more American than a T-shirt head to toe?!,” she posted on Instagram, before sharing a few of the tweets on her IG stories.

Below, scroll down for the posts she shared and other reactions from fans trying to understanding the meaning behind Kardashian’s outfit:

Kardashian shared this tweet on her IG stories after admitting she really couldn’t see Kendall through her full-face mask, but could faintly make out the outline of her sister’s sparkly dress.

Fashion For Your Nerves

When the feeling of being on edge follows you around in style...

Sorry, Do I Know You?

If you can’t recognize your own sister, maybe cut out holes for your eyes next time, Kimmy.

The Best Reaction Of All

Twitter wins with this play on Kourtney’s famous retort to Kim stressing out about her missing diamond: “Kim, there’s people that are dying.” Except this time the second eldest Kardashian sister is dressed in a Batman uniform ready to save them all.

Could It Be True?

Well, October is right around the corner after all.

That may be more camp than “In America: A Lexicon on Fashion”...but werk.

A Ryan Murphy Collab In Action?

Fans want to know: Is Kim bare faced beneath there, or is she in full glam?

Could A Reveal Be Coming?

She Is The Moment

No question about that!

Is It Merch, Maybe?

And when can we purchase our own?

This article was originally published on Sep. 14, 2021