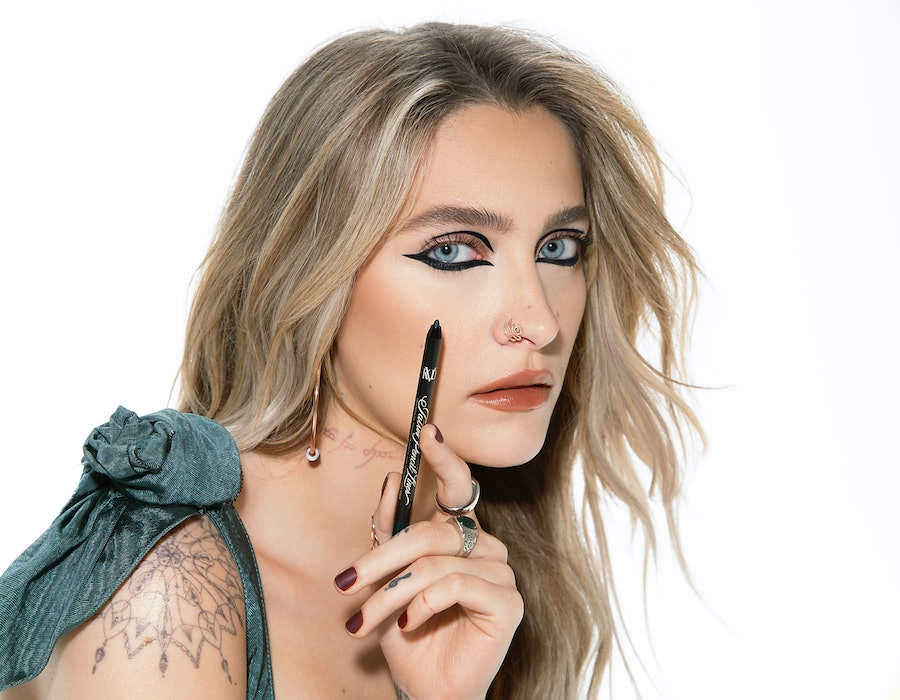 Paris Jackson turned 24 this week, and has already traveled the world, appeared on the covers of international magazines, released an album, and gotten so many tattoos that she’s lost count. And while it may seem surprising that the singer and model has never partnered with a beauty brand before, today indeed marks her first professional foray into the cosmetics industry.

As the daughter of the King of Pop, she’s embraced her platform more in recent years and used it become an outspoken advocate for the environment (she encouraged the crowd at the 2017 Grammy Awards to join the Dakota Access Pipeline protests), anti-racism, and cruelty-free brands (she’s starred in campaigns for Stella McCartney, a designer who’s notably reimagined leather-free luxury).

Now, Jackson is the face of the new KVD Beauty Tattoo Pencil Liner. “I feel like teaming up with KVD made the most sense, not just [in terms of] my aesthetic and the tattoos,” she tells me over the phone, “but also because of the underlying things like being environmentally-friendly, being a vegan and cruelty-free brand, and celebrating artistry and diversity.” Available on April 11, 2022 in an array of 10 matte hues that range from a rusty red to the inkiest black, the launch is a new iteration of the brand’s best-selling liquid eyeliner inspired by the two foundations of tattoo artistry, lining and shading.

Currently on tour, Jackson has found that the Tattoo Pencil Liner has played a key role in her stage looks and its versatility lends itself to her experimental mood. “I'm trying new things with my music, trying new roles when I go out for auditions, and finding new ways to express myself with the grunge-rock look,” she says. Her setlist is all new tunes that she notes are quite the opposite of the ethereal, almost-whispered vocals heard on her debut album Wilted: “It’s louder, grungier, there’s a lot more rock influence, and I’m screaming.”

At the same time, the “Let Down” singer is mindful about being too impulsive. I ask her just how many tattoos she has and she responds that it’s a fantastic question. (She lost count a few years ago, but guesses that number is in the eighties.) And while each piece of her permanent body art holds special meaning (from odes to rock legends John Lennon and Mötley Crüe to flowers), she’s not in the market to get more ink any time soon. “I try to be careful, in general, about being impulsive,” she says. “I have four Aries placements, two in my major. So I'm just already a very impulsive person and I probably don't need to like get [another] tattoo. I used to say, ‘I want a tattoo right now,’ and then it would happen. But I'm trying to chill out with that.”

She’s excited for her continued work with KVD Beauty after leading this first Tyrell Hampton-shot campaign, but always looks to the beauty within first. “Beauty wise, [my inspiration comes from] the people that I see day-to-day that I enjoy being around because I see how they treat other people and I like to see how they treat themselves,” she says. “I like to see the kindness that comes out of some people. That's what inspires me, and that's what I think beauty is.”

The KVD Beauty Tattoo Liner Pencils ($22 each) will be available at KVDVeganBeauty.com, and in store and online at sephora.com on April 11, 2022.

More like this
The Best Beauty Looks Spotted At Paris Couture Week 2023
By Audrey Noble
Amanda Gorman’s Makeup Artist Breaks Down The Poet's 2023 Grammys Glam
By Olivia Rose Rushing
Kim K, Oprah, & Jennifer Lopez Celebrated 25 Years Of Anastasia Beverly Hills
By Olivia Rose Rushing
Pamela Anderson's Most Iconic Makeup & Hairstyle Moments
By Olivia Rose Rushing
Get Even More From Bustle — Sign Up For The Newsletter
From hair trends to relationship advice, our daily newsletter has everything you need to sound like a person who’s on TikTok, even if you aren’t.