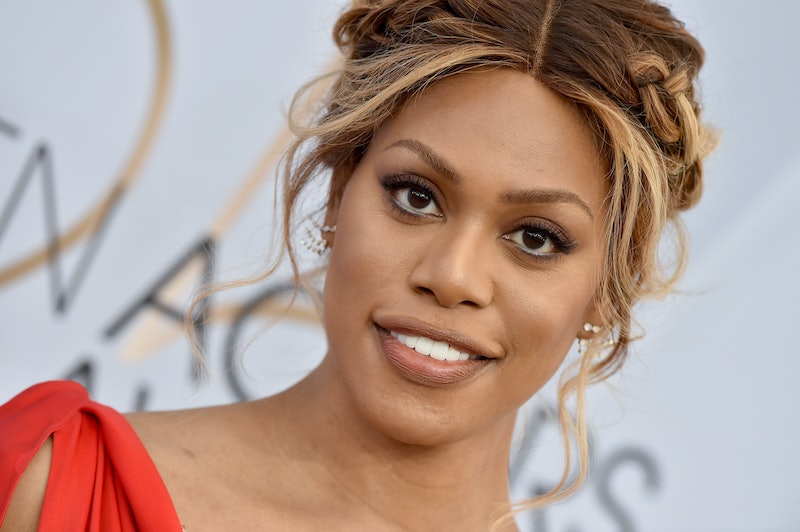 The Pose star made a virtual appearance at the show, and Laverne Cox's 2021 Golden Globes dress still managed to steal the spotlight — even if it was happening via video call.

Standing in front of a mirror so you could see the back of her dress (clever!), the actress opted for a floor-length scarlet red gown with a plunging neckline and intricate beading. But it was the sleeves of the dress that really popped and created some visual drama.

Cox gabbed with red carpet host Karamo Brown about her obsession with the Netflix hit Bridgerton.

"What I think is brilliant about it is that it's a period piece that is so much fun," she said. "The music [...] could be a Britney Spears song with a string quartet and played in a very baroque way. So, I love the music."

She also discussed her not-so-secret crush on the duke, aka Regé-Jean Page. She said what everyone's thinking — that "the duke is insanely fine" — though she did take a moment to applaud Page's skills as an actor as well.

"I'm trying to like, pull it back," Cox said. "I've said a little too much about the duke publicly. I respect him so much as an actor, who's an incredible artist and very, obviously, easy on the eyes."

When Brown suggested that the two would make a cute couple, Cox immediately shut that down. "Karamo, I'm dating someone now," she said. "I actually have a man. We are not disrespecting my man. I can admire the beauty of someone else, but I am taken at the moment."

Fair enough. In fact, a Laverne Cox appearance in Bridgerton Season 2 would be divine, especially if she brought back this superhero gown for the occasion.