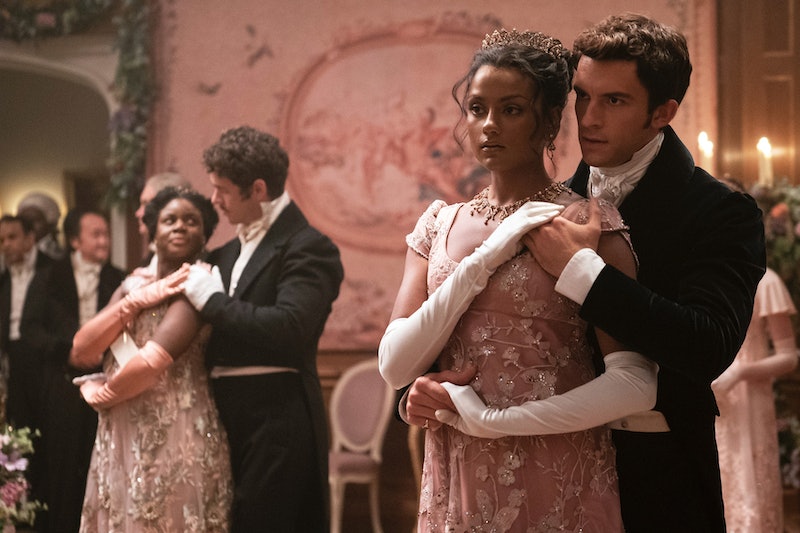 Bridgerton was Netflix’s breakout hit of 2020 thanks to its perfect blend of steamy sex scenes, period setting, and dramatic storylines. The Regency-era romance drama quickly crushed viewership records for the streaming service, with 82 million households around the world watching in its first four weeks. Almost immediately, it made Regé-Jean Page a household name and turned the words “I burn for you” into a catchphrase.

Based on a bestselling Julia Quinn romance novel series, the first season of Bridgerton follows the debut matchmaking season of Daphne (Phoebe Dynevor), the eldest daughter of the wealthy Bridgerton family. As she tries to lure eligible suitors to find a good husband, her elder brother Anthony (Jonathan Bailey), now the man of the house after their father’s death, gets in her way with his overbearing overprotectiveness. Enter Anthony’s old friend Simon Basset (Page), the Duke of Hastings. He’s vowed never to marry, so of course Daphne and Simon strike up a deal to be in a fake relationship. And of course they fall in love.

In its sophomore season, the series is turning its eye to another love story, as previewed in the first-look Netflix unveiled on Sept. 25. Here’s everything we know about Bridgerton Season 2.

On Dec. 25, exactly one year after Bridgerton premiered, Netflix and Shondaland marked the occasion by revealing when fans can expect Season 2. In a short video featuring beloved members of the cast, they read out loud the latest issue of Lady Whistledown’s Society Papers, which reveal some very exciting news: Bridgerton will return to the streaming platform on March 25, 2022.

Filming for Bridgerton Season 2 began in March 2021 and, despite some setbacks due to COVID, things are on track. Over the summer, sneak peeks of the Bridgerton cast in action emerged online, including pictures of Nicola Coughlan and Jessica Madsen, who played leading roles in Season 1, alongside new cast members Melissa Advani and Priya Kansara at Greenwich's Old Royal Naval College. Similarly, Phoebe Dynevor was spotted on location in Greenwich looking serene as Daphne.

What Will Bridgerton Season 2 Be About?

When Regé-Jean Page announced that he wouldn’t be returning to Bridgerton as Simon Basset it left fans wondering where the show could go in Season 2. However, you might be about to develop another die-hard crush in Anthony Bridgerton, AKA Daphne’s slightly reckless older brother.

Bailey confirmed to ET in January that Season 2 will follow the plot laid out in Quinn’s second book, The Viscount Who Loved Me, and the Season 2 synopsis from Netflix reads:

“The second season of Bridgerton follows Lord Anthony Bridgerton (Jonathan Bailey), the eldest Bridgerton sibling and Viscount, as he sets out to find a suitable wife. Driven by his duty to uphold the family name, Anthony’s search for a debutante who meets his impossible standards seems ill-fated until Kate (Simone Ashley) and her younger sister Edwina (Charithra Chandran) Sharma arrive from India. When Anthony begins to court Edwina, Kate discovers the true nature of his intentions — a true love match is not high on his priority list — and decides to do everything in her power to stop the union. But in doing so, Kate and Anthony’s verbal sparring matches only bring them closer together, complicating matters on both sides. Across Grosvenor Square, the Featheringtons must welcome the newest heir to their estate while Penelope (Nicola Coughlan) continues to navigate the ton whilst keeping her deepest secret from the people closest to her.”

The sexual tension between Kate and Anthony was put on full display in a teaser clip of their first meeting.

While fans will miss the brooding presence of the Duke of Hastings in Season 2, many fan favourites will be returning.

Nicola Coughlan is back as Penelope Featherington and speaking to Entertainment Tonight she said of the new series: “It's got a whole lot spicier I will say. You definitely see more sides to her. We find out at the end of Season 1 [that she's Lady Whistledown], that is there but we don't get to explore it. But the world cracks open. I feel like the Bridgerton world has grown and you're going to see a lot more sides to her. She's a sassy chick.”

Phoebe Dynevor, Claudia Jessie, and the rest of the Bridgerton family are set to return, also, alongside Adjoa Andoh as Lady Danbury and Golda Rosheuvel as Queen Charlotte.

Alongside these familiar faces, the world of Bridgerton is about to get a lot bigger with a number of new actors joining the show.

Simone Ashley enters the show as leading love interest, Kate Sharma. It’s likely that you’ll recognise Ashley from Sex Education. Netflix teased more details about the character in a tweet about the announcement, writing, “Get ready to fall in love with Simone Ashley, who will play Kate in Season 2 of Bridgerton. Kate is a smart, headstrong young woman who suffers no fools — Anthony Bridgerton very much included.”

Charithra Chandran will play her sister Edwina, and Shelley Conn will play their mum. Derry Girls’ Calam Lynch and Rupert Evans from Charmed will also join the show.

Netflix released the first official Season 2 trailer on March 9. The three-minute teaser sets up the central relationship Lord Anthony and Kate. Lord Anthony begins courting Kate’s younger sister, Edwina, but Kate is skeptical of his intentions, leading to prolonged tension that of course develops into sparks.

Bridgerton’s soundtrack of pop hit turned into classical bops is another much-loved element of the show, and that won’t change in Season 2. On March 4, Netflix’s Tudum revealed the list of all your favorite instrumental pop covers that will be featured in the upcoming episodes, including:

Of all the new songs, Styles’ 2017 hit, “Sign of the Times,” proved to be the trickiest to secure, according to Bridgerton music supervisor Justin Kamps. “That one was a pretty difficult clearance. That one took the longest to get everyone to sign off on,” Kamps told the streamer’s editorial site of the track that plays during a “climactic moment” of the sophomore season. “I think everyone will really love it. Even for these songs that are just huge songs that everyone knows, [an instrumental version] still breathes new life and brings them to a new audience, and in a different way.”

So There Will Be Eight Seasons In Total?

Julia Quinn’s Bridgerton book series is made up of eight novels, each one telling the story of one of the children of the late Viscount Bridgerton. The first adaptation looked at Daphne and Season 2 will focus on Anthony. However, that still leaves Benedict, Colin, Eloise, Francesca, Gregory, and Hyacinth to have their time in the spotlight.

And it would seem that Bridgerton’s showrunner Chris Van Dusen isn’t closed off to the idea of extending the series. He told Collider, “The first season was primarily about Daphne and her love story with Simon. But, this being a family of eight children and there being eight books, I would love to be able to focus and really tell stories and love stories for all the Bridgerton siblings. For each character, for sure ... I would love that. In success, I would love that.”

We would, too, Chris!

This post will be updated with additional plot and cast details as more information on Bridgerton Season 2 become available.

More like this
'Stranger Things' Season 5 Will Echo Season 1 In A Key Way, The Duffer Brothers Confirm
By Kadin Burnett and Sophie McEvoy
Here’s How You Can Watch Season 3 Of 'Never Have I Ever' In The UK
By Frances Stewart
One Of 'Selling Sunset's New Cast Members Just Had A Baby With Nick Cannon
By Orla Pentelow and Brad Witter
This 'Sex Education' S4 Update Is Everything You Were Hoping For
By Bustle UK
Get Even More From Bustle — Sign Up For The Newsletter

This article was originally published on Dec. 30, 2020