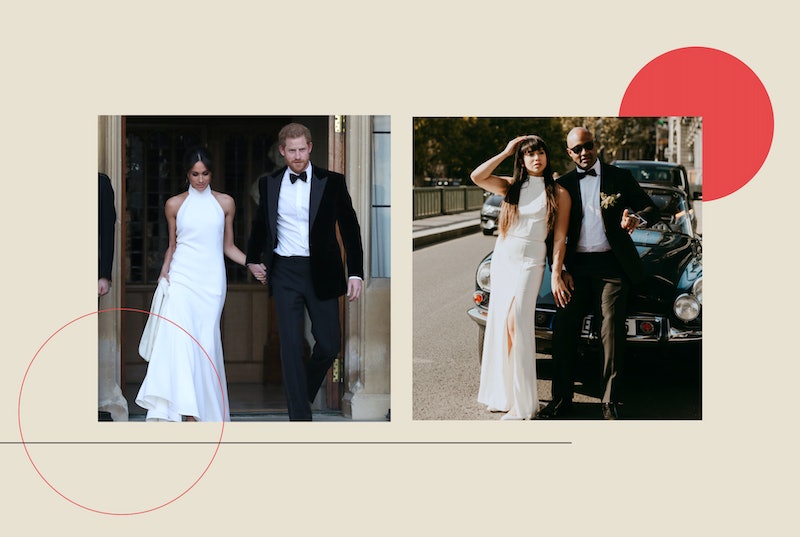 I vividly remember where I was when I watched Meghan Markle and Prince Harry’s royal wedding. My cousin had just graduated from her master’s degree program that weekend, and I was staying in nearby Philadelphia at a downtown hotel. Despite staying up late the night before celebrating her graduation, I set my alarm for 6 a.m. on Saturday morning, eager to watch the ceremony.

As a fashion writer and longtime fan of Markle’s personal style, I was most excited to see which dress she would choose for her big day. I was particularly invested, too, as a newly engaged bride-to-be myself. I was well aware that whatever the Duchess of Sussex wore, the so-called “Markle Sparkle” effect would reverberate across the wedding industry, single-handedly shaping the styles and silhouettes that thousands of brides would wear themselves. What I didn’t know, however, was that Markle would end up directly influencing my own wedding attire.

When she stepped out of that luxurious Rolls-Royce Phantom IV in a bespoke gown designed by the British fashion designer Clare Waight Keller (who was, at the time, artistic director of Givenchy, a post she recently stepped down from in April), I must admit I was initially a bit disappointed.

Although the silk dress — with its open boat neckline, three-quarter sleeves, and silk organza underskirt — was very beautiful, I was not-so-secretly hoping for a little more oomph. Maybe a few expertly placed Swarovski crystals? A few pops of tulle? Or a hint of lace somewhere?

However, as the ceremony commenced, and Markle walked down the aisle at St. George’s Chapel, the simple, elegant design began to win me over. Like a true style icon, it was the accessories she chose that really elevated the look. Her 16-foot, hand-embroidered veil was anchored by Queen Mary’s bandeau tiara, which featured both large and small diamonds, with an art deco-inspired center stone that’s actually a brooch. Those add-ons completely stole the show and gave me a newfound appreciation for the “less is more” philosophy.

I began trying on dresses about a year before my September 2019 wedding in Paris. The only thing I was certain about was that I wanted two dresses: one for the ceremony, another for the reception. For the ceremony, I knew that I wanted to have my “princess moment.” I wanted the big, poofy gown with lots of tulle and a cathedral-length train. My thinking was: How many times in your life can you wear something so over-the-top and it’s completely acceptable? I was definitely going to lean into the extravagance.

For the reception, though, I wanted to go in the complete opposite direction. The ceremony is so short compared to the reception, which meant that functionality was my number one priority. I had to be able to move freely and comfortably. I didn’t want to be worried about dragging around pounds of tulle or lifting up a too-heavy skirt when I hit the dance floor. As I started to think through what my ideal reception dress might look like, I found myself coming back to the same reference point over and over again: the second dress that Markle changed into for the private reception she and Prince Harry hosted later in the evening.

Although her second dress didn’t receive as much attention or fanfare, the minute I saw it, I knew that was the exact look I was going for. She wore a stunning silk crepe gown by Stella McCartney, which featured a high neck, an open back, and a floor-grazing skirt. I immediately fell for the ultra modern bridal ensemble, which struck the perfect balance between ease and elegance. It became my life’s mission to find a copycat version (commissioning a custom gown from McCartney was, unfortunately, not within my budget).

Thankfully, my search wasn’t as arduous as I thought it would be. BHLDN had produced a dress that was nearly identical to Markle’s, and it was among the first dresses I tried on in-person. As soon as I was zipped in and saw myself in front of the three-way mirror at the bridal boutique, there was no denying that I’d found the one. (And at just $220, it was an absolute steal compared to most other options.) As an added bonus, the dress fit nearly perfectly off-the-rack and required minimal alterations. One adjustment that I’m glad I invested in was the addition of bra pads, which helped create a clean and refined look overall.

At first, I thought about sprucing it up with some bold accessories — maybe a feather bolero or a blinged-out belt. But given that I was trying to channel Markle’s minimalist approach, I ultimately opted to let the dress speak for itself. For my reception, I paired it with an embellished velvet headband from Zara and round-toe pumps with a metallic gold finish on the heels by Karl Lagerfeld.

Because I am all about executing a look as authentically as possible — and because I’m just extra by nature — when my husband asked what he should wear for our big day, I told him the classic black tuxedo à la Prince Harry was the way to go (he purchased his from Suitsupply). And although we couldn’t find a vintage, icy blue Jaguar E-Type to ride around in for our “just married” moment, I think we fared pretty well with our Citroen DS convertible from the same era.

While quite a bit has changed since Markle’s fairytale wedding and she’s no longer a working royal, I’ll forever be grateful that her timeless style helped me sort through all the bridal chaos to land on the perfect wedding dress. And since it happens to be her birthday, I’ll be raising a glass to the Duchess and her effortless grace that is sure to inspire brides everywhere for years to come.

More like this
'Bachelorette' Vet Clare Crawley Unveiled 2 Special Wedding Day Accessories
By Stephanie Topacio Long
Jennifer Lopez Wore A Naked Dress To The Shotgun Wedding Premiere
By Dominique Norman
Hailey Bieber Went Pantsless In A Hoodie By Justin's Brand Drew House
By Dominique Norman
Bella Hadid Styled Her Slinky Black Bikini To Perfection
By Allie Fasanella
Get Even More From Bustle — Sign Up For The Newsletter
From hair trends to relationship advice, our daily newsletter has everything you need to sound like a person who’s on TikTok, even if you aren’t.