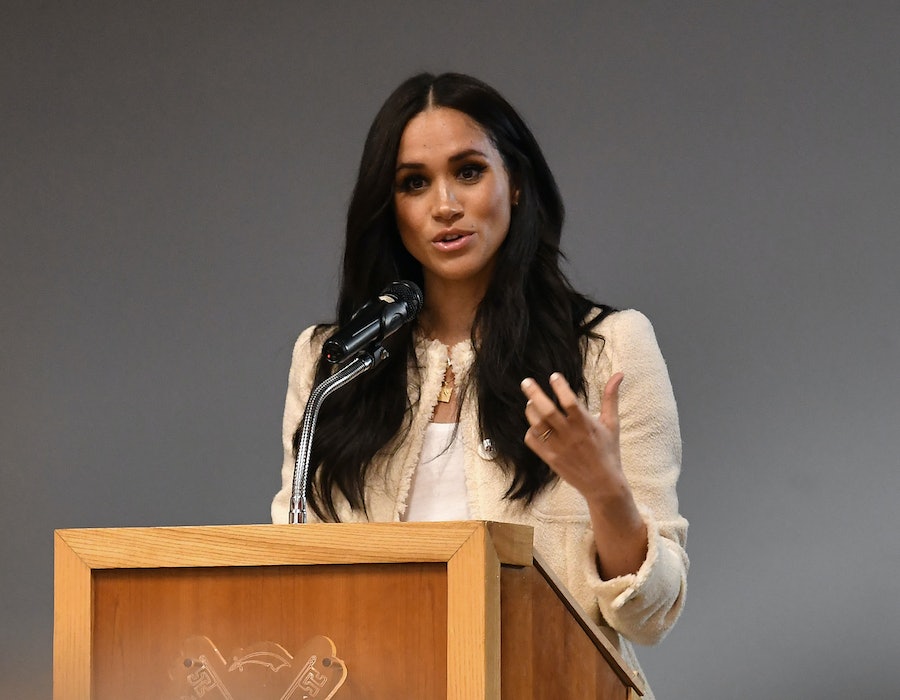 Meghan Markle is no longer a senior member of the British Royal Family, but that doesn’t mean she’s any less of a public figure. These days, the former Duchess of Sussex is maintaining a relatively low profile in her new home base of Los Angeles. But now that she’s a little more removed from the monarchy, she’s been speaking out more frequently about social issues like Black Lives Matter — and her fashion seems to be sending a message as well.

Last month, Markle delivered a commencement address via Zoom to the 2020 graduating class of her alma mater, The Immaculate Heart High School. In it, she gave her first official statement about the killing of George Floyd and the Black Lives Matter movement. For the occasion, she wore an all-white ensemble consisting of a white tank and cardigan, accessorized with a Taurus charm necklace (Archie’s zodiac sign). She was also previously spotted wearing white to help prepare meals at the LA-based organization Homeboy Industries, which offers rehab and re-entry programs for former gang members. And then, earlier this week, the Duchess sported a crisp white button-up when she and Prince Harry helped facilitate a discussion about BLM and race relations for the Queen’s Commonwealth Trust.

Markle addressed the insidious nature of racism during the Zoom event. “It’s not just in the big moments, it’s in the quiet moments where racism and unconscious bias lies and thrives,” she explained. “It makes it confusing for a lot of people to understand the role that they play in that, both passively and actively.”

Although some might write off these white outfits as a mere coincidence, it’s important to note that Markle has always been keenly aware of the narratives her wardrobe choices can create. In one of her final appearances as a working royal, she stepped out in a vibrant, head-to-toe green look that was a nod to her late mother-in-law Princess Diana.

So what’s the deeper meaning behind her white wardrobe as of late? Well, women have donned white to champion various causes throughout history, most notably during the Suffragette Movement of the early 20th century. One hundred years later, a group of Democratic Congresswomen wore suffragette white in protest at Trump’s 2019 State of the Union address.

And just last month, thousands stepped out in white to show their support for Black trans lives at the Brooklyn Liberation march. “In the 1917 Silent Parade, the men wore black while women and children wore white,” West Dakota, a co-organizer of the march, explained in a statement. “The decision to wear white was to symbolize our unity, and also to take a stand against corporate appropriation of the rainbow flag. We don’t need rainbow [merchandise] to show our pride.”

Given the historical significance of wearing white and the role it continues to play in shaping the collective discourse, it should come as no surprise that Markle is sporting the classic hue now more than ever.