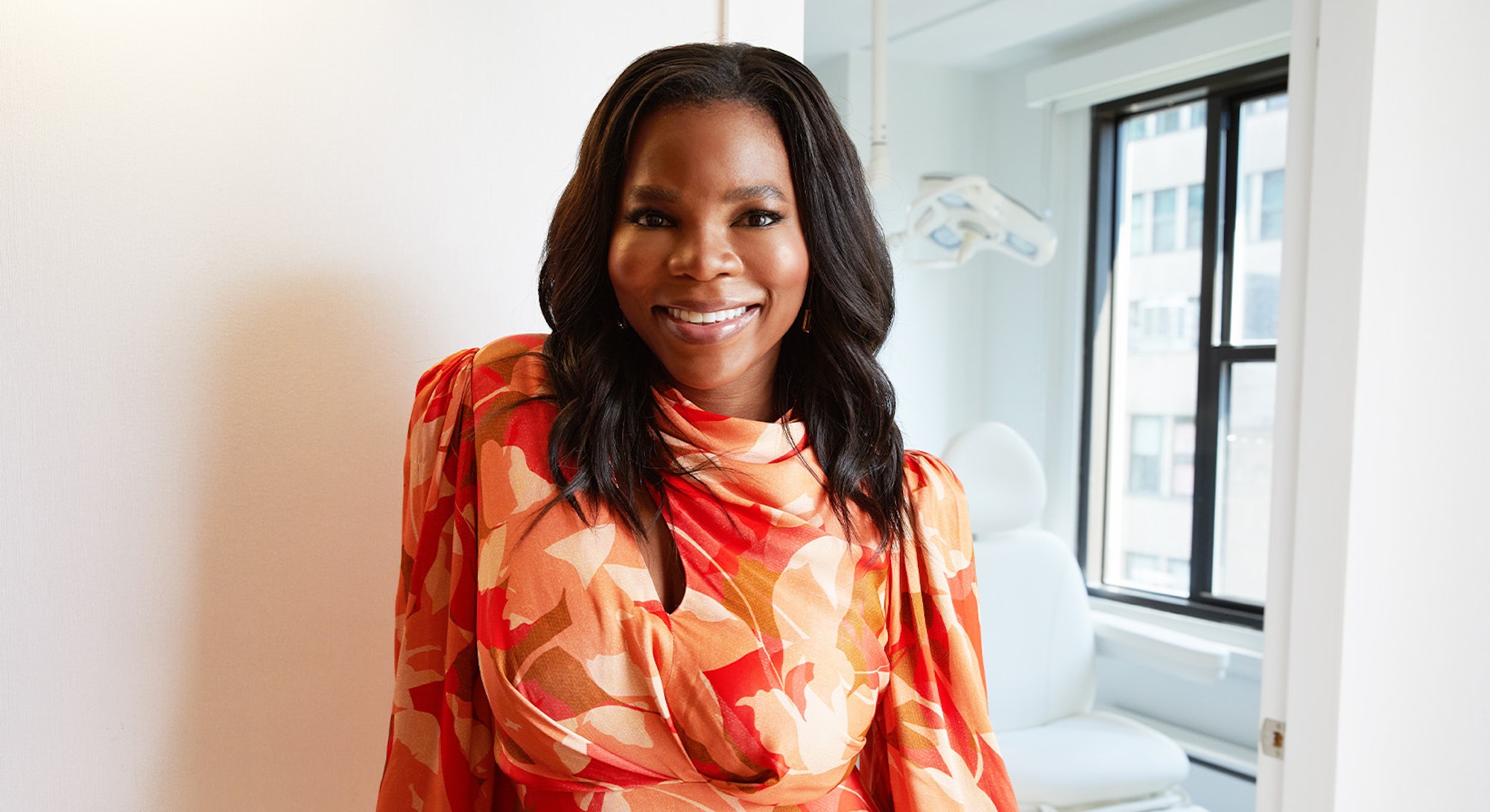 Most doctors’ offices are staid and sterile, offering little in the way of decor or comfort. But not the one occupied by Dr. Michelle Henry, M.D. Her space is decidedly sleek — awash in white walls, accented with a marble fireplace, bedecked with orchids and plush cream furniture. Fiji water bottles are perfectly arranged on a credenza; Jo Malone soaps sit in the bathroom. It’s fitting, then, that the board-certified dermatologist greets me in a sleeveless orange dress and Chanel espadrilles, rather than your typical pair of scrubs, as she ticks off a few of the procedures — liposuction, lip lifts, hair transplants — that she’s trained in.

“I’m really procedurally-oriented,” she says. “I think that definitely makes me stand out.”

The way Henry communicates — be it with a patient, on television, or during interviews — does too. “I remember early on [in my career] listening to what my patients would say about me,” she says. “They would say, ‘You seem like a really good friend who just happens to be really smart.’ And so I always leaned into that.”

That bedside manner has served Henry well. As a leading dermatologist and skin expert for models, beauty editors, and skin care-enthused New Yorkers, Henry has been tapped by the New York Times to share dark circle cures, appeared on Good Morning America to discuss pandemic-induced “maskne,” and counts fashion insiders like Veronica Webb among her devoted patients. The night before this interview, a news outlet asked Henry to do a segment on Jennifer Lopez’s butt balm; she headed to the office to film it at 7:45 a.m.

Webb, who met Henry in 2018, sees the dermatologist monthly to monitor and treat her melasma. “Very often, when people have a patient who is well known, especially in the fashion industry, they want to go fast,” Webb says. “They feel like they’re under a microscope when they have someone like me in their practice. [But] we worked very slowly and very carefully.”

In recent years, Henry has also gained prominence for research aimed at optimizing dermatological procedures for dark skin tones. “A lot of lasers and injectables go on the market without being used on Black patients,” she says. “The FDA is now pushing for these studies to have appropriate representation, but you can imagine, given the history of medicine, a lot of people don’t want to go to [a] random doctor to participate in the research. They don’t trust it.”

Her patients do, however, trust her. “They know there’s nothing that any company could pay me to do something that’s unsafe,” she says, adding that the procedures for which she recruits participants have already passed numerous safety trials. “We’re just optimizing procedures [to] get best outcomes.” Funded by a combination of grants, product donations, and Henry’s personal funds, the work is conducted through the research arm of Henry’s business, The Henry Research Group, and designed to create a protocol for other physicians to follow. Ultimately, the goal is for people of color to be able to go to any practice and get the care that they need.

Just last year, Henry expanded her business, this time in the form of her own practice, Skin & Aesthetic Surgery of Manhattan, which is where we’re meeting today. “I had a vision that I wanted to create a place for my patients where I could invest in them the way I wanted to, I could provide the level of service that I wanted to provide them, and I could hold myself and staff accountable for how they were treated,” she says.

Another patient, beauty and skin care expert Felicia Walker, was drawn to Henry’s “very judicious and conscientious approach” to dermatology, as well as her ability to put people at ease. “She has this really refreshing and delightful cross-section of incredible skill, deep knowledge, and a very comforting demeanor,” Walker says. “I don’t feel like I’m being pushed products or services. I don’t feel like she’s being condescending or speaking above my head.”

The daughter of Grenadian immigrants, Henry was born and raised in the Houston suburb Missouri City, where at the time her family was one of few of Caribbean descent. Amid a childhood marked by playing with neighbors and developing a claymation hobby, Henry nurtured an early interest in medicine. “My mom’s a nurse,” she says, “and I remember being little and going through her medical books.”

A memory of attending “Bring Your Daughter To Work” day stands out in particular. “I was with the nurses, but I kept watching the doctors in their little academic huddle, and was like, ‘I want to know what's going on over there,’” she says. Soon, her mother’s colleagues had found Henry a white coat, put a stethoscope around her neck, and invited her to observe their work. “It was the greatest thing ever,” she says. “I knew I was going to be a doctor.” Shortly after, when Henry was 8, that ambition was reaffirmed when her great aunt, who lived with her family and helped raise her, died of breast cancer. “For the last six months of her life, she would sit me on her knee and we would talk about all the things,” she says. “We decided I was going to be a breast cancer specialist.”

That was the career Henry envisioned for herself while attending the University of Texas at Austin, where she studied biology and business. After graduation, she spent a gap year studying business in Italy — “it was good for a girl who’d only ever been in Texas,” she says — before returning to Houston to attend Baylor College of Medicine. There, however, it became apparent that oncology wasn’t her calling. “It was just too much emotion for me,” she says. “I would spend my time in oncology wards crying.”

Henry’s interest in dermatology emerged when she was matched with mentor Dr. Ida Orengo, M.D., who specialized in Mohs surgery. “It’s all the things that I like,” she says of the procedure, which was pioneered by the late Dr. Frederick Mohs, M.D., and involves removing cancerous skin cells layer by layer, reviewing each one while a patient is still awake, and closing the incision with minimal scarring. After completing her residency at Mount Sinai in New York, Henry trained in Mohs surgery as a procedural dermatology fellow at Harvard. “I was curing cancer, I was talking to the patient because they’re awake, and then there’s the artistic, reconstructive side of it.”

Today, Henry regularly performs the procedure. It’s one of several lines on her CV — which also includes being a clinical instructor of dermatology at Weill Cornell Medicine in New York — that makes her an anomaly. Only 3% of dermatologists are Black, and from 2011 to 2020, Black doctors accounted for just 2% of incoming Mohs fellows. This historic lack of representation has largely contributed to wide gaps in knowledge in the dermatology space when it comes to treating people of color. Case in point: It’s not uncommon for Henry’s peers to hand off patients to her because they lack the education and skill to work with dark complexions.

Then there’s the pressure to look “perfect,” especially in an age of filtered photos and rapidly-shifting aesthetic trends, thrust upon society by Instagram. Henry, however, has no problem going against the grain. “I tell patients no every day,” she says. “I have patients that ask, ‘Please, can I do my lips today?’ and I’ll say, ‘We’re going to revisit in four months.’” (Sometimes a patient will come back when advised, only for Henry to tell them they need to wait even longer.) “One patient told me she’s going to start a hashtag, #drhenrytoldmeno,” she says. The idea makes Henry laugh, though she’s not opposed to seeing the hashtag on Instagram, where she’s amassed more than 93,800 followers, including actor Nicole Ari Parker and comedian Phoebe Robinson, who turn to her for advice on everything from lip filler to acne scarring. They also seek her out for her take on the oversaturated skin care space, one rife with celebrity brands and amateur YouTube tutorials.

“Every product is not for everyone,” Henry says, “and people go on to Instagram, watch someone’s routine, and buy everything that they use. That’s silly, because you don’t have their skin.” Naming moisturizer, sunscreen, and retinol as fundamentals, she’s adamant that people don’t have to spend a lot of money on good skin care. “You don’t have to feel like all is lost if you can't spend $200 on a cream.” (Henry herself counts CeraVe Foaming Facial Cleanser, Supergoop! Unseen Sunscreen SPF 40, and Olay Regenerist Retinol24 Night Moisturizer among her favorite items.)

Though the TV segments, interviews, and name recognition were never goals, Henry considers them to be “a nice bonus,” albeit one she can’t always wrap her head around. “Sometimes I wake up and I’m like, ‘This is wild,’” she says. “The truth is, I’m really shy. I’m an introvert.” One who, when not working, enjoys meditation, going to the theater, and dining at her favorite Korean, Japanese, and French restaurants. Henry is flattered when med school students and early-career dermatologists express admiration for her public-facing career, but always advises them to prioritize becoming a great doctor over being a TV personality or influencer.

“Your patients don’t care that your Instagram is great,” she says. “They care that you’re not going to burn them while you’re filming the procedure.”