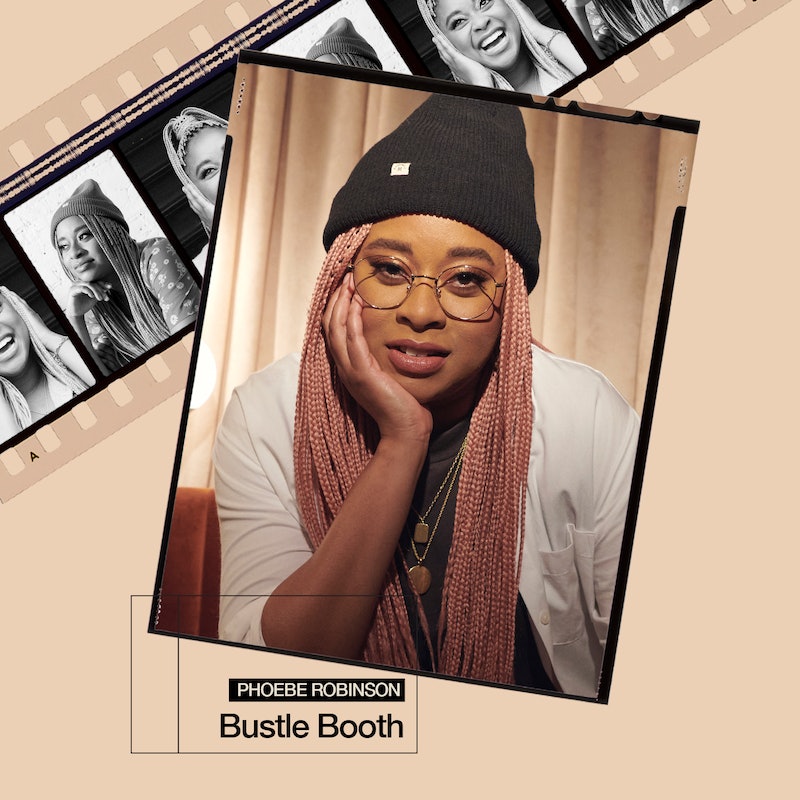 Comedian Phoebe Robinson doesn’t shy away from controversial fashion choices. Take, for instance, one of her go-to denim outfits.

From jackets to jeans, Robinson’s philosophy is the more denim you can pile on, the better. “It’s classic, it’s timeless, you can dress it up and dress it down,” she says. “You’re going to in-person meetings [in denim], but then you go to dinner and shows.”

So, it was a natural fit when Madewell tapped Robinson for its “What Are You Made Of?” campaign featuring denim skirts, jeans, and more.

Robinson is a longtime fan of the brand. In fact, back in 2015, when she and actress Jessica Williams first started recording their acclaimed 2 Dope Queens podcast, she would take a train to the city, and her stop was right next to a Madewell store.

“I walked past Madewell, and I was very, very broke,” Robinson says. “So, I would save my money and [think] ‘I’m going to get these overalls.’ Like even if I didn’t have enough money, I would just walk in and pretend like I was going to buy something.”

Robinson jokes that she’d tell the staff she’d “see them next week.”

“And they would be like, ‘This bitch,’” she says, laughing. “I eventually got to a point where I was financially secure and able to live out my Madewell dreams. So, when this opportunity came along, and they approached me, I was so excited.”

Get to know Robinson — from what she hopes people say about her to the TV show she can’t get enough of — in the Bustle Booth Q&A below.

I don’t drink coffee because I think coffee is disgusting. I like a nice green tea with honey. It’s very, very basic.

OK, I’m going to cheat because I have several. I hope that’s OK. I used to love Bobby’s World, which was a deep cut. I loved Animaniacs and then anything Looney Tunes. Even now, if there’s Looney Tunes on, I’ll stop for a second and see what’s up.

I’m currently re-watching Friends. I was into it as a kid and I’m still obsessed with it. Everyone is like, “Ross or Rachel,” and I’m like, “It’s truly about Chandler and Monica.” They’re the best couple. Chandler is so hot.

I don’t want to say “idol” but a celeb I’m inspired by [is] Solange. Just because she so early [on] figured out what her voice was. And I really like that we got to see that process in real time where she was doing like, R&B, doo whop stuff, and really was trying to figure out her voice.

So often, people forget that’s how you get to the good stuff. You figure out what works and what doesn’t work, what aligns with what you’re hearing and what doesn’t. Stuff like A Seat at the Table — it’s just so rich because she so thoroughly knows who she is. I’m really inspired by that journey.

Before I met my boyfriend and I was single after a long-term relationship ended, I was like, “I want to be the Bachelorette.” I would very much be the nontraditional Bachelorette. Where they’re all like, “I eat hot dogs and ice cream and I’m a size 2.” I’m like, “You don’t. You 100% do not.”

If I was on The Bachelor, I would never wear Spanx. So everyone could tell at what point of the day I ate because I would have a food baby.

I don’t know? Peloton? [laughs] A lot of my buddies are stand-up comedians. Every one of us has gotten to the place in our careers where we’re touring. We’re either recording albums and taping specials. It’s really so cool that like 13 years ago, we were doing stand-up for, like, chicken wings. We were losing money because of travel to and fro, and having to stay somewhere.

It’s really inspiring that we all stuck with it, even in moments of indecision. When our belief in ourselves wavered, we still were like, “We don’t want to give up.” And it worked out. Now we’re all having careers and able to pay our bills because of comedy.

I know that sounds a little basic to just be like, “The fact that we can make a living,” but it really is so hard to make it in this industry. When people do it and they’re a good person on top of that, it’s like, that’s so fucking cool.

A hard worker, but eventually learned how to enjoy life.