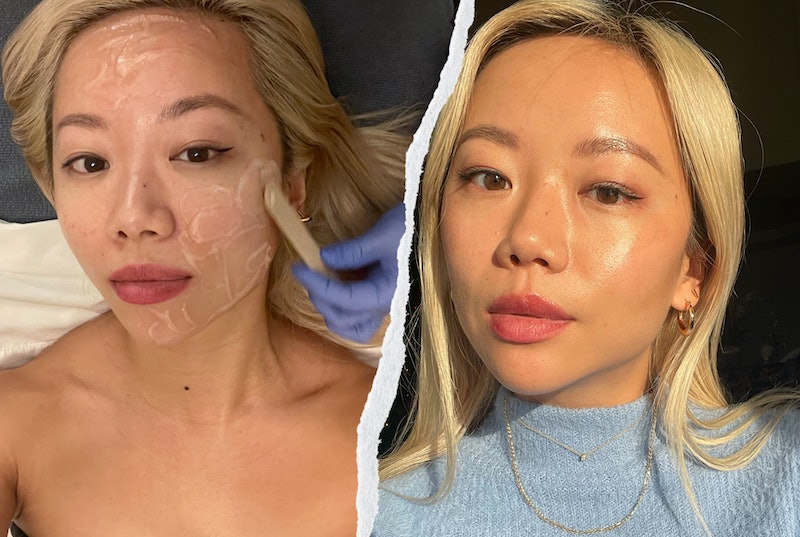 I’ve done many outlandish things in the name of beauty — foraged for mushrooms in sub-zero temps in Finland, donned 26-inch platinum K-pop star extensions, strapped myself to a device that sent thousands of electromagnetic currents deep into my stomach… the list goes on. Therefore, flying 2,789 miles across the country to blast my face with a laser seemed like a completely reasonable thing to do, and right up my alley. Which is how I found myself, one sunny Los Angeles afternoon, horizontal and covered in numbing cream in renowned esthetician Kate Somerville’s airy clinic on Melrose Place. Kate had invited me in to experience the Moxi Laser — a not-quite-new, but definitely under-the-radar laser she offers in her clinic that she tried on herself recently and was blown away by. I was promised a brightened, “rejuvenated” complexion and little-to-no pain, all in under an hour. How could I say no? How could I deny my skin — freckled, with texture issues, and starting to bear some fine lines — this opportunity to optimize its appearance, to turn back time? (I’m 31 — yes, I’ll dial back the dramatics.) I’m writing this a few weeks later and I can firmly say — the Moxi Laser is worth it. To find out more about what the Moxi Laser is, what it entails, and what my experience was like, keep reading.

What Is Moxi Laser?

Moxi is a cute name for a laser. If I could name a laser, I’d name it Moxi — it sounds friendly and approachable, which is exactly what this treatment is. Moxi is a non-ablative laser, meaning you won’t have to take a week off work afterwards because your skin is tomato red à la Samantha Jones in SATC (miss you, girl). Instead, the Moxi laser is gentle enough so that you can pretty much go about your day afterwards — you’ll experience some roughness (more on that later), but overall, with numbing cream, it should be fairly painless from start to finish.

But what is the Moxi laser and how does it work, you ask? According to Kate Somerville clinic nurse practitioner Monica Jáuregui, it’s a beginner-level laser that specifically targets pigmentation issues by creating micro-injuries to the top layer of your skin, which in turn stimulates your skin’s natural repair process.

The main benefits of Moxi are a brighter, more renewed-looking skin appearance and pigment reduction. The laser stimulates collagen and speeds up cell turnover, so your skin looks smoother and more refreshed too. It’s a great entry-level laser because it doesn’t require as much downtime and isn’t as intense as other lasers, like Fraxel. But the thing that really sets the Moxi apart from other lasers is the fact that it’s suitable for all skin tones. Dermatologists oftentimes avoid using lasers on anyone with a deeper skin tone because they can cause scarring or pigmentation. “People with a skin tone darker than a 4, 5, and 6 on the Fitzpatrick scale can benefit from the Moxi laser,” Jáuregui says. “In the past, [those with darker skin tones] had no options other than peels or even bleaching creams [for hyperpigmentation] — now, we have a laser that’s safe for all skin tones.” Another benefit of Moxi is its ability to specifically help lighten melasma, a skin darkening condition that commonly occurs due to hormone changes, like during pregnancy.

How To Prepare For Moxi Laser

There isn’t much you have to do to prepare for the Moxi, which is another reason it’s a great option for anyone who leads a busy lifestyle. I made my appointment a few weeks in advance, and showed up to the Kate Somerville clinic with a makeup-free face, ready to blast my wrinkles and dark spots away.

What To Expect During The Moxi Laser

The actual Moxi laser application was quick and easy, but you’ll have to factor in at least 30 minutes for numbing cream to set in. Monica applied a prescription numbing cream made with a concoction of lidocaine, tetracaine, and other numbing agents to my face, then let it set in for 45 minutes. (If you’re allergic to any of those ingredients, she says the clinic can compound something special for you). Fun fact: Numbing cream doesn’t really work on me. I’ve received it many times in different doctors' offices, whether it was for micro-needling or Botox or microblading my eyebrows. Each time, it slightly lessened the pain all of these procedures cause, but in general, I can still feel every prick, burn, and cut much more than the average person. It’s an unfortunate fact I’ve just had to live with.

For most people who have normal skin that numbing cream actually works on, the Moxi laser shouldn’t feel painful whatsoever. Because my skin doesn’t respond to numbing cream, the laser started feeling quite spicy after just a few passes. Monica used the handheld laser device and did roughly six passes over different parts of my face, focusing on the parts of my face where I had the most pigment, like my cheeks. She explained that there are different levels you can go up to on the Moxi, so you can opt for a more mild level (and therefore less pain and downtime), or go higher — your practitioner should customize it based on your skin tone, concerns, and pain tolerance. I’m someone who always wants maximum results, but we had to stick to level three or four so I could handle it (again, only because my skin is weird and doesn’t respond to numbing cream). She placed a cool cloth on my face between passes to keep my skin temperature down, and also used the machine on my neck and chest. To finish, she slathered Kate Somerville’s Delikate Recovery Cream and Daily Deflector Mineral SPF 40 on my face, then sent me on my way. The whole process took about an hour and a half out of my day, and though my skin felt a little warm and sensitive when I left the clinic, I didn’t look excessively red and was able to go to dinner that night without wondering if I was scaring people with my appearance.

After getting the laser, it’s important to avoid any harsh ingredients like acid or sulfates. “You want to treat your skin like a baby,” Jáuregui says. She recommends using repairing serums with growth factors, which are often used for wound healing, to help repair the skin after the Moxi laser. After that, lock things in with a gentle moisturizer, (I swear by Kate Somerville’s Delikate Recovery Cream because it’s so soothing and gentle), then always make sure to wear SPF 30 and above in the morning, reapplying throughout the day. My skin felt a little rough after the laser, but it wasn’t until the third day that I could feel the tiny scabs forming on my skin, which Monica promised me would fall off my skin by day five (they did). Once that happens, you can start incorporating gentle retinol and acids back into your skin care routine. It takes four to six weeks — about a month — to see full results from the Moxi laser, because that’s how long it takes for skin cell turnover.

First of all, the experience of watching the pigment literally come to the surface of your skin then scab over and flake off is sickeningly fascinating. I was obsessed and checked my skin multiple times a day in the mirror, marveling at the little brown specs on my skin — it looked like I had just spent an hour dancing in the dust fields at Coachella. But to anyone standing more than six inches away from me (aka most people, I hope), the little specks were entirely unnoticeable. I was able to wear makeup whenever I wanted a bit more coverage, but for the most part, I tried to let my skin breathe.

After four weeks, I noticed my skin looked brighter and smoother — and more importantly, many of the freckles and dark spots on my cheeks had lightened or disappeared completely. I was completely shocked. I also started getting compliments on my skin from strangers around this time, which really sealed it for me. I couldn’t believe that I received such noticeable results from a laser that required no downtime. My skin tone looked brighter and more even, and I started using way less face makeup — just a primer and a few dabs of concealer, if that, on most days.

Most lasers don’t come cheap, but one treatment of the Moxi laser is on the lower end of the cost spectrum, at $625 per session. You’ll see results after just one treatment, but the clinic recommends getting up to three sessions spaced four to six weeks apart to see maximum results, especially if you have areas with extreme hyperpigmentation.

I’m so impressed with my results from the Moxi laser. It’s a great option if you’re new to lasers and want something that you can squeeze in during your lunch break. It’s also one of the few laser options out there that’s suitable for all skin tones, so if you have a deeper skin tone and want to lighten melasma or just boost your skin’s collagen levels, try the Moxi — then just wait for the compliments to roll in.