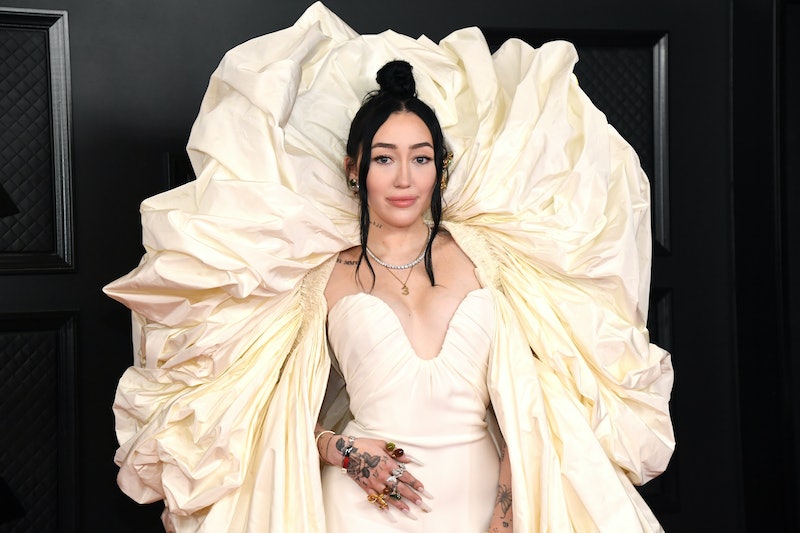 Noah Cyrus’ Grammys 2021 dress is one of the most memorable looks of the night, if you let Twitter tell it. As soon as the “All Three” singer stepped on camera, people started buzzing about her Schiaparelli look which features a strapless, column gown with a plunging neckline, and a voluminous back that opens up behind her like a fan.

The younger Cyrus sibling complemented the bold gown with a simple hairstyle: a top knot with two strands of hair framing her face. She piled on the chunky rings, a trend also embraced by Harry Styles, and finished her look with gold earrings as well as a pearl and pendant necklace. On her feet, she wore bright gold platform shoes.

Cyrus is nominated for Best New Artist alongside Megan Thee Stallion and Doja Cat. The moment is extra special for Noah as it falls exactly 28 years after her father Billy Ray Cyrus was nominated in the same category.

Whether or not Cyrus takes home the honor, she still made quite a statement in her unconventional couture look — and commanded plenty of attention in the process. Immediately, fans began comparing her outfit to everything from tissue paper and pillows to bed sheets and duvet covers.

Some even went so far as compare her to whipped cream frosting. As spirited as the responses were, there’s one reaction that likely meant the most to Cyrus: her father’s. Billy Ray Cyrus is quoted as saying she looks “like an angel.”

Noah Cyrus Is All Of Us After Daylight Savings

A Boxed Doll But Keep The Tissue Paper

Words To Live By

Why Even Get Dressed When You Can Turn Your Comforter Into A Gown?

From The Bed To The Runway To The Red Carpet

From The House Of Meringue

When You Want To Carry Your Pillow With You Everywhere

Maybe She Was Planning On Napping During Commercials?

That’s Where All The Toilet Paper Went

Sorry To That Person

Now That’s How To Slay A Red Carpet

But In The Most Stylish Way Possible

Popcorn Is Officially In Style