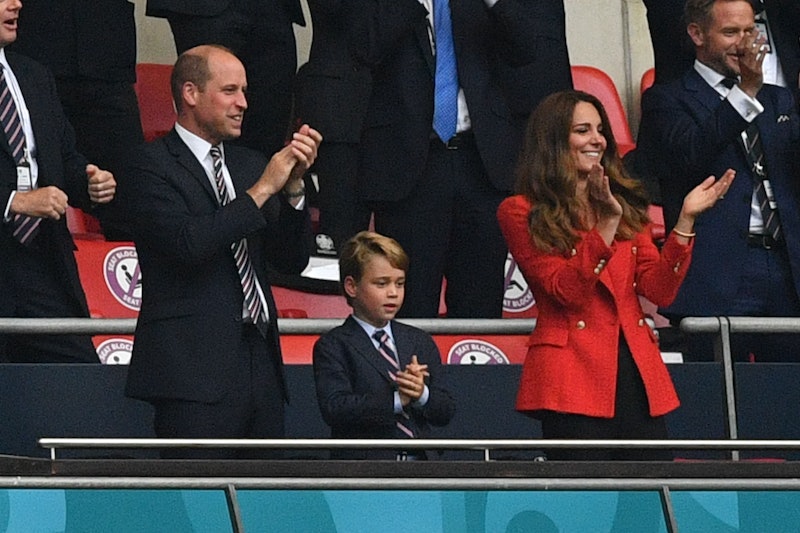 The Cambridges appearance at Wembley Stadium to cheer on England was a pleasant surprise, and even more so was seeing how grown-up Prince George looked in his suit and tie. The outfit was very different to the shorts and shirts the world is used to seeing him in, and this transition is actually a result of a particular dress code that young British princes have followed for centuries.

This piece of royal protocol dates back to the 16th century, etiquette expert Grant Harrold explained to BBC News. Young boys would wear gowns or dresses until the age of eight when they would start wearing breeches. This transition has come to be known as “breeching”, which in the Victorian era would signify a “boy’s step towards manhood.”

This transition began to shift by the 19th century as the “dress tradition had died out”, and was eventually replaced with shorts. “It’s a very English thing to dress a young boy in shorts,” etiquette expert William Hanson told Harper’s Bazaar. “Trousers are for older boys and men, whereas shorts on young boys is one of those silent class markers we have in England.”

You can even see this change in tradition through George’s father and grandfather. It seems that Queen Elizabeth followed the dress protocol when Prince Charles was young, as there is a photograph of him wearing an infant dress prior to his first birthday. As he grew older, he transitioned from dresses to shorts, and eventually trousers.

By contrast, the only time that Prince William was photographed in a dress was his christening gown. From there, the young prince was seen in shorts before wearing trousers for the first time at a wedding he attended with his mother, Princess Diana.

George also wore a gown for his christening in 2013, designed by Janet Sutherland as a replica of the original 1841 christening gown. From there, he transitioned to wearing shorts and rompers before wearing his first set of trousers at the wedding of Prince Harry & Meghan Markle, wearing a miniature version of the Blues and Royal frock coat and trousers.

Prince Louis on the other hand has not had to stick to the tradition and has been able to wear trousers on the red carpet at the panto with his family, and in the official Christmas card photograph released by the Duke and Duchess of Cambridge.