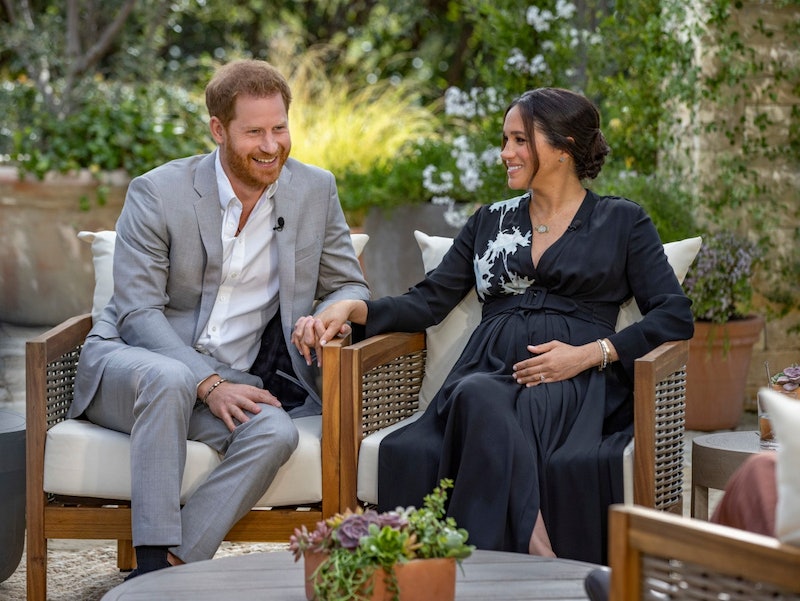 The world was glued to the screen on Sunday night as Prince Harry and Meghan Markle sat down with Oprah for their much-anticipated two-hour interview special. They opened up about their experience as working members of the Royal family and what inspired them to ultimately step back from their roles. While they were certainly many memorable quotes, their wardrobe spoke volumes as well. And Prince Harry's Oprah interview suit had a hidden meaning that will melt your heart.

Much has been said about Meghan Markle’s Armani wrap dress and Princess Diana’s Cartier bracelet at the interview, but it’s likely you don’t know that there’s also a significance behind Prince Harry's suit. Joining Markle and Oprah about halfway through the interview, he looked casual and tailored in a light gray suit with a white button-down underneath. The suit was actually a J.Crew find — the all-popular Ludlow — which retails for $650. This wasn’t the first time that Harry was seen in the suit, however.

Perhaps the most notable appearance of the aforementioned look was for the couple’s first official photos after Markle gave birth to their son Archie in May of 2019. He wore it shortly thereafter for Archie’s christening in July of that same year. As such, wearing the same suit for such a poignant interview gave a slight nod to his son and the monumental occasions in Archie's life that have come before.

During their Oprah interview, Archie was a reoccurring topic, as his parents revealed that while their son was in utero, a member of the royal family expressed concern about how dark his complexion might be. They also alleged that the firm opted out of giving Archie a royal title and providing security for him. These claims made Prince Harry's fashion nod toward Archie — and his commitment to protecting and nurturing him — all the more powerful.