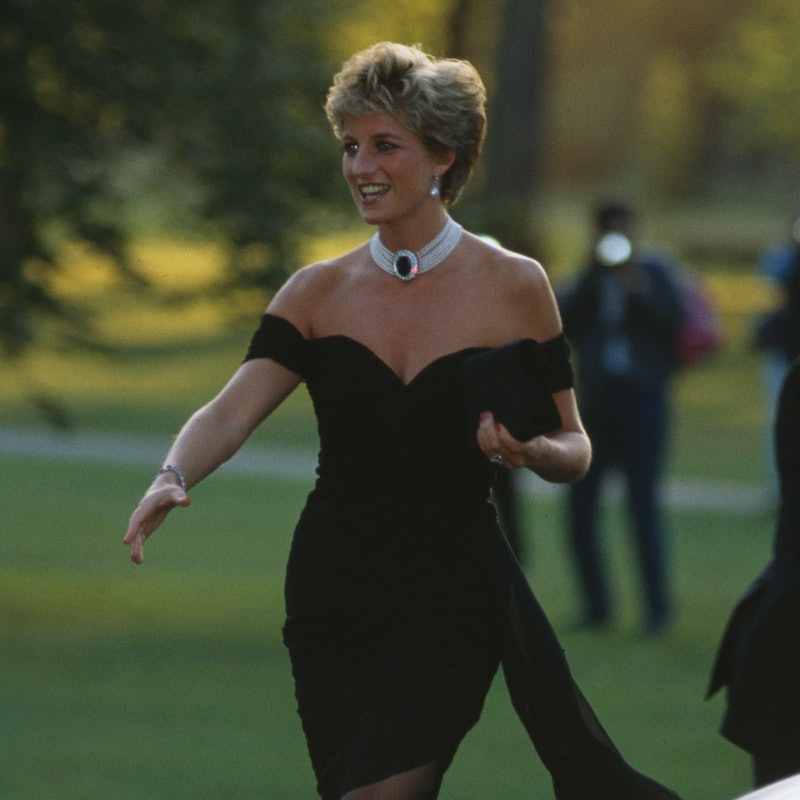 Princess Diana's revenge dress made its public debut in June 1994. The garment featured a mini silhouette and an off-the-shoulder, sweetheart neckline. She paired it with a pair of classic black pumps and a seven-strand pearl choker with a large sapphire and diamond brooch, a gift from the Queen Mother.

Princess Diana's revenge dress is one of the most famous fashion items in history for several reasons. First, at the exact moment Princess Diana was being photographed in this iconic little black dress, her then-husband, Prince Charles, was confessing on national television that he had been unfaithful in their marriage. Though most in that situation would have hunkered down and canceled all public appearances, Diana leaned into the moment, stepping out in the ultimate "revenge look." The dress sent a few hidden messages that not only rebelled against royal style standards, but delivered a very personal dig at Prince Charles.

The dress broke one of the monarchy's major fashion rules. The off-shoulder neckline is typically not encouraged at royal appearances. The dress was also more provocative than the royal family is used to. The mini silhouette isn't something we see often from representatives of the monarchy who opt for long or midi silhouettes.

Princess Diana was well aware of these sartorial stipulations, and, perhaps, was sending a rebellious message to the monarchy by wearing a look that pushed the envelope. According to Princess Diana's stylist, Anna Harvey, the princess knew it was a daring choice and the dress had previously remained unworn for that very reason, though she had purchased it three years prior. That night, however, “she wanted to look like a million dollars.”

Even the color of the dress had personal significance for Princess Diana and Prince Charles' marriage. The Crown costume designer Amy Roberts revealed that the black hue was a dig at the princess's then-husband. “It was absolute defiance," Roberts tells Bustle. "Because [the royal family doesn’t] like you to wear black — Charles never liked Diana to wear black.” Roberts chose a black dress for the final scene in Season 4 of The Crown to speak to that attitude of defiance during Princess Diana's last days as a royal.

Read on for more details about Princess Diana's revenge dress and how it inspired Emma Corrin's Season 4 look on The Crown.

Where Did Princess Diana Wear The Revenge Dress?

She wore it to the Vanity Fair annual fundraising gala at the Serpentine Gallery in London. Rumor has it that Princess Diana actually planned to wear a Valentino dress for the event, but switched dresses when the first look was leaked to the media beforehand via a press release from the design house.

How Much Did Princess Diana's Revenge Dress Cost?

There's no reported information about the original cost of the dress. Princess Diana bought it off-the-rack, and the brand is no longer in business, so it's unclear what its designs typically retail for. While there's no knowledge about how much the piece initially retailed for, the dress Princess Diana wore was eventually auctioned off in June of 1997 for a whopping $65,000.

Who Made Princess Diana's Revenge Dress?

It was designed by Christina Stambolian. She is a Greek designer who came to London to work in 1970 and presented her first collection in 1978. Though this dress was so iconic of Diana's repertoire, it was the only known look by this designer to have been worn by the late princess.

It is not. Princess Diana's revenge dress was put up for auction in June 1997 during a showing at Christie’s with the princess’s 79 most iconic pieces, put on just months before her untimely and tragic death. The event raised $3.25 million for The Royal Marsden Hospital Cancer Fund and the AIDS Crisis Trust.

Is There A Princess Diana Revenge Dress Replica?

Though the designer herself is no longer selling her creations, much less the exact dress that Diana wore, there are plenty of similar replicas that you can buy today. For the holiday season and beyond, see some of the best Princess Diana revenge dresses below.

Not exactly. The Crown costume designer Amy Roberts crafted a similar look for a family photograph in the Season 4 finale episode. Though not specifically at the Vanity Fair event, there was no doubt that the little black dress actress Emma Corrin wore was meant to evoke images of Princess Diana’s revenge dress.

Of that iconic look, Roberts told Bustle that even the color sent an antagonizing message. “I think it was absolute defiance. Because [the Royal Family doesn’t] like you to wear black — Charles never liked Diana to wear black.”

That sense of rebellion was also present in the last scene of The Crown when (spoilers ahead) Princess Diana is depicted frowning in a family photo, after a heated discussion with Prince Phillip about the prospect of her separating from the royals. "It was such an important, powerful scene," says Roberts. "A fight or flight moment. And she’s going to fight."

Roberts was intentional about juxtaposing Princess Diana's black dress in The Crown Season 4 finale with the playful costume she wears when she first appears in the series. “When you think of the first time that we see Diana — when we very first look at her dressed as this crazy little fairy, all covered in leaves — and the last time you see her, it couldn’t be more different. I like the idea of the beginning of her journey and the end of her journey [being] quite different.”

What Happened To Princess Diana's Choker Necklace Worn With Her Revenge Dress?

The necklace was an interesting and intentional pairing as it was crafted from Princess Diana’s wedding gift from the Queen Mother more than a decade before. The brooch featured a large Sri Lankan sapphire surrounded by diamonds.

Though Princess Diana wore it traditionally as a brooch during the Dutch State Visit in 1982, it was quickly converted into that iconic pearl choker sometime before 1985, when she wore it to the White House and turned heads during her famous dance with John Travolta.

She continued to wear the choker fairly regularly after that, and it was last seen at the Met Gala in New York City in 1996. It is now in her archives, belonging to her sons, Princes William and Harry.