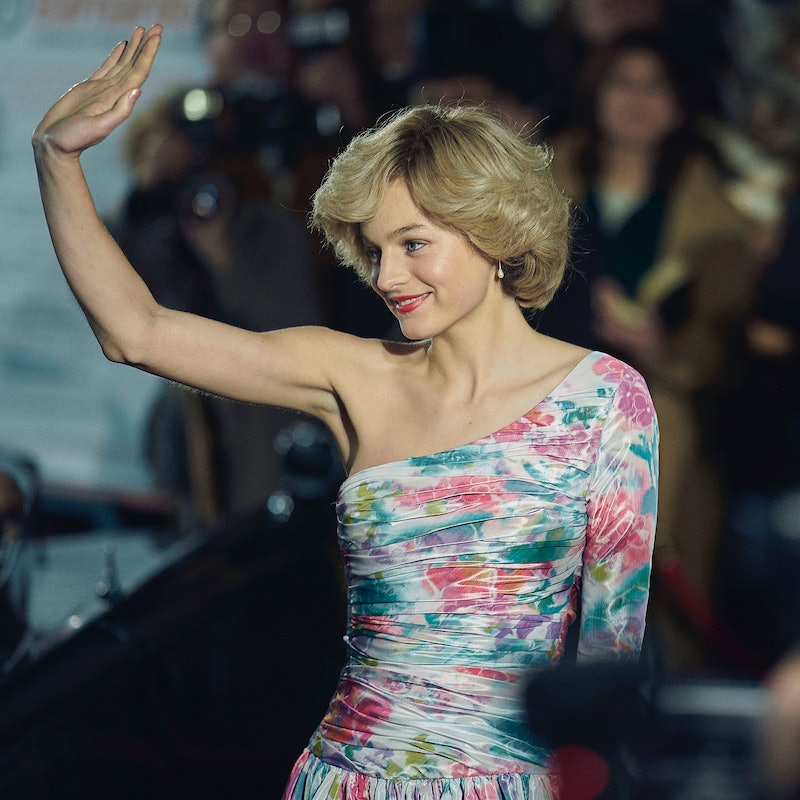 Princess Diana's style on The Crown changes drastically during the fourth season of the hit Netflix show. While it starts out demure and understated, the Princess, played by Emma Corrin, gradually steps into her status as an enduring fashion icon as the show progresses.

Costume designer Amy Roberts manufactured this evolution by carefully choosing clothing that documents Princess Diana's changing taste. Her goal? Making her outfits mimic her personal struggle to adapt to royal life. "This season is really taking a journey with this young teenager," Roberts tells Bustle. "She’s 18, 19. She’s shy, she’s not particularly fashion-conscious, and it’s [about] taking that girl on this momentous journey.”

The Crown’s fourth season centers largely on Princess Diana’s entrance into the Royal family as well as the public eye. Roberts found her induction into the British monarchy to be quite abrupt, so she used fashion to capture that shift. "When she meets the handsome prince, she’s engaged, and then she’s kind of whisked away to the palace and that’s it really. I never feel she’s quite got her style.”

As Princess Diana moves from sweater vests to her wedding gown and ultimately her revenge dress, her personal style dramatically evolves before the viewers' eyes. “When you think of the first time that we see Diana — when we very first look at her dressed as this crazy little fairy, all covered in leaves — and the last time you see her, it couldn’t be more different," Roberts explains. "So, I like the idea of [juxtaposing] the beginning of her journey and the end of her journey.”

Her earlier outfits add drama to awkward scenes, like when Princess Diana is introduced to the women of the Royal family, including Queen Elizabeth II and Princess Margaret. Diana is asked to greet each of them in proper order and with correct decorum, and the tension is so thick the viewer feels as if they're being judged and mocked alongside her. Roberts chose a puff-sleeve party dress for that moment to emphasize Princess Diana's naiveté and discomfort. "When she first goes to the palace and meets all those scary women, and when she meets Margaret, she just looks awkward and like a little girl.”

As royal fans know, Princess Diana eventually found her sartorial footing around the same time her marriage began to dissolve. “As her story progresses and sadly the marriage becomes more and more problematic, she realized her power with her attractiveness and how people warm to her,” Roberts explains.

With her split from Prince Charles all but inevitable, Princess Diana began to weaponize her fashion choices against the rigid demands of royal protocol. She's well known for breaking the British monarchy's style rules, long before Meghan Markle and Kate Middleton followed in her footsteps. Princess Diana's off-the-shoulder dresses and mini silhouettes, for example, were forbidden according to royal dressing guidelines.

By the end of Season 4, Princess Diana's style foreshadows how she will further break from the royal family — and their fashion rules — in the next season of The Crown. "Her style at the end points a bit more to the Diana that I think people remember particularly and expect. It’s just a nod into where she’ll be going in season 5.”

More like this
15 Of Carrie Bradshaw’s Best Handbags From Sex & The City
By Dominique Norman
'Emily In Paris' Lucien Laviscount & Lucas Bravo Owned Paris Fashion Week
By El Hunt
Kendall Jenner’s Colored Tights Prove That Cheugy Can Be Chic
By Alyssa Lapid
Kylie Jenner Wore Platform UGG Boots, Kendall's Favorite Cheugy Trend
By Alyssa Lapid
Get Even More From Bustle — Sign Up For The Newsletter
From hair trends to relationship advice, our daily newsletter has everything you need to sound like a person who’s on TikTok, even if you aren’t.