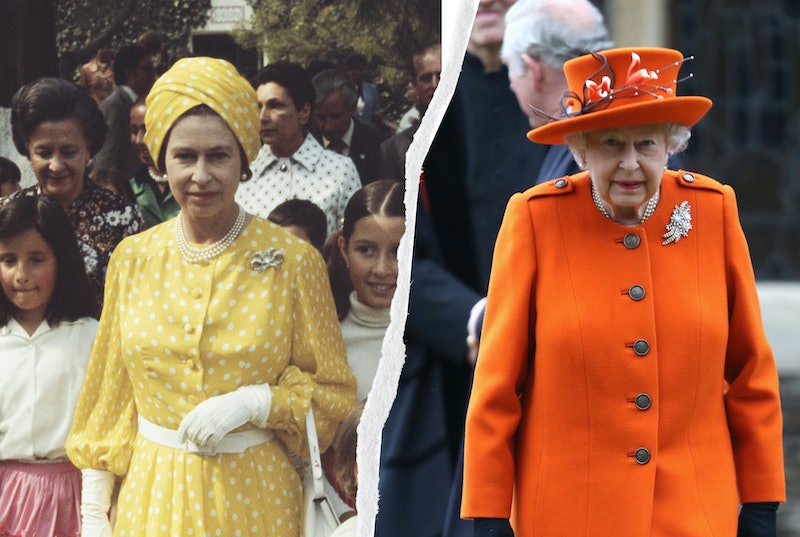 Queen Elizabeth II just celebrated her 95th birthday. Born into the Royal Family, she, herself, has held the seat at the head since 1953. That’s nearly 70 years in power. And almost seven decades of public events. She’s been known to stick to the Royal dress code to-a-T. What that means, on most occasions, is a pair of tights, low-heeled pumps, a mid-length dress, and a matching hat.

Though the Queen sometimes wears prints, it is the solid bold colors for which she is best known. Often matching her dress, coat, and hat, to splice together her looks over even a week’s time is to create a stunning rainbow.

When it comes to jewelry, Queen Elizabeth II keeps it simple. She is known for her brooches (many of which contain a hidden meaning or important story), and largely sticks to pearls by day and gems by night when it comes to her bracelet, necklace, and earring combination. And, of course, for special occasions the tiaras are everything.

Over the years, though she’s more often opted for long sleeves over off-the-shoulder gowns, lowered her heel height, and incorporated more of her signature hats into her everyday looks, her style has remained largely unchanged. In short, the Queen is just as much of a style icon today as she ever was.

From her adolescence to today, here are Queen Elizabeth II’s best looks, in color.