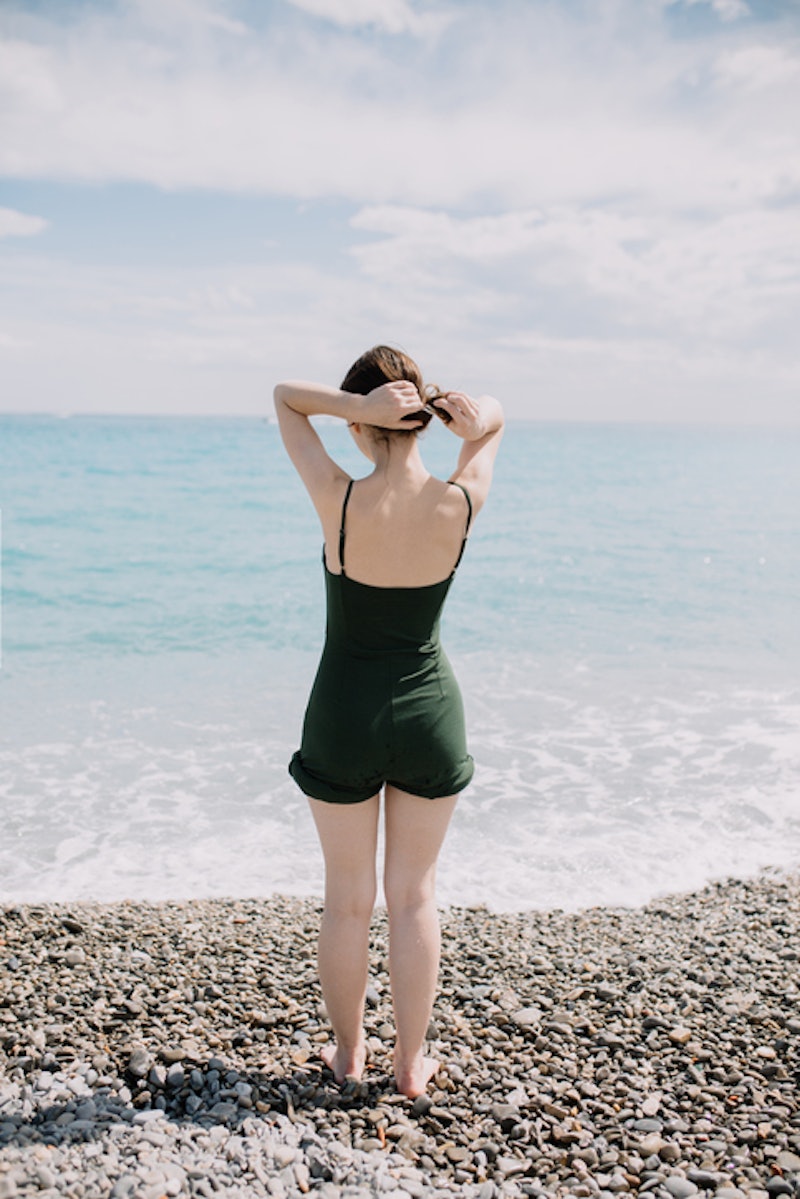 Cellulite is a totally mystifying thing that happens to the female body (90% of female bodies on the planet, to be more exact) — mystifying because it has nothing to do with how “healthy” you are. It’s simply how your body is structured beneath the surface. Though it’s not at all a health concern, lots of products and treatments exist to help those who want to diminish the appearance of their dimples. As someone who’s tried a big chunk of the solutions out there, I was particularly intrigued by QWO, the latest of the bunch.

The QWO cellulite treatment is the first FDA-approved injectable designed to smooth dimpling. It’s groundbreaking because, well, there hasn’t been anything like it before: It works to get rid of cellulite at its source, rather than through massage, radiofrequency, or — the norm — topical products. Instead, it specifically targets the connective bands, called fibrous septae, underneath the skin’s surface. (When you have cellulite, these bands are extra stiff, which cause tension as fat cells push against the skin and create a ripple effect.)

QWO’s attracted a lot of buzz since it officially launched in dermatologist and cosmetic treatment offices across the country in March, so I was curious to try it for myself. Here’s what I learned, and how it all went.

What Is The QWO Cellulite Treatment?

The magic of QWO is that it is an enzyme that dissolves the fibrous bands that create cellulite. “It’s made from enzymes called collagenases, and these are thought to target the structural causes underneath the skin where cellulite starts,” says Grace Battaglia, director of commercial development at Endo Aesthetics, QWO’s manufacturer. The enzymes do three things: release the fibrous bands, create more room for the fat cells to redistribute, and stimulate new collagen growth.

QWO’s efficacy was tested on 843 patients in the largest cellulite study ever done in the U.S. To ensure it worked for a variety of women, the trials were conducted on those aged 18 to 78 with different skin types and ethnicities and were found to be safe for everyone.

Not everyone’s a candidate for the treatment, however. According to Dr. Melissa Levin, M.D., a New York-based board-certified dermatologist and founder of Entiere Dermatology, you should have moderate to severe cellulite, as determined by your derm — rather than light rippling or skin laxity — for it to be effective. And, though QWO has so far only gotten FDA approval for treating dimpling in the butt area, you can also ask your dermatologist about getting it on your legs, which is what I did.

When you get QWO, your appointment will be relatively quick, usually about 10 to 15 minutes, and you’ll need three treatments, each spaced about three weeks apart. Cost-wise, each session ranges from $695 to $995 depending on the number of areas you get treated and where in the country you get it done.

A couple of months ago, I walked into Juva Skin & Laser Center in NYC to meet with Dr. Bruce E. Katz, M.D., a board-certified dermatologist who actually helped conduct the FDA trials on patients for the treatment. To ensure I was an ideal candidate for QWO, I changed into a smock and Katz examined my areas of concern — the sides and fronts of my thighs — and circled the dimples he would inject.

From there, I laid down on the treatment table as Katz went in with the QWO-filled syringe. You don’t need numbing cream for the injections, although it’s an option if you’re really sensitive to pain. I went without it — Katz said the needle is tiny and you “hardly feel it.” This was mostly true: I felt just a tiny pinch, similar to Botox, in most areas where he injected me. The area just above my knees, however, was pretty painful, and Katz told me it’s because the skin is thinner in that area. Thankfully, it was over after a few minutes.

When I stood up, I was taken aback by how sore my legs felt — it was as though I had just done an extra hard lower-body workout. Katz says you’ll likely experience the most side effects, including mild pain and soreness, swelling, and localized bruising, after the first QWO session. They should diminish with each treatment.

The pain in my legs made it difficult to sit down and stand up, which made going down the subway stairs after my first treatment quite a challenge. I felt mobile again after about two days of half-limping and lots of rest. But the bruising was very much there: In all the injection sites, I developed swaths of super-dark spots where I was treated. Eleven weeks later, they’ve just about fully faded.

How Does QWO Compare To Other Cellulite Treatments?

In the cellulite treatment realm, the other highly effective in-office option is Cellfina, which has been around and FDA approved since 2015. This is a more invasive procedure that uses a device that sticks needles into the skin to physically break up the fibrous bands, according to Levin. “It causes a lot of trauma, it’s not as targeted, and there’s a lot of downtime for the patient,” she tells Bustle.

The other major cellulite treatment on the market is Cellulaze, an FDA-approved laser-based surgical procedure that requires local anesthesia and works to cut the fibrous bands and stimulate collagen. Still, both Katz and Levin point out that QWO is the first of its kind — an injection that you’re able to get on your lunch break much like you would with Botox or filler.

Besides those, massage and radiofrequency-based treatments — like EmTone and Velashape, for instance — stimulate collagen with a combo of physical manipulation of the skin and heat. “They try to radically loosen things up without breaking the bands, so they don’t address the root cause,” says Levin. These methods also don’t last that long and typically require four to six treatments once or twice a year to maintain results. (FWIW, I’ve gotten four sessions of Velashape in the past and only saw a minor improvement in my cellulite... but the dimples returned to normal after a couple of months.)

How Long Does QWO Last?

Aside from the results, QWO is noteworthy because it’s long-lasting. “We checked the patients we did the QWO on two and a half years ago in the FDA trials, and none of the women had their cellulite come back,” Katz says. That’s a big difference compared to other treatments on the market.

After Katz gave me my first round of injections, I was told I should start to see an improvement after the second treatment but possibly not until the third — and that I definitely wouldn’t see final results until roughly six months after that.

That’s why I was shocked when I got out of bed one morning a week and a half after my first round of injections and saw visibly smoother legs. After my second session, I braced myself for a slow and painful schlep home but was pleasantly surprised to feel much less soreness than the first time around. I was also prepared for dark bruises (having stocked up on a handful of bruise-diminishing creams) but woke up the next morning to find not-quite-as-intense splotches.

When I went for my third and final treatment three weeks later, my practitioner had a hard time finding dimples to inject — my legs had become that much smoother. The side effects were dramatically reduced, too: I felt zero pain after the injections and didn’t experience any new bruising.

It’s been 11 weeks since my first QWO session, and I’m in awe of the results: My cellulite is about 95% gone. Cellulite is something I’ve dealt with for at least a decade, and although I’ve done my best to embrace it, I’ve always felt a little self-conscious when I slip into a swimsuit or a pair of shorts. Over the past couple of months, though, I’ve felt a surge of confidence that doesn’t prevent me from showing off my legs in public — and although it might sound superficial, getting the treatment has made a huge difference in my self-esteem. I’ve always been a cynic when it comes to cellulite treatments, but I’m happy to report that this is the real deal.

Friedmann, D. (2017). Cellulite: a review with a focus on subcision. Clinical, Cosmetic, and Investigational Dermatology. https://www.ncbi.nlm.nih.gov/pmc/articles/PMC5234561/

More like this
Fermented Skin Care's Barrier-Boosting Benefits, Explained By Derms
By Audrey Noble
Everything To Know About Daxxify, The Newest FDA-Approved Skin-Jectable
By Olivia Rose Ferreiro
15 Must-Have New Beauty Launches, According To Our Editors
By Rachel Lapidos
13 Caffeine-Infused Eye Creams, Patches, & Serums For Puffy Under Eyes
By Olivia Rose Ferreiro
Get Even More From Bustle — Sign Up For The Newsletter