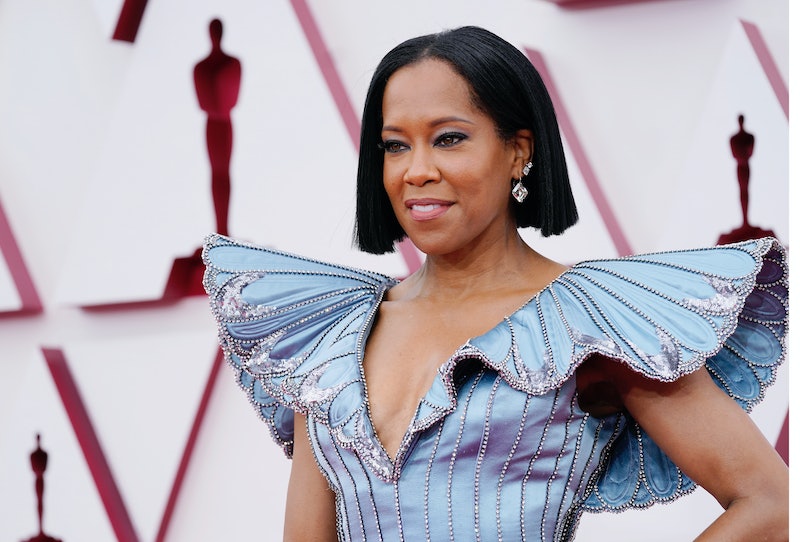 The dress code for this year’s Oscars ceremony was described as such: “Formal is totally cool if you want to go there, but casual is really not.” After nearly a year of sweatpants, A-listers seemed relieved to have a reason to get glamorous again — and the red carpet tonight was evidence of that. Between elegant golden gowns and eye-catching neon numbers, celebrities brought their a-game to the 93rd Academy Awards. No one did it better than Regina King, however.

The One Night In Miami director can do no wrong — especially on a red carpet — and King’s Oscar 2021 outfit was proof. The multihyphenate walked (nay, strutted) into Union Station to open the show in a custom, pale blue Louis Vuitton by Nicolas Ghesquière. With bedazzled pleating, a plunging neckline, and ‘80s-style shoulders, the star continues her long-running reign as the queen of red carpet glamour. And Twitter is losing their mind over her stunning gown.

King collaborated with stylist duo Wayman and Micah on her Tiffany-blue, butterfly-style look. The dress incorporated over 60,000 sequins and took 140 hours to make — no small feat for a queen. It’s no surprise that as soon as she unveiled her look on social media, and shortly after hit the red carpet alongside One Night In Miami star Aldis Hodge, the internet erupted in praise.

Read on for more of Twitter’s reactions to King’s Oscars look.

The Popular Twitter Catchphrase Has Never Been More Apt

A Snub From The Academy, But A Win For Fashion

She Can Do No Wrong

A Queen, That’s Who

More like this
Remember When Benedict Cumberbatch Announced His Engagement In A Newspaper Ad?
By Hugh McIntyre
Kourtney Kardashian Got Married In A Heart-Stamped Mini Dress
By Allie Fasanella
Behold: The Best, Most Dramatic 2022 Met Gala Looks Of The Night
By Dominique Norman
Gabourey Sidibe Wore A Traditional West African Wedding Dress On The Cover Of Brides
By Dominique Norman
Get Even More From Bustle — Sign Up For The Newsletter