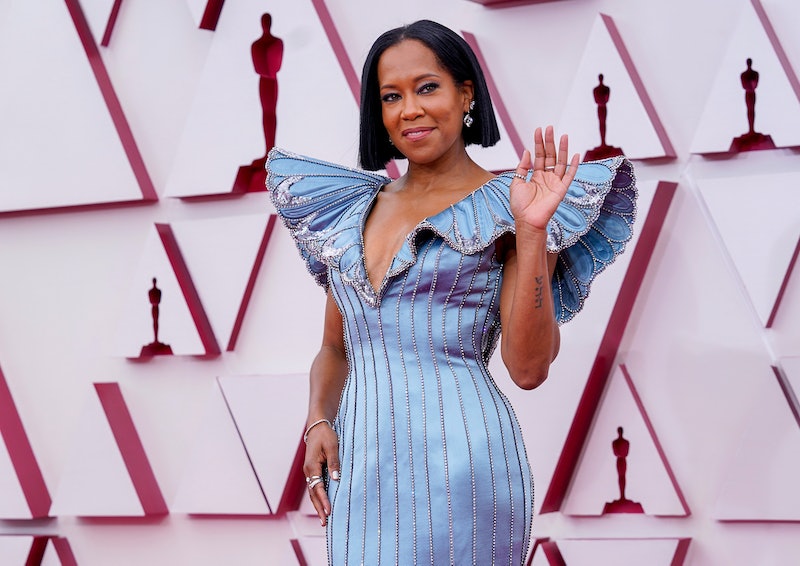 The 2021 Oscars were already off to a fashionable start with the stars’ vibrant looks on the red carpet — but Regina King’s entrance into Union Station at the opening of the 93rd Academy Awards took things up a notch. The Oscar-winning actor, who directed this year’s multi-nominated film One Night in Miami, strutted into the venue before presenting the first two awards of the evening.

Sporting a daring baby-blue dress with butterfly detailing, King picked up an Oscar statuette on her way inside. Colorful intro credits appeared onscreen as she strolled through the lobby, passing masked servers, photographers, and other attendees craning their necks for a look (relatable). Once she entered the show and took to the stage, though, King acknowledged that she had much more than style on her mind. “I have to be honest,” she said as she addressed the crowd, “if things had gone differently this past week in Minneapolis, I might have traded in my heels for marching boots.”

Fans took to Twitter to celebrate the iconic entrance, with several people noting how the concept — so well executed by King — put a playful twist on the usual award show opening.

One Twitter user was reminded of another unforgettable King moment — when she briefly tripped, and Chris Evans helped steady her at the 2019 awards.

One Night in Miami, King’s feature directorial debut, was nominated for Best Adapted Screenplay, Best Original Song, and Best Supporting Actor for Leslie Odom Jr. Many wondered why King wasn’t nominated for Best Director, an honor that ultimately went to Chloé Zhao for Nomadland at the Oscars. Fortunately for her fans, King’s already working on future projects that might garner her more awards attention — including starring in, and producing, a film about the United States’ first Black congresswoman, Shirley Chisholm.

More like this
Remember When Benedict Cumberbatch Announced His Engagement In A Newspaper Ad?
By Hugh McIntyre
Tom Cruise Gives His Honest Review Of Lady Gaga’s New Song For 'Top Gun: Maverick'
By Hugh McIntyre
Lisa Marie Presley Reviewed Baz Luhrmann’s ‘Elvis’ Movie On Twitter
By Grace Wehniainen
Elizabeth Olsen's Chris Evans Friendship Update Was Accidentally Hilarious
By Grace Wehniainen
Get Even More From Bustle — Sign Up For The Newsletter