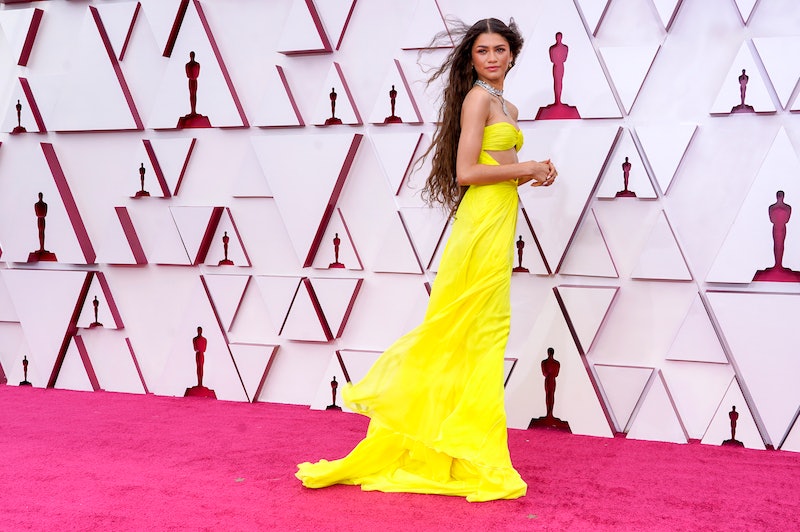 The Academy Awards are under way, and for this year’s event, celebrities were asked to dress up in formalwear, leaving the sweatpants and pajamas behind. The biggest Hollywood stars did just that, showing up in their best gowns, jumpsuits (looking at you, H.E.R.) and tuxedos for the occasion. Zendaya’s Oscars 2021 gown fit the bill, as the Malcolm & Marie actress chose a floor-length sweeping dress by Valentino in a stunning shade of neon.

The gown features ruching at the waist and an intense cutout at the midriff resembling a bra top and skirt combo. Zendaya completed her look with a matching face mask and over 183 carats of Bvlgari diamonds. What’s more, the dress glows in the dark. Zendaya’s stylist Luxury Law posted a video of the illuminated dress with the caption: “Neon dream.” Dreamy indeed.

The Valentino dress is the latest in a string of gorgeous red carpet moments from Zendaya. At Essence Black Women in Hollywood Awards, she chose a blue puff-shouldered top from YSL plucked from her stylist’s vintage collection. Law shared that it actually belonged to the late Johnson Publishing executive and famed businesswoman Eunice Johnson.

For the 2020 Emmys, when she became the youngest woman in history to win Lead Actress in a Drama Series, Zendaya chose a custom two-piece look by Armani Privé, including a silver studded bralette top and polka-dot skirt.

“We didn’t get it created knowing she would wear it to the Emmys because we didn’t know she would get a nomination, but that pattern was on that season’s runway,” Roach told Bustle at the time. “I love polka dot. There’s always something fun about polka dots for me. They sent a couple sketches with a couple different options, but the one with the polka dots really caught my eye.”

With her yellow cut-out gown, which is actually an optical illusion, Zendaya lands atop yet another best-dressed list. Scroll down to see the glow-in-the-dark color in action.