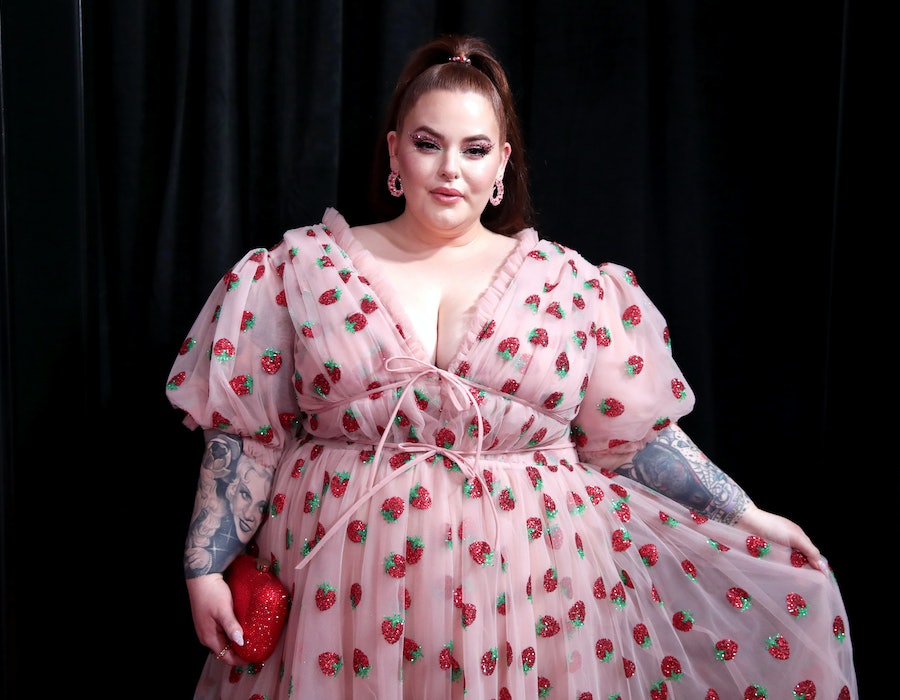 Lirika Matoshi’s Strawberry Midi Dress is the summer look that's launched a thousand viral outfit posts. Cited as “the dress of the summer," the pale pink tulle dress boasts a waist-tie, ruffle hem, and allover strawberry pattern — and can be shopped on the designer’s website for $490. But, long before it became a viral sensation this summer, Tess Holliday wore that very dress on the red carpet at the 2020 Grammy Awards. And it landed her on the worst-dressed list for the evening.

Now, Holliday is speaking out, claiming that the fact that she was criticized, while other girls are taking over Instagram in the very same look, is a form of body-shaming. On Sunday, she took to Twitter to share her feelings on the subject, writing, “I like how this dress had me on worst dressed lists when I wore it in January but now bc a bunch of skinny ppl wore it on TikTok everyone cares.” To that post, she added, “To sum it up: our society hates fat people, especially when we are winning.”

She’s since received an outpouring of support, including one Twitter user who pointed out, “Exactly!!!! Omg! That’s what pissed me off about the trend is cuz now it was noticed after a thin girl wears it it’s cute." Yet another fan tweeted, “You are the only person I can see in my head when someone brings his dress up! As far as I’m concerned, you own this look.”

Below, shop the look for yourself, and own it just like Holliday did.