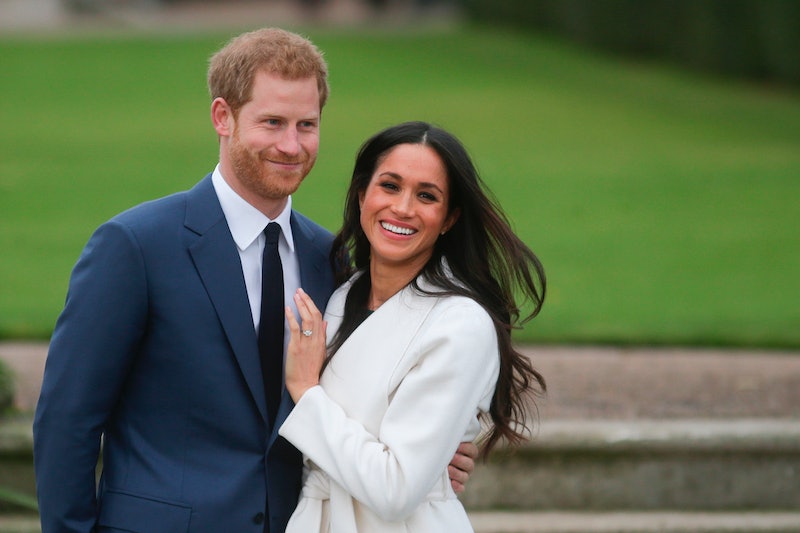 Set in yellow gold, Meghan Markle’s engagement ring features three diamonds, each with a poignant significance for the couple. Fittingly, three-stone rings are said to represent friendship, love, and fidelity, as well as the couple’s past, present, and future.

The eye-catching central stone is a diamond from Botswana, where Prince Harry has spent a lot of time both during official visits and personal trips over his life and a country with significance in Meghan and Harry’s relationship. The couple revealed in their first TV interview with the BBC following the announcement that Meghan flew out to Botswana to spend five days there with Harry in the early stages of their relationship.

According to the authors of the Meghan and Harry biography Finding Freedom, Omid Scobie and Carolyn Durand, Harry started the search for the perfect diamond a whole six months before their engagement was officially announced in November 2017.

“That May [2017], Harry traveled alone to Botswana in his role as patron of Rhino Conservation Botswana,” write Scobie and Durand in the biography. “While in Africa, he did a little secret diamond scouting with a close friend who helped him to source the perfect conflict-free stone.”

While Princess Diana’s engagement ring (which once belonged to Harry) was taken off the market when Prince William proposed to Kate Middleton in 2010, the Duke of Sussex found another way to make sure that his late mother would be with him and Meghan on their special day. Flanking the huge centre stone are two diamonds from Diana’s personal jewellery collection, “to make sure that she’s with us on this crazy journey together,” Harry said during the couple’s first post-announcement interview with the BBC.

Following royal tradition that engagement rings should be an heirloom or custom-made, so that it is inimitable by anyone else or any other designer, Prince Harry designed the ring — made by court jewellers Cleave and Co. — himself, and revealed in the couple’s engagement interview that he fashioned the band in yellow gold “because that’s [Meghan’s] favourite”. Harry’s mother, Diana, however, caused a stir when she chose the now-famous sapphire Garrard engagement ring from a catalogue.

In May 2019, eagle-eyed viewers may have noticed some changes to Meghan’s left ring finger. But the majority of the world’s eyes were on baby Archie, who was being introduced to the world for the first time. It makes sense then, that we didn’t get a full glimpse of a somewhat different ring until later that year.

It wasn’t until the Duchess of Sussex made her first public appearance following Archie’s birth alongside the Royal Family at Trooping the Colour, the queen’s annual birthday parade in June 2019, that we could see Meghan’s engagement ring adaptations in the daylight.

It looks like the new mother made changes to the band of her gorgeous custom-made engagement ring, designed by Harry. The couple haven’t made any official statements on the changes, but from images we can see that Meghan has adapted the three-stone engagement ring to have a pavé diamond band replacing its original yellow gold band.

What About Meghan Markle’s Wedding Ring?

Meghan’s gold wedding band seems to be a simple yet elegant extension of her style, but the story behind the duchess’s wedding ring is anything but simple. Whilst Prince Harry broke with royal tradition by choosing a platinum wedding band, which — contrary to his brother — he actually wears, Meghan Markle wears a gold wedding ring made by the same court jeweller that created her engagement ring, Cleave and Co.

The Welsh gold wedding band continues a royal tradition that, per the Telegraph, dates back to the wedding of George VI and Elizabeth Bowes-Lyon (the queen mother) in 1923, when the royal family was gifted a nugget of gold from the Clogau St. David’s mine at Bontddu in North Wales.

Kensington Palace confirmed ahead of the royal wedding that Meghan’s ring was fashioned from a piece of Welsh gold that was a gift from the queen. The extremely rare gold used to create Meghan’s wedding ring, from the now-defunct St. David’s mine, can cost up to five times as much as normal gold of the same karat, and was used to make wedding bands for the queen, Princess Margaret, and Diana, Princess of Wales, as well as the queen mother.

Shortly after the birth of her son Archie, Meghan Markle appeared with an additional piece of jewellery on her left ring finger, a third ring. The additional pavé-set diamond band looks to be an eternity ring, which symbolises… well, eternity, and everlasting love, usually given as a gift to commemorate a milestone or wedding anniversary.

Reportedly made by the queen’s private jeweller, Harry Collins, the additional diamond ring may well have been a gift from the Duke of Sussex for the couple’s first wedding anniversary or following the birth of Archie, as a “push present” — a gift mark the occasion of her giving birth to their child, a popular gift in Meghan’s native United States.

According to Harper’s Bazaar, Prince Harry collaborated with jewellery designer and friend of Meghan’s Lorraine Schwartz to create the eternity ring as a gift to mark the couple’s wedding anniversary and their growing family. Prince Harry reportedly paid tribute to his family by asking Schwartz to add birthstones for Meghan, Archie, and himself on the underside of the delicate ring.