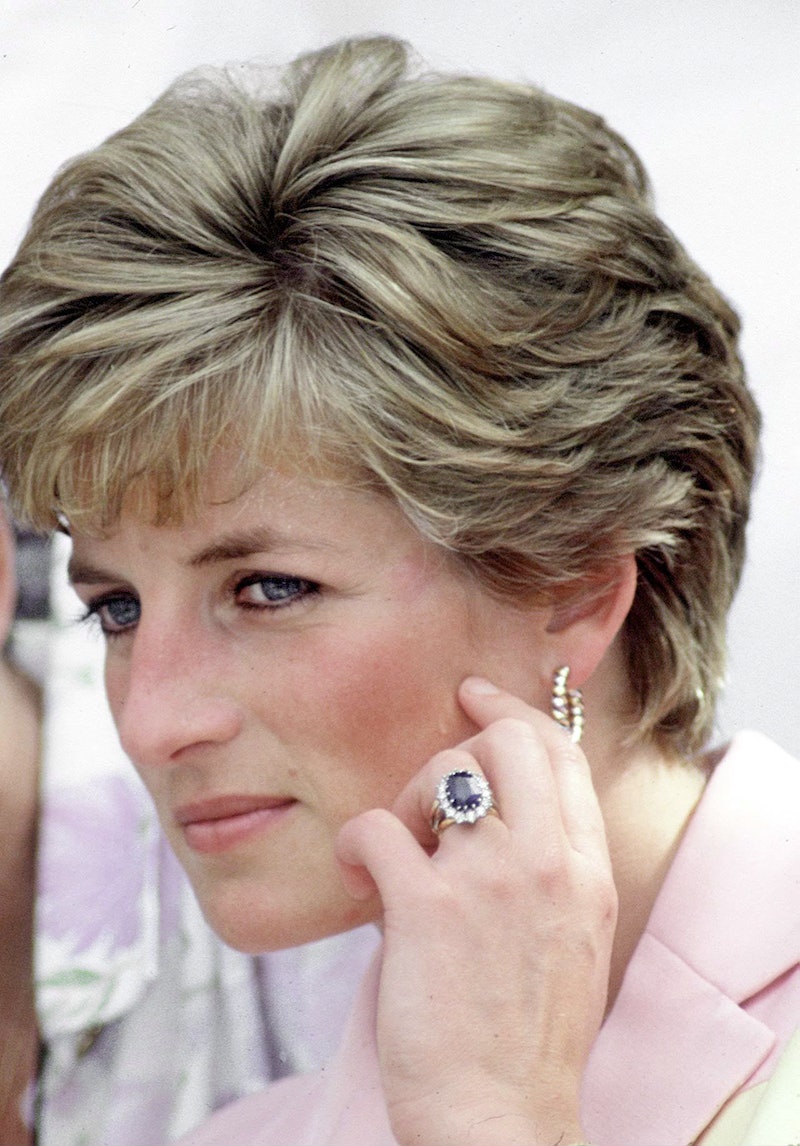 Princess Diana’s engagement ring is arguably one of the world's most recognized pieces of jewelry. The large central sapphire surrounded by diamonds is an iconic part of royal jewelry history, and it's about to take a starring role on the small screen, too. Season 4 of The Crown covers the time period between 1977 and 1990, which of course includes the relationship between Prince Charles (Josh O'Connor) and the late Princess Diana (Emma Corrin), so we expect the ring to be a scene-stealer in its own right. But, as is often the case with dramas based on real events, how much of it will stay true to life? As the long-awaited latest season begins this weekend, we look back at the real story behind Princess Diana’s engagement ring.

When Prince Charles asked a 19-year-old Lady Diana to marry him in 1981, he selected a few rings from the then crown jewelers Garrard for her to choose from. Within this small number was the Marguerite ring — a 12-carat oval blue Ceylon sapphire surrounded by 14 diamonds, set on an 18-karat white gold band.

As we now know, this is the ring Princess Diana selected. However, the choice is rumored to have ruffled a few feathers. Rather than raiding the royal family’s jewelry collection (which was customary at the time), Prince Charles purchased the engagement ring from a stock collection, meaning that it wasn’t a bespoke design, and any member of the public could also purchase the ring (if they had a cool £47,000 lying around, of course).

Prince Charles is said to have been drawn to select the Garrard ring, as it was similar to a sapphire and diamond brooch that was given to Queen Victoria by Prince Albert, as a present for his soon-to-be bride. Prince Albert commissioned Garrard to create the brooch in 1840, and Queen Victoria “found she loved it so much that she decided to wear it on her wedding day as her something blue on the front of her dress,” Sara Prentice, Garrard’s current creative director, told Vogue.

Over her 63-year reign, Queen Victoria amassed a grand collection of jewels. Yet she returned to the sapphire brooch time and time again, wearing it up until Albert’s death in 1861. Albert, Prentice said, had a particular fondness for the blue stone, too.

Victoria left the brooch to the Crown in her will, meaning that the heirloom will always belong to the reigning monarch, and it seems Queen Elizabeth is just as enamored with it. The queen has been seen wearing it on many high-profile occasions, including Prince William’s christening in 1982 and when she met with President John F. Kennedy in 1961.

“[The brooch] was said to be a strong influence on Prince Charles when he came to Garrard to purchase a ring for Lady Diana,” Prentice said. “I would imagine growing up being surrounded by your mother and your grandmother [with] such beautiful, incredible jewelry ... it would stick with you.”

At the time, there were various unconfirmed suggestions as to why Diana chose the ring: because it was the largest and most expensive or because it reminded her of one of her mother’s rings. Whatever drew her to it initially, it was clear that she loved it, as she continued to wear the ring long after her divorce from Prince Charles.

After Diana’s untimely death in 1997, the ring was returned to the royal family. Both William and Harry inherited a piece each from their mother’s personal jewelry collection, with William choosing a Cartier Tank watch and Harry choosing the engagement ring. How, then, did it end up on Kate Middleton’s hand?

In the Amazon Prime documentary The Diana Story, Diana's butler Paul Burrell claimed that Harry had originally chosen the Ceylon sapphire ring, telling him at the time: “I remember when I held mummy's hand when I was a small boy, and that ring always hurt me because it was so big.”

The brothers are rumored to then have swapped heirlooms, due to a reported (unconfirmed) agreement that whichever brother was to be engaged first should have the ring. When William was set to propose to Kate in 2010, according to Burrell, Harry told William: “Wouldn’t it be fitting if she had mummy’s ring? Then one day that ring will be sat on the throne of England.” (We’re not crying, you’re crying.)

“It’s my mother’s engagement ring, and it’s very special to me, as Kate is very special to me now as well. It was only right the two were put together,” Prince William told ITV’s Tom Bradby when the engagement was announced. “It was my way of making sure mother didn’t miss out on today and the excitement and the fact that we’re going to spend the rest of our lives together.”

Prince Harry still ensured that Diana was part of his proposal to Meghan Markle in 2017. Designing Meghan’s engagement ring himself, he used two diamonds from his mother’s collection and one from Botswana, where he does a lot of charity work and where the couple had spent some time. Soon after Prince Harry proposed, Cleave & Company, which made Meghan's engagement ring, announced that no replicas would be made — making sure that unlike Princess Diana's, the ring design would remain exclusive to the royals.

The Duchess of Sussex was also gifted Diana's famous emerald-cut aquamarine ring by Prince Harry on their wedding day. And it seems she inherited the Cartier Tank watch originally chosen by Prince William, too, which she is reportedly wearing in the couple's latest portrait captured by photographer Matt Sayles, per The Independent.