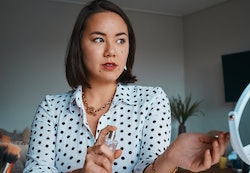 The noughties were a golden era for perfumes. From the bondage-rope trussing of Dior J'Adore Infinissime to the cutesy bows adorning Chloe Rose Tangerine – not to mention the gallons upon gallons of Impulse body spray lingering in changing rooms across the country – it was an era of decadent bottles, sickly-sweet scents, and cutesy floral notes.

The undisputed daddy of the ‘00s fragrance industry, meanwhile, has to be the candy-scented Alien, which is now enjoying something of a comeback. You heard it here first – impossibly chic little vials of liquid named edgy things like Elephant Dung are out, and garish containers of purple juice are back.

First released in 2005, Alien is one of the best-known perfumes by the late French designer Thierry Mugler, who passed away on Jan. 23, aged 73. Following the wild success of Mugler’s previous signature scent Angel – a ‘90s staple steeped in patchouli and vanilla – Alien came next. According to Mugler, it’s “a rich, bewitching essence that illuminates and reveals the feminine power.” In other words, scary and hot.

Now, the classic fragrance is enjoying something of a resurgence on #perfumetok; the TikTok spot for all things scent-related.

The dedicated hashtag #alienperfume has racked up 1.2 million views so far: and along with countless TikTok-ers crowning it their signature scent, you’ll find tonnes of recommendations from users who have tracked down cheaper dupes with similar scent-notes. @Miss.shopper.holic swears that Home Bargains’ 99p perfume Madonna Exotique is a near-perfect match for the perfume, which retails at £79 for a 60ml bottle.

Rose-tinted nostalgia hasn’t convinced everybody however: one user, @letstalkperfume has posted a dramatic reenactment of being knocked unconscious by its fairly potent flavour notes. Well, I guess it’s impossible to please everyone.