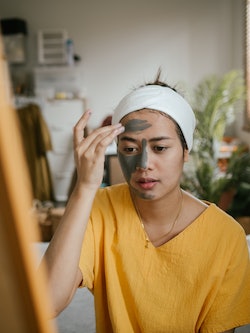 You probably know the feeling: Waking up with cotton balls in your mouth, your stomach doing tortuous acrobatics in your belly, you head pounding to an incessant, throbbing beat. You are simultaneously exhausted and unable to sleep, your face feels puffy, and a dull ache in every joint and muscle makes you suspect that somehow you were hit by a tractor and then forgot about it. You struggle to remember exactly why it seemed so important to do those final tequila shots, while at the same time wishing that a giant crack in the Earth would open up and swallow you whole, thus putting an end to your pulsating, bottomless misery. A scientific look at what happens in your body when you're hungover reveals a host of causes for your pain.

"Alcohol is first processed by your stomach and small intestine, where it is then absorbed in your bloodstream," Dr. Michael Richardson M.D., a provider at One Medical, tells Bustle. It then moves on to be metabolized by your liver. "How well you process alcohol will vary based on how much alcohol is absorbed at once, the level of enzymes you have in your system to break down the alcohol, and your overall body type," he says. And that, in turns, will affect how bad your hangover feels.

When you’re in the middle of one, a hangover can seem like nothing so much a cruel cosmic punishment from the gods, a price we pay to the universe in exchange for having fun, but there’s actually lots of science on hand to explain to us why an excess of alcohol has the power to make use feel like desiccated remains abandoned in a shallow grave. Scientists refer to hangovers as “veisalgia,” and although they don’t know everything about why and how they occur, what they do know may help you understand why you feel so rotten after a night on the town. (It won’t, however, make your hangover actually go away. The only thing you can do to make that happen is drink a lot of fluids, eat some real food, and try to rest.)

Read on to find out just what kind of havoc booze is wreaking on your hungover body:

"Alcohol is a diuretic, and tends to contribute to significant dehydration," Dr. Scott Braunstein M.D., regional medical director at Sollis Health, tells Bustle. This means it makes you need to urinate more frequently than normal. Booze inhibits your pituitary gland’s production of vasopressin, the hormone that helps the body to retain water. When vasopressin is suppressed, liquids essentially go straight through you. That means that your organs — including your brain — are struggling to get enough fluid. This lack of fluid can cause the blood vessels of your brain and the tissues surrounding the brain constrict, triggering the pain receptors in your head and causing headaches. "This leads to symptoms including headache, fatigue, cloudy thinking, and malaise," Dr. Braunstein says.

2. Alcohol produces toxins in your body.

"Alcohol is broken down into acetaldehyde, a toxic intermediary which can cause flushing, nausea, vomiting, fast heart rate and sometimes fainting," Dr. Braunstein says. Acetaldeyde is the thing that causes a lot of the symptoms of hangover, so you can blame it next time you're stretched out on the bathroom floor.

4. It does a number on your stomach.

Alcohol isn't a friend to your tummy; before it even gets to the liver and small intestine, it can start wreaking havoc on your digestion. "Alcohol is directly toxic on the mucosa of the stomach," Dr. Braunstein says. "This results in symptoms including nausea, vomiting, abdominal pain, bloating, loss of appetite, or symptoms similar to heartburn." When your stomach lining is irritated by alcohol, expect to hear bout it.

5. Your blood alcohol level and congeners combine to make trouble.

Not all drinks are created equal when it comes to hangovers. "The alcohol in your bloodstream will be dependent on a number of factors, such as alcohol content (the higher percentage of alcohol in the drink, the more there is absorbed), and how the drink is made (carbonated versus hard liquor versus a mixed drink)," Dr. Richardson says. The more alcohol in your blood, the worse your hangover will be.

Types of alcohol that are high in congeners — chemicals produced during fermentation that aren’t alcohol — also cause worse hangovers than drinks that have lower levels."Some alcohols, such as brandy, bourbon, dark beer, and red wine, contain higher levels of congeners, and are are more likely to cause a hangover," Dr. Braunstein says.

When you have a hangover, you feel fatigued for a number of reasons, but one of them is simply that you’re not getting good sleep. Alcohol can make you feel tired, and send you to sleep quickly, but it can also disrupt your ability to experience restorative sleep. A 2019 study published in Journal of Clinical Medicine found that heavy alcohol consumption negatively affected sleep quality when people finally hit the hay, and that made hangovers feel much worse the next morning.

7. Hangovers can induce anxiety and panic.

Many people may not realize that anxiety and even panic can be symptoms of a bad hangover. Alcohol tends to relax the brain by blocking the activities of various neurotransmitters, like GABA and glutamate. As the alcohol wears off, those neurotransmitter levels start to rise — and that spike can make you feel anxious and panicky. A 2019 study published in Personality & Individual Differences found that "hangxiety" was much more likely in people who were naturally shy.

8. When you’re hungover, you’re not the sharpest tool in the box.

"Before alcohol is processed and cleared by the liver, it circulates throughout the body including the brain, which leads to cognitive impairment," Dr. Shadi Miri M.D. of One Medical tells Bustle. An analysis of hangovers and the brain published in Journal of Clinical Medicine in 2019 found that hangovers impair working memory and executive function — and the worse the hangover, the worse the effects.

More like this
6 Unexpected Causes Of Post-Workout Fatigue
By Carolyn Steber
9 Balance Training Exercises That'll Improve Your Mind-Body Connection
By Carolyn Steber
I Visited Remedy Place, The Social Club Transforming The Wellness Industry
By Rachel Lapidos
The 8 Best Pilates Exercises For Lower Back Pain
By Carolyn Steber
Get Even More From Bustle — Sign Up For The Newsletter

This article was originally published on November 23, 2015