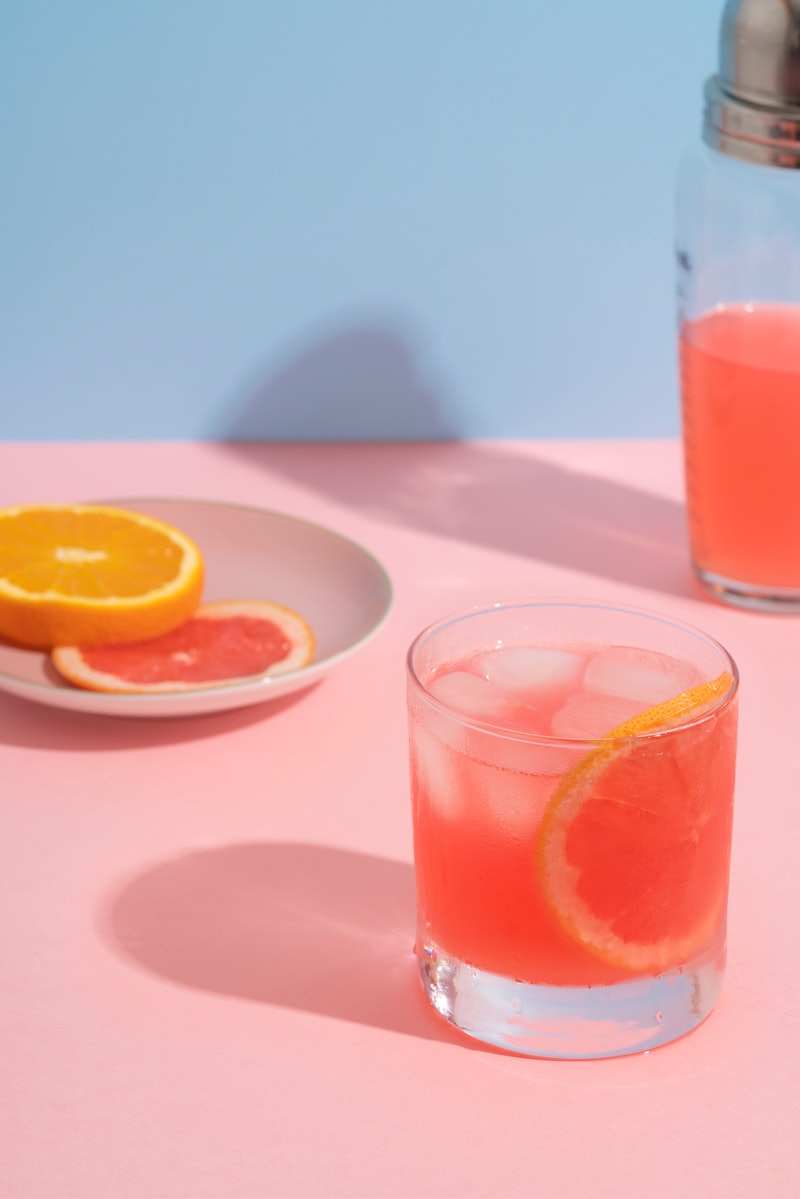 Not to be a buzzkill, but alcohol can be bad for your health. You don't need to drink outrageous amounts of booze every single day for your body to be affected by it. As little as one night of excessive drinking can mess with your body in all sorts of ways.

"The undeniable fact is that alcohol consumption does not promote better health but rather has many negative impacts upon one’s health," Dr. Donald A. Sansom D.O., associate medical director of substance abuse treatment center Sierra Tucson, tells Bustle. Alcohol, particularly when it's drunk to excess, can be linked to higher cancer risk, liver disease, immune system issues, damage to the stomach lining, and a host of other unpleasant health problems. At the end of the day, it comes down to how much you drink and how often, and the science is clear: it's not a good idea to drink a lot over time.

1. It Takes A Toll On Your Liver

Large amounts of alcohol prevent your liver from doing its job properly, which is to break down harmful substances in the body. "Long-term regular alcohol use can lead to diseases such as liver cirrhosis, or damage to liver cells," Dr. Alexa Mieses Malchuk M.D. tells Bustle. Cirrhosis causes the tissue of the liver to scar. If this happens, the liver is unable to rid the body of toxic substances (like, in alcohol's case, its byproduct acetaldehyde), so they can build up and damage tissue and organs. If you started drinking heavily in your teens, you're at higher risk of developing liver problems later in life, according to a study published in 2018 in Journal of Hepatology.

2. It Throws Off Your Gut

Over the long term, drinking is linked to a condition called alcohol-related gastritis, Dr. Sansom tells Bustle. "This is inflammation of the stomach lining." It's why you tend to throw up so much when you've got a hangover or have drunk too much. Over the long term, alcohol can damage the small intestine and make it harder for you to absorb nutrients from your food. People with alcohol use disorder, Dr. Mieses Malchuk says, often have folate deficiencies because their systems can no longer absorb folic acid effectively.

3. It Can Weaken Your Bones Over Time

Alcohol interferes with the replacement of bone tissue, according to the National Institute on Alcohol Abuse and Alcoholism. There's a delicate, ongoing balance in adult bodies between the erosion and remodeling of bone tissue, and long-term, regular drinking can severely disrupt that. Even worse, it could result in alcohol-induced osteopenia, where your bones are weak and find it difficult to heal. Drinking in excess means you're also more likely to face osteoporosis, a condition that causes your bones to weaken and brittle over time. A study published in PLoS One in 2018 found that heavy drinking increased the risk of osteoporosis in post-menopausal women by 1.7.

4. It Disrupts Your Sleep Patterns

"Alcohol consumption is actually notorious for impeding a healthy and full sleep cycle due to its metabolic pathway," Dr. Sansom says. Nearly every last one of us can attest to how easy it is to pass out after a couple glasses of wine. Don't be fooled, though — that Cabernet is seriously messing with your sleep cycle. After the alcohol wears off in the middle of the night, your REM pattern is disrupted. This might leave you sweating, anxious, and you might even have nightmares.

Additionally, that part of your REM cycle is the kind of sleep that contributes to strong memory and concentration. So when you wake up, even if you don't have a hangover, you're not able to perform at your best throughout the day.

A 2011 study published in Alcoholism, Clinical And Experimental Research found that women are more sensitive to the effects that alcohol has on their sleep than men. Compared to male participants who drank the same amount, the females tossed and turned more often, lay awake for longer, and got much less sleep. Not getting enough shut-eye has immense effects on your overall life in the long run, from increasing your risk for diseases to worsening stress and anxiety.

5. It Does Not Mix With Prescription Medication

If you take prescription medication, drinking alcohol while taking them can have dangerous effects on your body. Mixing cocktails with antibiotics can prevent the meds from doing their job, as well as result in unwanted complications, such as racing heart and dizziness, according to the Mayo Clinic. When paired with psychiatric medications, alcohol can increase their side effects, make you drowsy, and cause a rise in blood pressure. Alcohol should also never be mixed with prescription painkillers, since it can slow down breathing to dangerous or possibly fatal levels. Your doctor should go over these any and other side effects of mixing alcohol and medications when your medication is prescribed, and you should call them if you have any specific questions.

6. It Increases Your Risk Of Cancer

"Alcohol contributes to dozens of types of cancer," Dr. Sansom says. Women who drink more than three drinks a day are 1.5 times more likely to develop breast cancer, according to the National Cancer Institute. The chances for mouth and throat cancers rise significantly as well for individuals who drink more than 3.5 drinks daily — they are two to three times more likely to be diagnosed with cancers of the oral cavity, pharynx, and larynx. Liver cancer poses the highest risk, and is strongly linked to alcohol consumption, according to Cancer Research UK.

7. It Can Harm Your Immune System

"Alcohol binging tends to weaken a body’s immune system," Dr. Sansom says. A 2015 study published in Alcohol Research: Current Reviews found that alcohol consumption impairs a lot of your immune responses and makes you more vulnerable to viral and bacterial infections. If anybody's been insisting that beer can stimulate your immune system, they're telling you an old wive's tale.

This article was originally published on Feb. 17, 2016