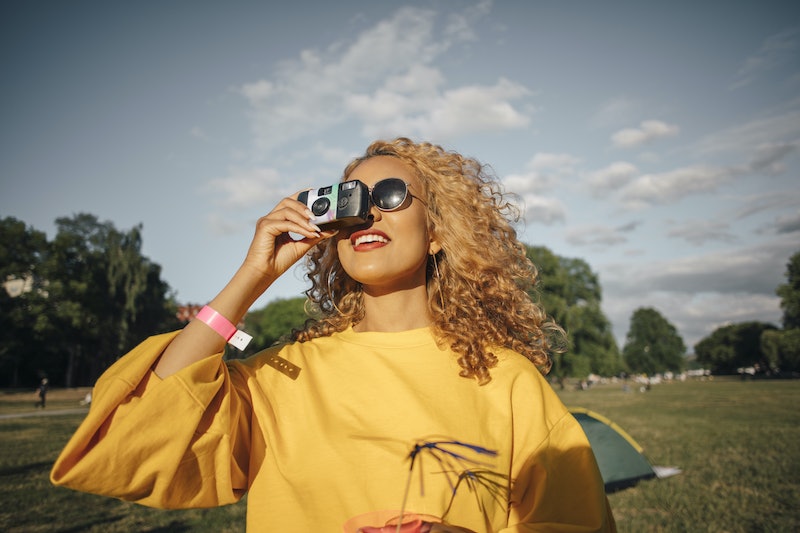 Déjà vu is one human experience that science has yet to nail down. That "I've totally seen this before" feeling (even though you haven't) is a bit spooky and elusive, and while researchers have their theories, what causes déjà vu is still a relative mystery to science. While perhaps the most common theory is that déjà vu happens when your mind is forming a false memory, some research suggests quite the opposite: that déjà vu is actually your mind's way of fact-checking itself for accuracy.

"For most people, déjà vu is a relatively infrequent, fleeting experience that can be perplexing, amusing, or even annoying or frustrating, but harmless nonetheless," Anne M. Cleary Ph.D., head of the Human Memory Lab at Colorado State University and an expert on déjà vu, tells Bustle. She believes that déjà vu isn't a false memory at all — it's possibly a real one that's been misfiled.

Research presented in 2016 by scientists at the University of St. Andrews bears this out. In their study, researchers read their volunteers a list of related words: "Bed," "pillow," "night," and "duvet." This is a common set-up for studies on déjà vu: In previous false memory studies, participants have been asked if they had heard the word "sleep" — and they said yes, even though they hadn't heard the word. It's an example of their brains remembering something that never happened, inspired by the fact that the words they actually heard are definitely related to the word "sleep."

Déjà vu can occur when you have this type of familiarity feeling in a situation that also feels to you as if it is completely new, so shouldn’t feel familiar.

To make matters even more interesting, the participants were inside an fMRI while answering these questions, allowing researchers to examine their brains. If the false memory theory were accurate, then the hippocampus would've been activated, but it wasn't. It was instead the frontal area that lit up — the area that's associated with decision-making.

This isn't the only research pointing to the fact-checking theory of déjà vu, Cleary says. "Déjà vu may be a special case of familiarity-based recognition, when you have a sense of having experienced something before but cannot pinpoint why," she says. "Déjà vu can occur when you have this type of familiarity feeling in a situation that also feels to you as if it is completely new, so shouldn’t feel familiar." This means the brain is trying to make sense of everything using normal memory processes, rather than forming false memories. The lead researcher behind the Edinburgh study, Akira O'Connor, told New Scientist that people with excellent memories may be far less likely to experience déjà vu, as their brains won't produce memory errors as often.

Some researchers believe that déjà vu is fueled by the fact that our brain is trying to make whole stories out of the bits and pieces of information it receives. This could lead to "mismatches" in the brain's neural pathways. There are still other theories about what causes déjà vu — in fact, there are more than 40 of them. Yet another is that because there is a split-second delay when one side of the brain sends information to the other, one side will unavoidably receive information twice: once directly from the source, and once from the other half of the brain.

Déjà vu isn't an experience you can easily recreate in a lab, but scientists are getting closer to understanding one of the eeriest experiences you can have.

More like this
5 Signs You Have A Toxic Relationship With Yourself
By Lexi Inks
Why We Love Investigating Friendship Breakups
By Carolyn Steber
Storm Reid Is A Morning Routine Girlie
By Carolyn Steber
The Crab Walk Exercise Improves Your Posture & Overall Strength
By Carolyn Steber
Get Even More From Bustle — Sign Up For The Newsletter
From hair trends to relationship advice, our daily newsletter has everything you need to sound like a person who’s on TikTok, even if you aren’t.

This article was originally published on Aug. 18, 2016