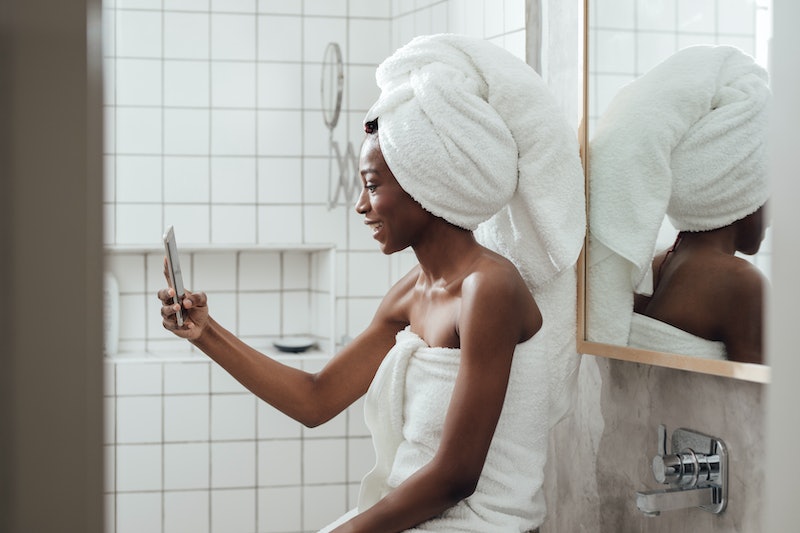 Shelter-in-place doesn't have to mean celibacy-in-place. Though you can't literally meet up for drinks, it's totally possible to turn up the heat with someone, all from the comfort of your own quarantine. While some may stick to a FaceTime Frappuccino (the internet version of, "Wanna get coffee?"), hanging out over video chat can enable your camera and your imagination. From naked crafting to green screen-backed dinners, the wildest Zoom dates truly know no limits.

As coronavirus continues to spread, more and more people are staying in their homes. While self-distancing may change the structure of a traditional first date, it certainly isn't stopping people from finding love (or, you know, someone hot to hook up with.) According to a recent report from OKCupid, 93% of global respondents are still digitally dating right now, with video chatting, playing video games, and joint-watching movies or TV shows as some of the most popular long-distance date activities. While Animal Crossing and NetflixParty can surely provide a virtual space for a fun and flirty e-hang, there's no shortage of ways to try to woo your internet boo.

Bustle asked nine people about their wildest Zoom dates to date, and what they said will make you red in the Face(Time).

The other night I had video chat sex with this total hottie I met through an online queer chat room. We edged, and dirty talked with each other for, like, 30 minutes, and when we both finished, we called in a night. Honestly, it was incredible to be able to focus on my own pleasure rather than attending to someone else’s or worrying about how they perceived me or if they were comfortable. Shout out to Zoom sex.

We're both artists, a little kinky, and we've been doing 'naked crafting' dates where we do our projects naked. I've been working on a painting, and he's making friendship bracelets. If I can find a way to sanitize a canvas, I want to send him something.

Toward the end of the date, he turned, and I could see that the only decorations in his room were a Shepard Fairey-style portrait of Reagan and a poster that literally said: 'I Heart Capitalism.'

He kept using green screens and filters. At first, it was fun to pretend that we're talking on the beach or in a restaurant, but then he started using a Memoji face sticker, and I spent 20 minutes talking to an animated mouse. It was like I was in a bad children's movie.

He was in his living room, and he didn't have headphones in. His roommates were all around and watching a movie. I was initially a little offended, but his roommates were pretty funny. I ended up asking them what they were watching and watched it on my computer along with them.

6. A Work In Progress

At first, I thought he was shy, and video chatting can be a little distant, but then I realized he was completely consumed with other things on his computer and typing a lot. It looked like he was answering emails as I was trying to talk. I asked if there was a better time we could call, but he kept saying he was almost done and just needed five more minutes. I watched him work for about two minutes and then closed my computer.

The guy I've been seeing didn't tell me that he had gone to quarantine at his parents' house. When we video chatted the other night, and I was like, "Where are you?" and he was like, "My parents' house! Mom, say hi!" and turned the camera so his mother could meet me. I was, thankfully, fully clothed, but you'd think he could have given me a warning or something!

His screen froze while we had cyber sexy time, but I was in too deep to stop, so I just finished on my own, but then I pretended I hadn’t already finished and was still 'so close' when his WiFi connection got better. And then just finished again.

Their camera was pointed at their dog the entire date. I know they really love their dog, and, yes, it's a really cute dog. But we'd been texting for a week, and I was excited to have a face to face conversation, even just over video chat.