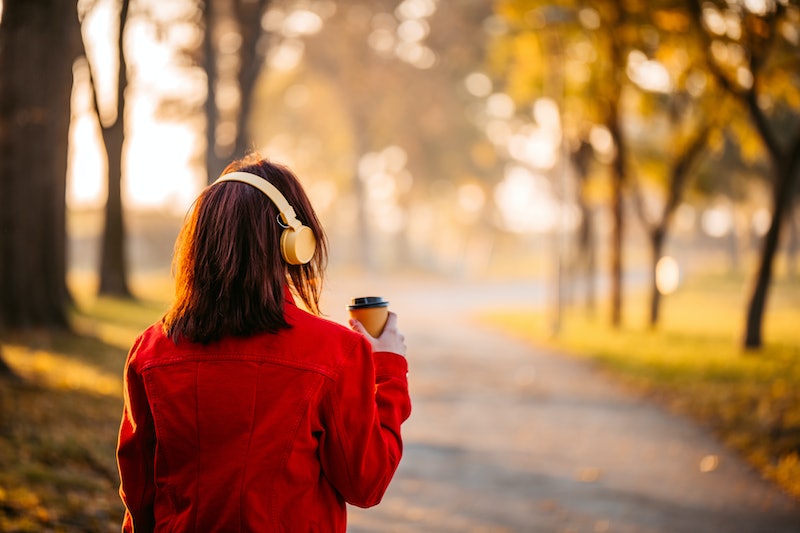 A lot has changed over the last 10 months, and chances are your pre-pandemic morning routine feels like a world away. Gone are the days of precariously doing your mascara while squashed under a stranger's armpit on the bus at 7:30 a.m. However, a new study has suggested not travelling into work can have some pretty negative health effects. So what is a fake commute and why should we think about taking one?

Between August and September this year, The Office Group commissioned a survey of 2,000 workers, looking at factors that contribute to burnout. The top three were working longer hours, the inability to separate work and personal life, and an uncertain job market; and one third of respondents said lockdown had pushed them closer to burnout. A study by Vitality supported these findings, reporting that six in ten workers found it increasingly difficult to separate their work and personal lives while working from home.

You may not remember your commute particularly fondly, especially in the colder months, but getting some fresh air before you start the working day can have a massive impact on your physical and mental wellbeing. Here are our tips for creating a fake commute, and the benefits you can expect along the way.

How do I create a fake commute?

Fitting in another activity may feel like it adds to the pressure to be ‘productive’, however, tagging a 20-minute walk on to the start and end of your day will provide some much-needed separation between work and home. This 'fake commute' gives you a window of time to decompress, similar to the positive switch-off of travelling to and from the office.

Vitality found that while we've gained an average of an hour a day by not commuting, 40% of people said they’ve filled this time by working longer hours or sleeping more. Yes, getting out of bed earlier is difficult, especially during winter, but try to remember the aspects of your commute that you enjoyed, and slot them into your fake commute.

Make a coffee or treat yourself to a take away hot drink en route. Listen to a podcast or audiobook. Do a guided meditation while you walk, or call that friend you’ve been meaning to get in touch with. The beauty of a fake commute is that you can explore your local area too, and it doesn't involve any public transport.

What are the benefits of a fake commute?

If you’re walking, it’s likely you’re not looking at your phone, work emails, or to-do lists. Spending even a short amount of time outdoors can make you feel more grounded, and reduce feelings of anxiety and stress. The NHS has also found that a walk outside can help you better manage symptoms of seasonal affective disorder (SAD) and depression.

Taking a fake commute in the morning may also help you get a better night's sleep. Research by the National Institute of General Medical Sciences reports that the cells in your eyes need a certain amount of light to ensure your body’s internal clock is working effectively, so taking a walk as soon as the sun's up will kickstart your body clock and help you to wind down at the right time in the evening. Plus, the more Vitamin D you get from the sun, the better your immune system will be.

As Neville Koopowitz, CEO of Vitality, suggests, “by taking just 20 minutes each day to introduce a habit, such as a walk, moment of meditation, or even just getting outside to grab a coffee, we can all improve our physical and mental wellbeing during a time when it’s crucial we look after ourselves."