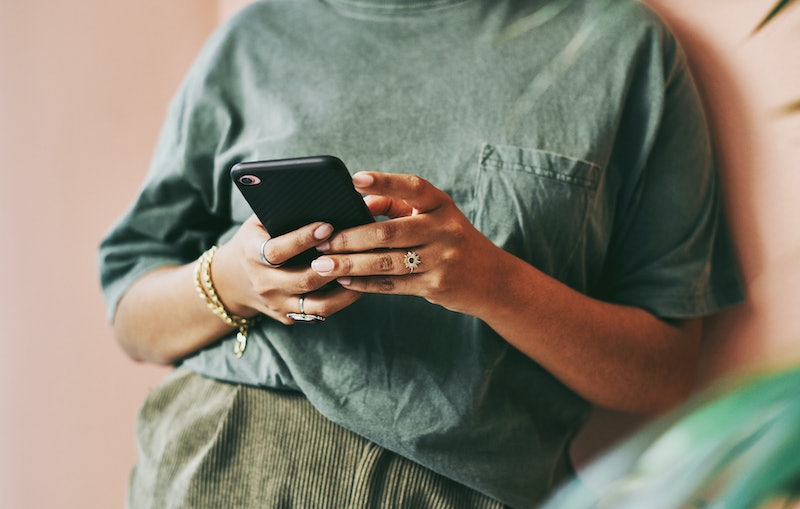 In a year when “I hope this email finds you well” has become a particularly laughable sentiment, new data shows that you’re definitely not alone if, well, emails didn’t find you super great.

During 2020, and especially the first weeks of the pandemic, the Crisis Text Line, a national service for folks in need of mental health assistance, experienced an uptick in both urgent texts and volunteers to help others, according to their annual report. Over three-quarters of a million people reached out in 2020; during March and April alone, over 15,000 people signed up to become crisis counselors.

“Our nation and the world experienced trauma and adversity at historic levels in 2020,” Dena Trujillo, CEO of Crisis Text Line, and Lili Torok, senior data researcher, write in an email to Bustle. “If we really care about improving America’s mental health, reducing racial trauma, gun violence, the effects of mass grieving, we absolutely must pay close attention to what the data tells us,” they wrote.

How Has The Pandemic Impacted Mental Health?

Crisis Text Line collected information about different categories that were distressing texters at the time of the conversation: depression/sadness, anxiety/stress, suicide, and isolation/loneliness were the topics that came up the most. Each of these concerns was discussed in over 20% of conversations with crisis volunteers. Grief, self-harm, eating and body image, bullying, emotional abuse, physical abuse, sexual abuse, and substance abuse also came up during these exchanges.

A big part of the 2019 to 2020 increase in texts about anxiety was driven by a jump the week lockdowns began, in mid-March, but texting rates went down to 2019 levels around June. “This could suggest that once stay at home orders were lifted and people adjusted to pandemic life, anxiety levels for our texters returned to the normal levels,” Trujillo and Torok note.

Though Crisis Text Line doesn’t release data about specific topics that come up in exchanges, anxiety was a central focus of 35% of conversations with texters, Crisis Text Line reports. This is consistent with other research about mental health during the pandemic: according to a survey released in the fall of 2020 by the American Psychological Association (APA), 62% of people living in the U.S. experienced more anxiety during the pandemic than they had the year before.

The mental health toll of racism played a large role in people’s stress in 2020, the APA survey reported. The APA found that 83% of Black people, 78% of Latinx or Hispanic Americans, and 77% of Asian Americans agreed that systemic racism impacts mental health in the United States.

The Crisis Text Line data also found that frontline workers were 25% more likely to mention anxiety during the pandemic, and texters between the ages of 18-34 were likelier than other age groups to discuss it. The number of conversations about anxiety in 2020 increased 5% over the previous year, per the report.

Did Depression Increase During The Pandemic?

According to a study released in March 2021 by the Journal of the American Medical Association, 2020 saw a 5.6% decline in death by suicide across the country. The data that Crisis Text Line collected throughout the year matched that: overall, there was a drop in conversations about suicide with texters by 20% across 2020.

That doesn’t necessarily mean people were less depressed per se, though 2020 closed out with a 10% drop in conversations about depression. More than a third of exchanges with Crisis Text Line were focused on depression, which remained the most common experience texters said they were struggling with.

With anxiety on the rise in 2020, Crisis Text Line, which can be reached by texting HOME to 741741, found that more people seem to be talking about mental health and seeking help. “There is power in community, which is why support groups work and why text lines and Crisis lines work because connection is important,” Trujillo and Torok say. “Sharing the trauma can, reduce stigma, increase and enrich human connection and make people feel less alone.”

More like this
Why Being “Too Sensitive” In Relationships Is A Good Thing
By Lexi Inks
18 Hinge Prompt Answers To Try If You’re Looking For Something Casual
By Lexi Inks
How Many Burpees Should You Do Per Day? Here’s What Fitness Trainers Say
By Carolyn Steber
The 11 Benefits Of Aerial Yoga, According To Trainers
By Carolyn Steber
Get Even More From Bustle — Sign Up For The Newsletter
From hair trends to relationship advice, our daily newsletter has everything you need to sound like a person who’s on TikTok, even if you aren’t.