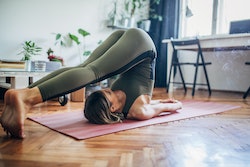 Sometimes picking up a joint, vape pen, or gummy can seem like the best way to wind down after a long day (particularly if you live in a place where it's legal) — but you might be wondering what cannabis does to your body over time. It's a complex plant, and its impact on your health is still being studied. But even with decades of legal restrictions slowly lifting, you might wonder whether you can experience a “hangover,” addiction, or other negative health effects from using weed regularly.

Pot has been found to have more health benefits over the last few years, like alleviating chronic pain and helping insomnia. But depending on how often you smoke, there could be risks, too.

"Work from my lab and others does suggest that frequency of use correlates positively with cannabis-related problems," Mitchell Earleywine Ph.D., professor of psychology at the University of Albany, tells Bustle. "But the effect isn't particularly big." Your experience will be pretty different if you're an occasional weed-brownie-haver as opposed to a several-times-a-day vaper.

Whether you identify as an occasional or daily user, a bong ripper, or a gummy-snacker, here's what's happening in your body when you use weed.

Scientists are still trying to figure out how many of weed's effects are temporary, what's long-term, and how much dosage is required. (And then there's the fact that men react differently to women when it comes to cannabinoids, which is often not used as a factor in studies.) It’s good news for vape fans — "Occasional use by adults is generally safe, particularly for those who use the vaporizer," Earleywine says.

One way a smoking session every few months may hurt your body is in the immune response. There is evidence cannabinoids interfere in our resistance to infection. One study in the Journal of Cannabis Research in 2020 found that heavy cannabis use — defined as seven or more hits in the past 30 days — tended to increase white blood cells, which indicates that the immune system is under strain, but it's not clear if occasional use will have the same effects.

A single hit will significantly impair your balance, your reaction time, and your ability to form new memories, but these effects will wear off as your high does. "The impairment from cannabis relates to impaired ability to deal with unexpected events, like avoiding a car that comes out of nowhere," Matthew W. Johnson, Ph.D., professor of psychiatry at Johns Hopkins University School of Medicine, tells Bustle. For that reason, it’s best to not get behind the wheel if you’ve been using weed. And 2015 study in Schizophrenia Bulletin has found that just one hit can cause paranoia in some people, which you probably knew.

What Is The Effect Of Using Weed Monthly?

Determining whether risks increase with use when it comes to cannabis is a bit tricky. "Monthly use has no meaningful impact," Jonathan Caukins Ph.D., professor of operations research and public policy at Carnegie Mellon University's Heinz College and an expert on cannabis legalization, tells Bustle.

Having a monthly smoke may be linked to temporary harm to cognitive skills like memory, assimilation of new information, and attention, but it's likely to be passed pretty quickly. According to a review of studies published in the Journal of Addiction Medicine in 2012, a monthly user will "spring back" from this damage over four weeks of abstinence. Plus, that kind of slowed-down feeling and inattention is part of what might draw someone to using weed in the first place, particularly if they’re stressed or overwhelmed.

One study, published in 2014 by the Society Of Prevention Research, looked at boys throughout their lives, from 7th grade to age 35. Monthly weed use was common, and it didn't seem to make a difference to the 35-year-olds' health issues, medications, injuries, or hospitalizations. Men who didn't smoke weed had the same outcomes.

Can Weekly Marijuana Use Make You Tired?

When you smoke weekly, health risks go up. A 2020 study of 3,400 people published in JACC Cardiovascular Imaging found that weekly users showed problems with the left ventricles of their hearts and shifts in their heart structure. Regular use has also been linked to an increased risk of heart attacks, particularly in the first few hours after a session. While it isn’t as risky as smoking cigarettes, there are still some health worries.

A 2011 review of weekly users, published in the Indian Journal of Psychiatry, found that going cold turkey for a month can restore cognitive powers, from reaction time to memory and dexterity. Other studies, though, only showed partial recovery. The Canadian Centre on Substance Abuse & Addiction did a roundup of studies in 2019 that found weekly smoking was much less likely to produce permanent cognitive problems than daily smoking.

For all the fearmongering, even daily use of weed isn't going to be that harmful, all things considered. A 2015 study published in Annals of the American Thoracic Society stated fairly definitively that, even after 20 years of daily use, weed smokers were still able to expel the same amount of air from their lungs as non-smokers.

The scientific opinion on daily smoking and lung cancer isn't clear either. Cancer Research UK found that some studies believe there is a link, while others don't believe the indications are strong enough. They point out that the huge variation in the strength of weed, the fact that people sometimes smoke it with tobacco, and the different ways individuals process it all make a link hard to pin down. "Although cannabis does increase symptoms of bronchitis like coughing and wheezing, it does not appear to elevate [the] risk for lung cancer," Earleywine says.

There's an argument that daily, heavy spliff use may actually alter the structure of your brain. "Daily use has many dangers, including most obviously altering brain pathways," Caukins says. A 2014 study published in PNAS found that daily users seemed to have a smaller orbitofrontal cortex, the part of the brain that helps with emotional and decision-oriented processing but also had denser links between different parts of the brain. A 2017 study published in Pediatric Neurology also found that chronic weed use was linked to damage in the brain's white matter.

"One effect is subtle memory deficits," Johnson says. "These seem to disappear with about a month of abstinence." Daily use can also result in dependence, he says, which means you start feeling irritable, sleepless, and lose your appetite whenever you stop.

Can You Get A Hangover From Using Weed?

Along with all of the above potential effects of daily, weekly, or monthly weed use, you may be wondering whether you can experience a hangover similar to the one that comes with a night of heavy drinking. Previously, Dr. Scott Braunstein M.D., medical director of healthcare organization Sollis Health, told Bustle that “Marijuana withdrawal would be a more appropriate name for [a weed hangover]". While research is based on heavy, regular users rather than occasional weed users, it’s a good idea to look out for the potential symptoms. They include headaches, brain fog, feeling dehydrated, and fatigue. If you feel those effects, it’s not serious, but you might need to take a break, get some rest, and drink some water. Leaving it a little while before using weed again is a good idea.

The Bottom Line: The Effects Of Regular Weed Use

"The data on cannabis and altered brain structure only seem to appear in those who used the plant heavily while still very young," Earleywine cautions. And these findings have been hard to replicate. "Plenty of daily users have literally no problems related to the plant, and some occasional users consume in unsafe ways," he says. "Those who begin use early in life tend to show more problems with the plant than those who start when they are older."

So frequency may not be the be-all and end-all for determining how weed is affecting your health; what time of day you smoke, how you do it, and how young you were when you began smoking are all factors, too. Keeping track of how you feel and taking breaks as and when you need to is key to avoiding “hangovers” and other negative effects.

Readers should note that laws governing cannabis, hemp, and CBD are evolving, as is information about the efficacy and safety of those substances. As such, the information contained in this post should not be construed as legal or medical advice. Always consult your physician prior to trying any substance or supplement.

National Academies of Sciences, Engineering, and Medicine; Health and Medicine Division; Board on Population Health and Public Health Practice; Committee on the Health Effects of Marijuana: An Evidence Review and Research Agenda. The Health Effects of Cannabis and Cannabinoids: The Current State of Evidence and Recommendations for Research. Washington (DC): National Academies Press (US); 2017 Jan 12. 8, Immunity.

More like this
Here's Why Your Nose Runs When You Eat
By Carolyn Steber
I Tried TikTok’s Favorite Menstrual Cup & Here Are My Honest Thoughts
By Meguire Hennes
11 Upper Back Exercises That'll Help You Stand Upright
By Carolyn Steber
How Did Pilates Become So Popular?
By Elizabeth Narins
Get Even More From Bustle — Sign Up For The Newsletter

This article was originally published on Oct. 14, 2015