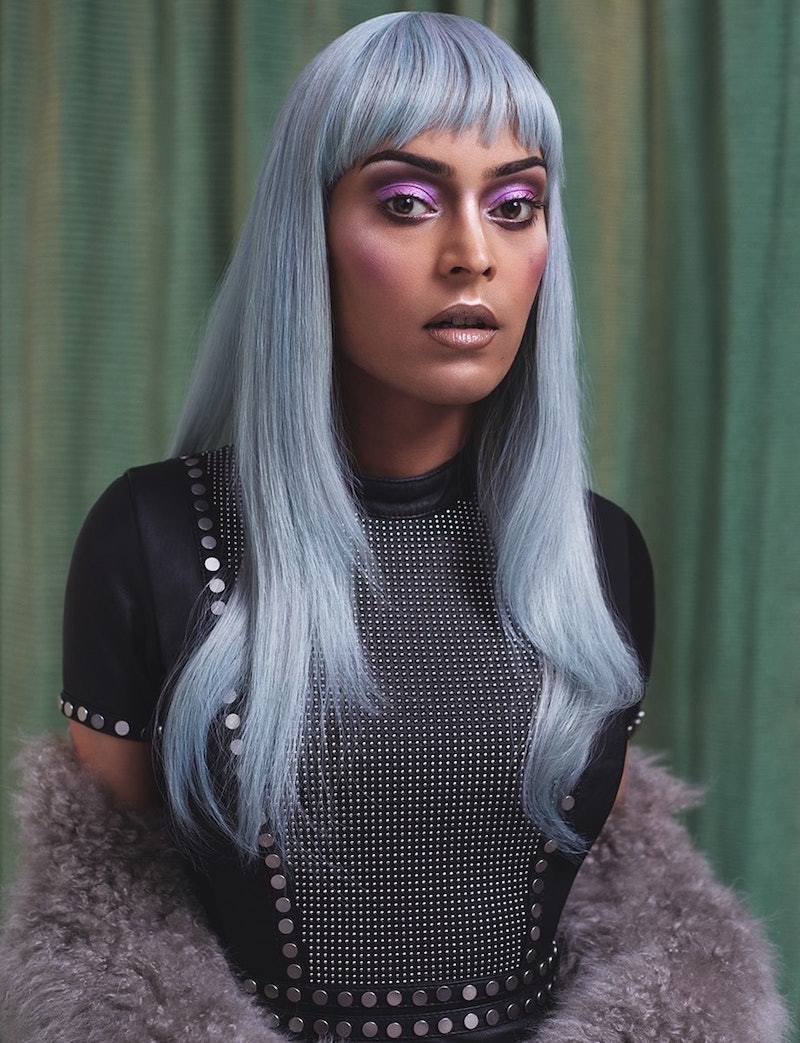 Ask Asifa Lahore to introduce herself, and she will tell you that she classes herself as “an intersectional and unique person.”

“I’m an LGBT+ activist, and I live my life as a trans woman,” she tells me via Zoom from her home in South East London. “I previously lived my life as a gay man, and then very publicly came out as transgender during my drag career, and I live with a disability, being severely visually impaired. I’m very proud of who I am and what I have achieved so far in the 38 years that I have been on this planet.”

It is her experience as a prominent member of the UK’s queer activist infrastructure – constantly challenging the misrepresentation of queer, Muslim, and south Asian communities across the country – and her ability to communicate that that makes her the perfect ambassador for Just Like Us’ School Diversity Week. The annual event promotes inclusivity in an education settings, seeking to make schools safer and more welcoming to pupils who are part of the LGBTQ+ community. “I’m really honoured to be taking part and to be able to talk about my experiences to young people,” Lahore tells me.

We meet (virtually) ahead of her masterclass on June 24 to discuss the importance of reaching out, the urgency of inclusivity, and the power of drag.

Erkan Affan: Thank you for taking the time Asifa, I want to start by asking you about this label you’ve been given as the “first out Muslim drag queen” in the UK. How does it make you feel, and what type of attention do you receive with it?

Asifa Lahore: From my own experiences in going out clubbing as a teenager and being in the scene for over 15 years, I know Britain has had a robust queer Muslim and queer south Asian scene since the 1980s. So I’m very much aware of my own history and the queens that come before me.

However, when I first came out publicly, many of these performers were not known in the mainstream, and kept themselves out of the spotlight for fear of the treatment they’d receive. And so being labelled as the first ‘out’ Muslim drag queen likely comes from my decision to put my head above the parapet, so to speak.

I remember, when I first began performing around 2011, I would get pigeon-holed. People wouldn’t understand my drag because they couldn’t relate to my jokes, or they found it controversial that there could be a Muslim drag queen working the circuits. But I never thought about stopping, and so I unapologetically – but also unwillingly – became an activist, raising my voice and fighting for my recognition as a Muslim drag queen. Now, looking at social media in 2021, I’m happy to see a plethora of brown, Muslim, and queer artistry and activism out there on a global level.

EA: Tell me a bit about how you got involved in School Diversity Week, and what impact you hope it will have?

AL: I went to school during the era of Section 28 in the late 1990s. I was subjected to a lot of bullying and, because of section 28, the teachers couldn’t step in for fear of “promoting homosexuality.” So I put up with the trauma of experiencing shame, anger, and loneliness until I was able to deal with it through therapy and healthy relationships in my 20s.

All this meant that, when I was approached about School Diversity Week came up, I jumped at the opportunity to tell my story. Through my identities as a Muslim, British, Pakistani, south Asian, queer, transgender, and disabled person, I try to make people understand that we all have different angles to our experiences and that these are OK. It does get better, and school is not a reflection of how your whole life will be.

EA: What do you think are the best ways for younger people to connect with others like themselves, and remove themselves from difficulties they experience at school?

AL: There’s a lot of services available now, especially with the internet. There’s Imaan, NAZ Project, Hidayah, there’s a Sikh LGBT charity called Sarbat, I know there are LGBT Jewish services and so much more out there. You are not alone, because someone has already been through what you’re going through and you do not have to do it by yourself. It just takes courage. The first step is the hardest. There are so many more relationships for you to have, families for you to make.

EA: You mentioned courage, and I want to know how your work has given you the courage you have today?

AL: Well, drag specifically has really empowered me in two very different ways. In my teen years, I was scared to follow a career in performing arts out of the fear of being outed. Drag was an opportunity for me to perform again, it became the ultimate expression. I was performing with the utmost glamour, femininity, and all the people that had put me down in my teenage years and rejected me for my queerness and/or brownness didn’t matter anymore. Secondly, when I started wearing makeup and trying on what is considered “female clothing”, something inside me clicked. Dresses felt like a hand fitting a glove. Drag led to my conciliation with my trans identity, allowing me to come out all over again. It gave me my life, and I would not change anything about it. For me, it is full-blown self-expression with no apologies.

More like this
These Are The 3 Most Mellow Zodiac Signs
By Kristine Fellizar
I Visited Remedy Place, The Social Club Transforming The Wellness Industry
By Rachel Lapidos
13 Weight Bench Exercises That'll Give You A Full-Body Workout
By Carolyn Steber
Here's How Long You Should Hold A Stretch
By Carolyn Steber
Get The Very Best Of Bustle/UK