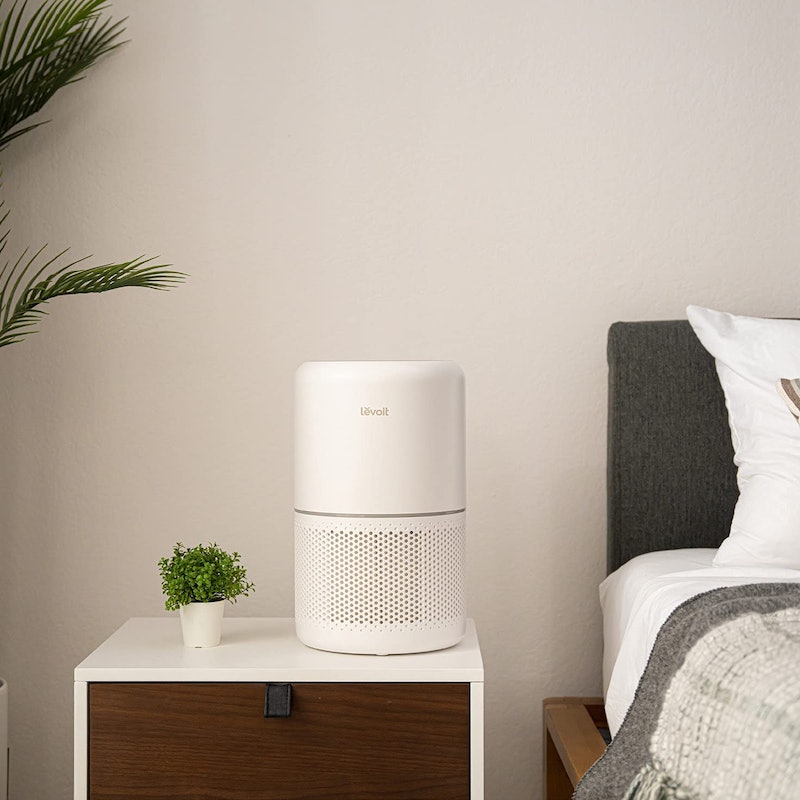 Dust mites can be a big trigger for people who deal with allergies and asthma, but fortunately, air purifiers can help minimize the presence of these microscopic pests. The best air purifiers for dust mites use True HEPA filters to trap particles as small as 0.3 micron, and they’ll be sized to fit your living room, bedroom, or any other space where you want to breathe easy. Plus, some are Wi-Fi-enabled for voice control, and others have built-in air quality indicators.

Dust mites feed on the dead human skin cells found in dust, but it’s not the mites themselves that cause irritation — it’s their pellets and body fragments, and these particles measure about 20 microns on average. To tackle them, look for a filtering-style air cleaner with a True High Efficiency Particulate Air (HEPA) filter, which can trap particles as small as 0.3 micron, which means it’ll also cover common allergens like pollen and pet dander. You may also come across “HEPA-like or HEPA-type” filters, but keep in mind there’s no industry standard for these marketing terms, and while they may in fact help reduce allergens, a “True HEPA” filter will be guaranteed to remove 99.97% of particles.

It’s also important to note that physical air purifiers (like those that use True HEPA filters) are preferable to electronic air purifiers that use UV light, ionizers, or hydroxyl generators. Not only are they ineffective at removing large particles like dust, but they emit ozone, which can actually create an inhalation hazard to anyone in the room. In other words, a physical air cleaner with a True HEPA filter is your best and safest choice when dealing with dust.

Keep in mind, that the square footage listed for each air purifier generally assumes 8-foot ceilings, so you’ll want to go for a larger size if you have higher ceilings. Likewise, the square footage power is calculated at the air purifier’s highest speed setting, so if you want to run yours on a lower (and quieter) speed, you might want to size up as well.

Ready to put coughing and sneezing behind you? These are the best air purifiers for dust mites — and they’re all on Amazon.

1. The Best, All Things Considered

Boasting an impressive 4.7-star rating after more than 39,000 reviews, this LEVOIT air purifier is a great choice for small to medium-sized rooms, exchanging air five times per hour in spaces up to 219 square feet, and two times per hour in spaces up to 547 square feet. Air first passes through a nylon pre-filter that catches large debris like pet hair and dust, before it reaches a True HEPA filter that captures up to 99.97% of airborne particles as small as 0.3 micron. Finally, a third carbon filter helps to neutralize odors, smoke, and pollutants. The purifier operates on three speeds (but there’s no turbo mode), has options for setting timers, and features a sleep mode that allows it to run at a low noise level while you rest. Plus, it’s a compact size and rings up at a budget-friendly price.

Helpful review: “I am allergic to dust mites and constantly wake up in the middle of the night sneezing or sneeze first thing in the morning. This helped substantially! I noticed symptoms were significantly reduced. It’s not too loud to keep on either, and offers a night mode which you can barely notice any sound.”

2. The Best For Larger Rooms

For larger rooms measuring up to 840 square feet, this large-room air purifier uses a True HEPA filter to trap 99.97% of airborne particles as small as 0.3 micron. The highly rated, three-stage purifier also uses a pre-filter to capture dander and hair, as well as an activated carbon filter to neutralize odors. The purifier’s control panel lets you toggle between three speeds as well as a turbo setting for quick cleaning, and you can also set the purifier on a timer. Like the above option, it has a sleep mode that ensures quiet operation that won’t disturb you while you rest. Because of its power, this pick is quite a bit bigger than the previous option, and is best suited to rooms with floor space.

Helpful review: “I am thoroughly enjoying not having to dust as often or sniffle all the time. Happy with this affordable purchase.”

This smart air purifier from LEVOIT has a similar design to the top pick (also from LEVOIT) but has the added convenience of Wi-Fi connectivity that allows it to be controlled via the connected app or your smart home assistant. This helpful feature allows you to voice control the purifier, or turn it on from your phone to ensure the air is fresh by the time you return. The True HEPA filter removes up to 99.97% of airborne particles as small as 0.3 micron, and the pre-filter captures larger particles while the activated carbon filter reduces odors. The machine operates on three speed settings (but there’s no turbo option), as well as a sleep mode for ultra-quiet operation, and you can set it on timers if you don’t want to hassle with remembering to turn it off. However, this pick is best for small rooms — it can cover spaces up to 376 feet, but you’ll see maximum benefits closer to 183 square feet.

Helpful review: “Realizing that my allergies were the worst in my bedroom where you have the most dust mites, I purchased this little unit to see if it would help. [...] I placed this unit on a bedside stand, keep it turned on high during the day, then on medium to reduce the noise when I go to bed. I set a routine for Alexa to do this for me. Now the dog and I both enjoy sound and restful sleep each and every night. This is definitely one of the best purchases I have ever made.”

4. The Best With An Air Quality Display

For a little more hands off control — and insight into your indoor air quality — this air purifier has a built-in air quality sensor, and when the machine runs in auto mode, it’ll adjust the fan speed in real-time for the most efficient cleaning. The purifier has a True HEPA filter that capture 99.97% of particles as small as 0.3 micron, as well as an activated carbon filter that eliminate odors — although there’s no specific mention of a pre-filter. It also has an anionic generator to eliminate more stubborn odors, but it’s California Air Resources Board-certified to produce an acceptably low output of ozone. That being said, the anionic generator is operated separately, so you can always leave it off, if you prefer.

The air purifier operates on multiple speeds (though the exact number of speeds is not specified), has timer options, and has a sleep mode for quiet operation. And while it does have the “smart” feature of self-adjusting based on the air quality sensor, keep in mind that it’s not Wi-Fi-enabled, so it won’t connect to your smart home assistant or phone. That being said, it does come with a remote, so you can adjust it from across the room.

Helpful review: “We have an incredibly dusty house. I could literally see dust on our bookshelves less than one week after dusting. After using this, I could go months without the same buildup in the room where it is located! The automatic smart feature is pretty sensitive. Its located two rooms away from our kitchen and starts running in high mode once you can smell food cooking. It also kicks into high gear whenever I use smelly cleaning products like Mrs. Meyers or Method.”

5. The Best For Travel

While it doesn’t pack the punch of a full-size machine, this mini USB-chargeable air purifier can help keep you comfortable when you’re on the go. It’s sized to fit in your car cupholder, but it’s helpful in any small space, and reviewers have reported it’s even powerful enough to use in hotel rooms (although you may want to place it on the nightstand next to your bed, since it won’t have a very far reach). The True HEPA filter captures 99.97% of particles as small as 0.3 micron, while the activated carbon pre-filter does double duty as an odor reducer and trap for hair and dander. The rechargeable purifier operates on three speeds and — on the lowest setting — operates for up to 12 hours before needing to recharge. There’s no sleep mode or other upgraded features, but it weighs just 1 pound and has a built-in handle for easy portability.