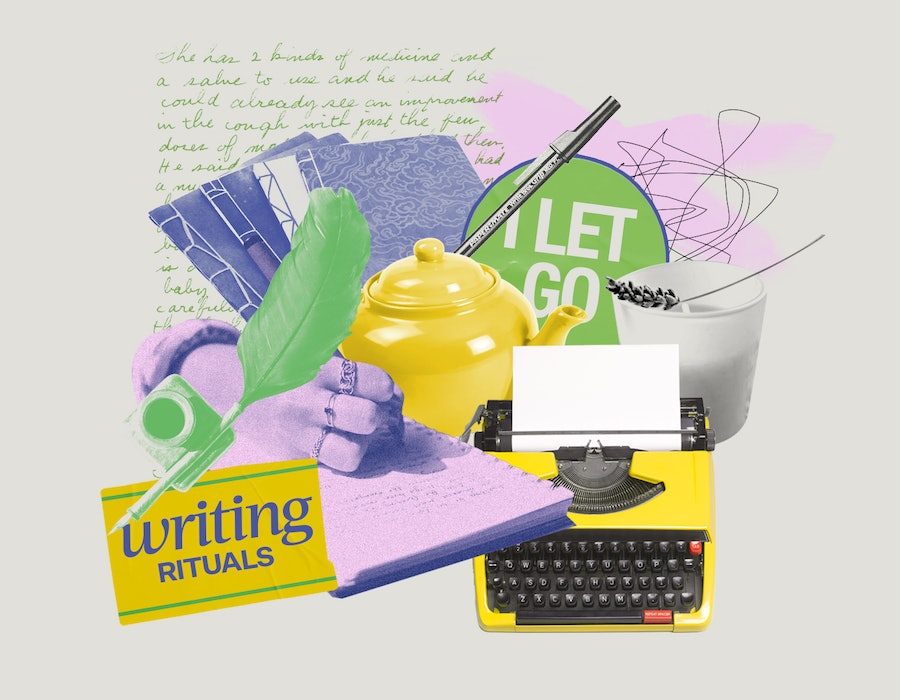 I’ve written three books, and yet writing has never come easily. I agonize over the chasm between what is in my mind and what comes through my fingers. It makes me nervous and doubtful and neurotic about everything — even my hair, which, as far as I can tell, has nothing to do with writing. When working on my first book, I didn’t visit a salon for eight months. The second one kept me away from scissors and dye for two-and-a-half years until my feral hair fell down my back and my dark roots crept past my ears.

My hair doesn’t confer Samson-esque powers of clarity and precision to my writing, so why do I do this? It may come from a bit of superstitious sportsmanship, like the baseball player’s refusal to change socks during a season. It may also be a reaction to the terror of the blank page. Or it’s a way to wrest control and punish myself a smidge.

Deeper into the freewheeling research phase, the landscape shifts and fear sets in. I set earlier and earlier alarms on my phone until I get to 4:30 a.m., which gives me the time I need to get my butt in the seat at my self-flagellating “magical writing hour”: 5:30 a.m. And since I’m not a morning person, I’ve had to test out a variety of torture devices to get myself out of bed: light emitting alarm clocks, vibrations, freezing cold showers, nap schedules inspired by Tim Ferriss’ 4-Hour Body. At one point I tried to sleep only in four-hour increments to get me to the magic multiple times a day. It didn’t go well.

I’ve even used psy-op techniques to torment myself to write. During my second book, I woke up every morning to Wings’ “Let ’Em In.” After months of this, I grew to hate the opening so intensely that I would fly out of bed before McCartney dropped in with, “Someone’s knocking at the door…” So that actually worked.

I tried to train my brain to reach what Cal Newport deems “deep work” mode (part of the ritual is reading lots of tech bro self-help books). Meditation. Breathwork. Prayer. Morning pages. Writing talismans (a cup of dried lavender, a lit candle, my favorite writing book The Modern Library Writer’s Workshop, certain jewelry that shifts with each project, a specific hair clip), mushroom powders, crystals, the list goes on. I started a matcha latte routine during my second book. The specific brewing temperatures, the sifting, whisking, steaming — all for one cup of mildly unpleasant green tea — seemed to be a perfect metaphor for the day ahead.

I haven’t even gotten to the writing part yet. I used Freedom to keep myself from losing time (and then learned how to turn it off, which required another app), Tabata timers to schedule writing blocks, various writing programs for different stages and then ultimately pasting it all into Word and messing with the formatting. I write multiple outlines before I started writing, drafts before I got a complete “first draft,” and dozens of edits before I share with anyone. I won’t bore you with the nitty-gritty. It’s all so self-indulgent.

And then, two years ago, I had twins. Any notion of maintaining a ritual — let alone contorting my life around writing — evaporated; my “ritual” revolves around survival now. When they were 2 months old, I got my edits back on my second book. I snuck away at 9 a.m. after their babysitter arrived, hauled ass to a study space that had the charm of a Staples, where my breast would leak and I would cry, and then returned home to turn back into a mother. No Tabata timers. No matcha lattes. My hair was a mess not because of some superstition and asceticism, but because I had no time. Somehow, I managed to complete the edits in an out-of-body state.

A year later, right at the start of the pandemic, when my kids were beginning to walk, I took on a ghostwriting gig. Now even the writing space was closed, leaving me without child care, only a bed, a lap desk, and crying kids on the other side of a closed door. I stole away any time that was open — during naps and Sesame Street marathons — and finished the book in three months.

The reality is that I feel lost without those rules and practices. I feel chaotic, undisciplined, vulnerable to the whims of the writing gods, who just might take any ability I have away. I realize how strange this all sounds. But I’m writing this as I’m embarking on a new book — right in the thick of the research stage — and already I have the strong urge to make an appointment with my hairdresser. I have a feeling I won’t be back again for a while.

More like this
9 Balance Training Exercises That'll Improve Your Mind-Body Connection
By Carolyn Steber
6 Unexpected Causes Of Post-Workout Fatigue
By Carolyn Steber
I Visited Remedy Place, The Social Club Transforming The Wellness Industry
By Rachel Lapidos
The 8 Best Pilates Exercises For Lower Back Pain
By Carolyn Steber
Get Even More From Bustle — Sign Up For The Newsletter