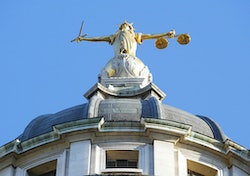 The head of the courts service in England and Wales has apologised for "totally unacceptable behaviour" after Alexandra Wilson, a Black barrister, spoke out about being mistaken for a defendant three times in one day. Wilson, who specialises in family and criminal law, tweeted about her frustrating experience on Sept 23. Her comments went viral, gaining more than 40,000 likes, triggering fresh accusations about racism in the courts.

In her tweets, Wilson detailed how she was repeatedly misidentified as a defendant. First by a security guard upon her arrival at court – which she shrugged off as an "innocent mistake" – then by a member of the public, who thought she was a journalist and instructed her to wait for the usher to sign her in. Once inside the court, a prosecutor mistook Wilson for a defendant, telling her to wait outside and wait for an usher.

"Before I could respond she then asked if I was represented," tweeted Wilson.

The 25-year-old barrister said the experience left her feeling "absolutely exhausted":“ This really isn’t ok... I don’t expect to have to constantly justify my existence at work.”

Wilson is the author of In Black and White, published by Octopus Publishing, which recounts her journey to becoming a barrister, charting all the challenges, frustrations, and triumphs.

In response to her tweets, Kevin Sadler, the acting chief executive of Her Majesty's Courts and Tribunals Service, said: “I‘m very sorry about your experience at court yesterday – it is totally unacceptable behaviour and I’m investigating the role of my staff and contractors as a matter of urgency."

Amanda Pinto QC, chair of the Bar Council, told the Guardian that Wilson's experience is not a "one-off." She said:

"With regret, I fear Alexandra’s experience is not a one-off. Many barristers have to put up with the prejudiced assumptions of others – Alexandra has done so with exemplary grace and patience. I am speaking directly with HMCTS, the senior judiciary and the CPS [Crown Prosecution Service] immediately, urging more to be done to stamp out this behaviour.

“The barristers’ profession is always striving to be more representative of the society it serves. There is more to do to change the perception of the bar, but that is no excuse for the kind of attitudes and remarks described. We are not all white, middle-class men.”

Last week a Ministry of Justice report found people from Black, Asian and minority ethnic backgrounds are “over-represented in applications for judicial appointment” but are “less likely to be successful”. Echoing Wilson's experience, the Society of Asian lawyers commented: “From our polls on Monday for our event one third of lawyers attending who appear in court have been mistaken for the defendant. Enough is enough.”

"Everyone should be treated with respect," WIlson told the BBC. "The fact I was shouted at to get out of court isn't OK for defendants either."