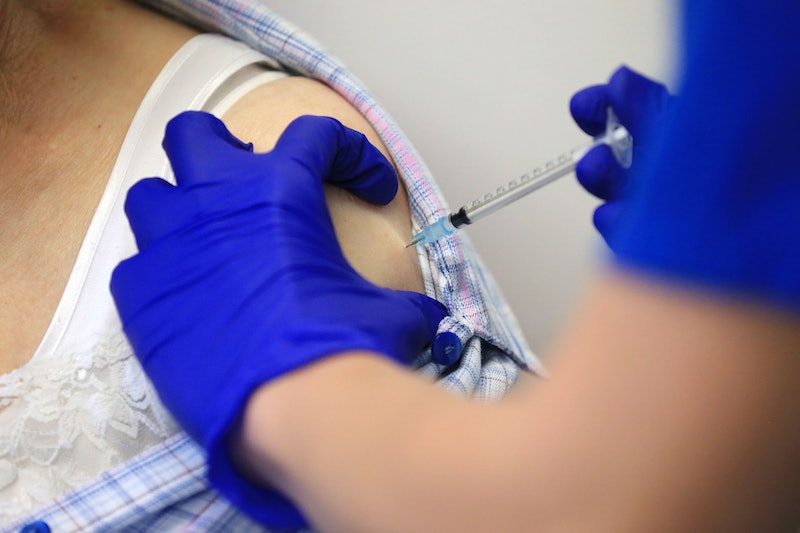 It's a vaccine bonanza: first Pfizer's COVID-19 vaccine was authorized by the Food & Drug Administration (FDA) in December, and now Moderna's vaccine has got the go-ahead too. Every day, Operation Warp Speed is vaccinating more people across the country. But the vaccine rollout will be tightly controlled for quite some time. Realistically, you're not going to be able to choose which COVID-19 vaccine you get, at least for several months.

Dr. Francis Collins, M.D. Ph.D., head of the National Institutes of Health, told a press briefing in December that choosing a vaccine isn't an option at the moment, because there aren't yet enough vaccine doses to allow people choices. "People who get offered one should feel quite happy about that," he said. At the moment, only healthcare workers will be offered the vaccine, and they'll get whichever vaccine their place of work stocks.

The majority of the population will hopefully be able to get a vaccine around or after spring 2021, according to director of the National Institute of Allergy and Infectious Diseases Dr. Anthony Fauci, MD, in an interview with MSNBC in mid-December. By that point, pharmaceutical companies will have produced millions of vaccine doses, and other vaccines may have been given FDA emergency use authorization; Dr. Fauci told ABC News in January that vaccinating 1 million people per day is a "realistic goal" in the next few months. The more vaccine doses there are, the more choice you may have — but it depends a lot on logistics, where you live, how your state is organizing vaccine distribution, and a lot of other factors.

Can You Choose Which Vaccine You Receive?

For the moment, experts say the answer is no, purely because there aren't enough vaccines to go around. The Washington Post reports that the supply of vaccines will be far short of demand in the first few months of the vaccine rollout. Your area will likely not have enough vaccines on hand to offer you a choice. Plus, the Pfizer and Moderna vaccines have different requirements — Pfizer needs deep-freezing, for instance, while Moderna doesn't — so your local vaccine provider may only be set up to handle one kind at a time, at least initially. The UK will allow mixing and matching different vaccines to make sure that everybody gets their full regimen if one vaccine type isn't available, but other countries, including the U.S., are sticking with one type of vaccine per person — so if you get your first dose from Pfizer, you'll get the second dose from them, too.

That might change, but it will take months. Dr. Kelly Moore M.D., from the vaccination education group Immunization Action Coalition, told the Post that she hopes vaccine supply may meet demand by the latter half of 2021, as Pfizer, Moderna and other potential vaccine makers produce and deliver doses to the U.S.

If you're in a group that responds better to one vaccine than another, your choices may also be affected. The New York Times also reports that as the U.S. finds out more about different vaccines — as in, if they happen to be less effective in some people, or more helpful for others — certain populations, like older adults, might be offered one vaccine over another. Pfizer's data, for instance, suggests it's 94% effective in people over 65, while Moderna's is only 86% effective in that population, according to The New York Times.

When Might You Will Be Able To Choose Your Vaccine?

The answer to this depends on when states finish vaccinating healthcare workers, the elderly and people in residential care, and move on to the remainder of the population. It also depends on how many vaccine doses will be available at that time. If you're a healthy young member of the population and don't count as an essential worker, you're likely at the bottom of the official vaccine priority list, according to the CDC. But the longer you have to wait, the more vaccines might be available.

In addition to Pfizer and Moderna, there are a host of other pharmaceutical companies completing Phase III trials on their vaccines and waiting to apply for FDA emergency use authorization, including AstraZeneca, Johnson & Johnson, and Merck. If they're authorized, produce millions of doses, and then see those doses distributed around the nation, then you might start to see a choice of vaccines on offer — but that process will likely take months.

And vaccine distribution can also get complicated; Pfizer said on Dec. 18 that it had millions of doses waiting to be distributed, but that Operation Warp Speed wasn't shipping them out because of logistical problems. (General Gustave Perna, the head of Operation Warp Speed, took personal responsibility for the error on Dec. 19., per The Washington Post.) The more problems there are in the vaccine pipeline, the longer it could take to get more choices.

Bottom line? By the spring or late summer, you might be able to choose a vaccine — but a lot of things have to fall into place between now and then.