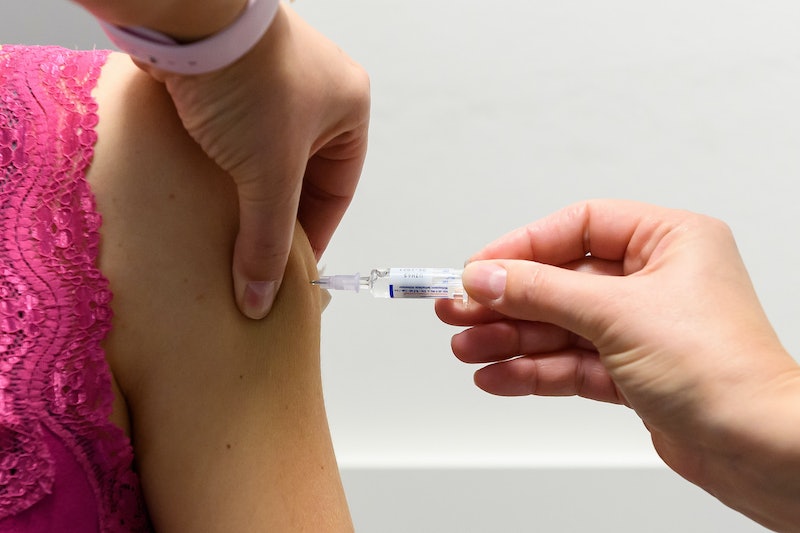 In a move heralding the start of the end of the pandemic, coronavirus vaccines began rolling out, first in England on Dec. 8 and now in the U.S., following the Food & Drug Administration (FDA)'s emergency use authorization of Pfizer's vaccine. It looks like the side effects of the Pfizer and Moderna COVID vaccines are going to be mostly mild and annoying — a headache, fatigue, a bit of pain at the site where you got injected, and maybe a fever, all passing in a day or so. But two cases in the UK, where the Pfizer vaccine is now being given to healthcare staff and people over 65, have raised a bit of concern: Two healthcare workers had what may have been allergic reactions to the jab shortly after it was administered, per the BBC. While they both recovered within a day, it's reasonable to wonder whether you should get the COVID-19 vaccine if you have serious allergies.

Both the workers had previously had severe allergies, and carried adrenaline pens with them. But Dr. Gabor Kelen M.D., professor and chair of the Department of Emergency Medicine of Johns Hopkins University, tells Bustle that scientists don't know much about their reactions to the vaccine. "Some news outlets used the word 'anaphylactoid' reaction, which is not a true allergy but looks the same," he says. Anaphylactoid reactions can resemble anaphylaxis, the allergic reaction that can cause airways to close, but are actually less severe. Right now, he says, there's not enough data to draw firm conclusions about what happened.

Allergies are the body's over-enthusiastic immune response to something it perceives as a threat, whether it's tree pollen or penicillin. People do experience allergic reactions to vaccines every so often, but it's rare. The Centers for Disease Control & Prevention (CDC) says that anaphylaxis happens at a rate of one per million doses of many vaccines. It remains to be seen whether that rate is higher when it comes to COVID-19 vaccines, and if so, why.

Many people will hear 'don’t get this vaccine if you have allergies', rather than the warning for severe allergies only. We don’t want to discourage people who are at risk of severe disease or bad outcomes from getting these vaccines.

"Patients with known history of severe adverse reactions associated with any vaccine or history of severe reaction to any component were not entered into the vaccine trial," Dr. Kelen says, adding that that's pretty normal. Per data released by the FDA, 0.6% of people who received the vaccine reported allergic reactions, compared to 0.5% of people who took the placebo. So it seems very unlikely that if you'll react to the jab if you've never had a severe allergy. But scientists don't know how safe the vaccine is for people who carry around EpiPens all the time.

Experts are clear that the data shows people with mild allergies will most likely be completely fine. "Many people will hear 'don’t get this vaccine if you have allergies', rather than the warning for severe allergies only," Dr. John Sellick D.O., professor at the Department of Medicine at the University of Buffalo and an infectious disease expert, tells Bustle. "We don’t want to discourage people who are at risk of severe disease or bad outcomes from getting these vaccines."

For the time being, if you have a history of serious allergies — those strong enough to require an adrenaline pen — experts suggest waiting. "Until these events are unwound, it is safest to avoid or delay COVID-19 vaccination with Moderna or Pfizer for people with significant reactions," Dr. Kelen says. Though Moderna has not yet been authorized for emergency use, Moderna and Pfizer are producing the same type of vaccine, using mRNA to train the body's immune system — hence the parallel advice. In their emergency use authorization, the FDA says you shouldn't get the Pfizer vaccine if you have a severe allergic reaction to your first dose, or know you're allergic to any ingredient of the vaccine, while the Centers for Disease Control and Prevention (CDC) said on Dec. 13 that people with severe allergies can get the vaccine, but should talk about it with their doctor first, per STAT News.

The UK's Medicines and Healthcare products Regulatory Agency advised on Dec. 9 that anybody with a history of anaphylaxis to a vaccine, medicine, or food should not receive the Pfizer vaccine, and that nobody who gets anaphylaxis after their first shot should receive the second one. According to the Washington Post, Operation Warp Speed's science advisor, Moncef Slaoui, told reporters on Dec. 10, “Subjects with known severe allergic reactions should not take the vaccine until we understand exactly what happened here."

Still, for the vast majority of the population, it'll be a while until the vaccine is available to you at all. At that point, Dr. Sellick recommends discussing your risk with your primary care provider. "The reactions are usually to a particular component, so other future vaccines may be safe to give," he says. The Pfizer vaccine might be updated, or an allergy-safe version might be produced. And he stresses people who do have a reaction will be taken care of. "The standard of care is to monitor people for a short period of time after a vaccine is given so treatment can be given if a reaction occurs."