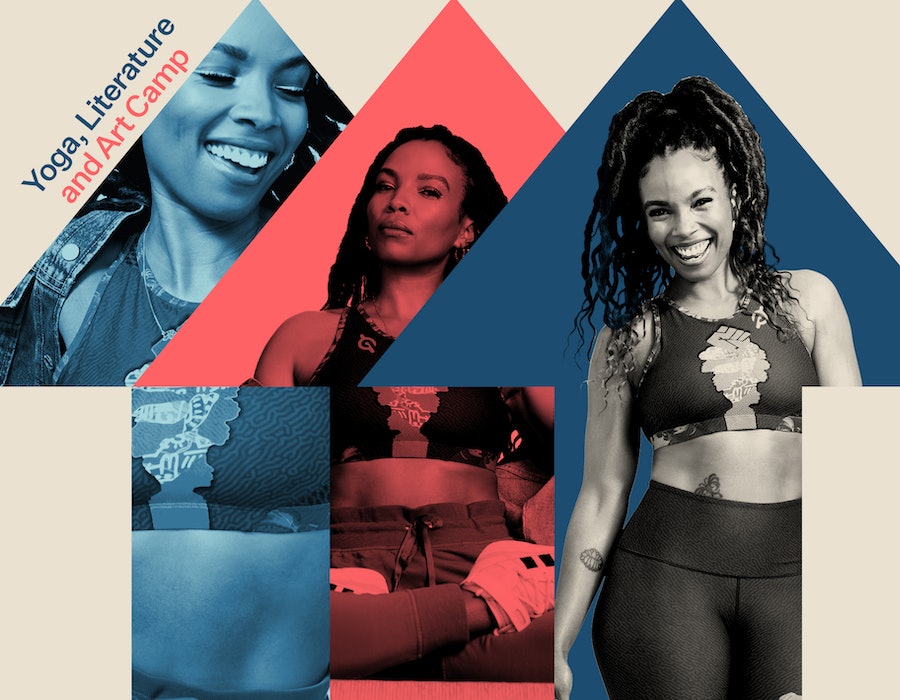 Peloton
The Level Up

In "The Level Up," changemakers in the fitness and wellness industries tell us how they're making an impact in their communities, from pushing for inclusivity to promoting body acceptance and so much more. Here, Chelsea Jackson Roberts discusses how she's working to make the healing powers of yoga more accessible for people of all backgrounds.

Chelsea Jackson Roberts has been practicing yoga for almost 20 years, and credits the time on her mat for helping her through hardships and obstacles. "I did [yoga] initially because I wanted to find a way to work out," she tells Bustle. "It wasn't until later around a really transformative moment where I lost one of my best friends tragically when I was in college. This workout ended up supporting me in healing from that loss." This was a turning point in her connection to yoga.

She's hardly the first to turn to yoga for its healing powers, considering the long list of physical, mental, and emotional benefits the practice has to offer. But Jackson Roberts is so passionate about these benefits that she's centered her career around making yoga more mainstream and accessible — and it all began when she was an elementary school teacher in Atlanta.

She used yoga to integrate practices like breathing and movement in her third grade class. "I taught at a Title 1 school, so the majority of the students lived below the poverty line and many were living in shelters or in and out of child protective services. So it was often hard to show up to all of those challenges that were in the classroom." She used yoga to center their personal experiences, and realized the students were kinder to each other and more excited to come to school.

Cue Jackson Roberts' epiphany: "I realized there was something there, and that's what made me leave the classroom to pursue a 5-year PhD program," she tells Bustle. Fast forward to today, and she's become the first Black yoga instructor on digital fitness platform Peloton and the founder of Yoga, Literature, and Art Camp, which brings yoga and the arts to teen girls of color — but is looking to do more.

Here, Jackson Roberts explains how her camp is influencing young girls' lives and how she's pushing to bring yoga to everyone.

Can you talk about how you came up with the idea of the Yoga, Literature, and Art Camp?

The dissertation for the last two years of my doctoral program was actually the foundation for the camp. I thought I was simply going in there to do this case study, get data, and feel great about this opportunity to work with these girls. Then after I was finished with it, the students who were part of my case study asked, "So when is our next camp?" The following year, my fiancé and now husband and I ended up founding our non-profit Red Clay Yoga [the non-profit behind the camp] which is still alive and well today.

In the physical space, we are practicing yoga, we are writing our own stories. It was important to me to integrate the literacy component. As a Black woman who was a little Black girl, I know what it's like to have assigned reading that was not necessarily reflective of how I looked, I wanted to center the experience for the girls. So they read literature by folks like Maya Angelou, Toni Morrison, and contemporary artists of our time who are primarily women of color.

What challenges have you faced as a woman of color in the yoga world?

Challenges exist for me to this day, and to be at Peloton right now, on a platform that has such an expansive reach, is important for rewriting the narrative of who yoga is for. In the past, I've had experiences where I have shown up at a [yoga] festival or conference as the teacher and I was mistaken as the person to clean the room, or the assistant.

It was important to shift that narrative for young women to walk into spaces and see me, to remind them that they too are worthy to be in these spaces as wise and knowledgeable teachers.

That comes from the systemic ways of marginalizing who counts as the wise and knowledgable teacher. It was important to shift that narrative for young women to walk into spaces and see me or to see me on the cover of a magazine, to remind them that they too are worthy to be in these spaces as wise and knowledgeable teachers.

Can you talk about the country's current state of diversity and inclusion in the yoga space?

We have to be honest about the context and the origins of yoga even coming to the West. Even then, it was about access. There is a very influential teacher by the name of Paramhansa Yogananda, whose book The Autobiography of a Yogi is a staple for any yoga teacher's training. And for him to come to the U.S. and to see and acknowledge the disparity in access to this practice is telling to me. During the time that he came to share yoga, there was segregation. That wasn't that long ago.

Yoga is no different than society as a whole. It's a microcosm for what we see, and when we don't see ourselves represented in these spaces, it's not going to just magically happen. Access plays a huge part, representation plays a huge part, access to education and teacher trainings plays a huge part. And then [with] yoga studios and yoga platforms, you have to look and see who's being invited to be in these spaces and who is missing. That's going to give us a lot of information on what can be done to start and expand who yoga is for.

What do you hope to change in the fitness world at large?