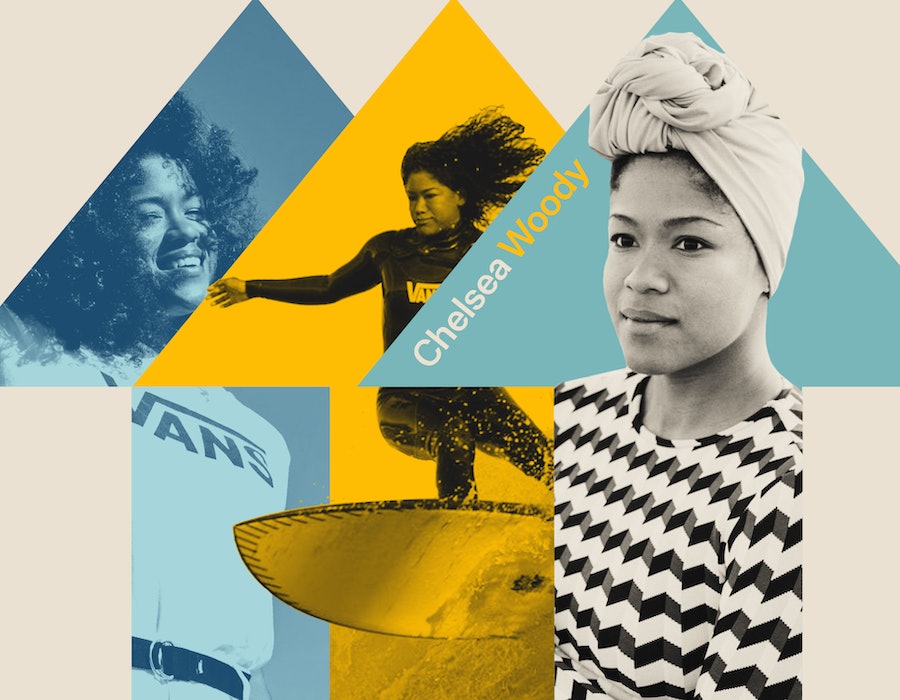 In “The Level Up,” changemakers in the fitness and wellness industries tell us how they’re making an impact in their communities, from pushing for inclusivity to promoting body acceptance and so much more. Here, surfer Chelsea Woody discusses how her sport can become more inclusive.

Chelsea Woody was just a child when she was introduced to surfing. “Like a lot of girls, I first saw surfing when I watched Blue Crush,” the 37-year-old tells Bustle. While she was intrigued by the sport portrayed in the 2002 movie, it would be many years before she would ride a wave herself. “I never got into it because I just didn't think it was something that was for me or that it was accessible.”

Historically, surfing has been one of the more exclusionary sports. Not only has it been dominated by men, but segregation laws up until the 1930s prohibited African Americans from even stepping onto the same beaches as those who were white, which accounts for the lack of historical representation of Black surfers. Out of 261 athletes in the World Surf League, only a handful are women of color, according to Columbia News Service.

However, seven years ago, Woody and her husband quit their jobs (she was a neuroscience nurse), sold all of their belongings, packed a few bags, and traveled the world. It was when they stopped in Indonesia, home to some of the most perfect waves in the world, that she finally learned how to surf. “We didn't take lessons. We would just go every day and watch everybody in the lineup and learn from them,” says Woody. “The people in Indonesia are so nice that they ended up giving us lessons anyways.”

She was instantly hooked. Within a few years of riding her first wave, she — along with Danielle Black Lyons and Martina Duran, two other women she found on social media when looking for more surfers like herself — would go on in 2019 to found Textured Waves, an organization dedicated to promoting representation in the sport and getting Black women like themselves in the water through events and storytelling. In 2021, she became a Vans Global Surf Athlete. Then, earlier this year, Woody introduced a Vans + Textured Waves collection, which features shoes, tops, and pants, all meant to symbolize the ocean as a place that belongs to everyone — regardless of skin color.

Here, Woody tells Bustle about how she’s working to make the world of surfing a more inclusive space.

When you first started surfing, what was your experience with representation?

What is your mission at Textured Waves?

[Lyons, Duran, and I] didn’t see other Black women or women of color represented in surfing, so we decided to create ourselves. We’ve made a few films, and we use photography and videography to feature women we’ve found from around the globe on our site. We’re letting people know that just because you don’t see people like you in the mainstream media doesn't mean it doesn't exist.

Women in surfing are not well documented because nobody has really taken the time to try to preserve that history, so that's one of our goals — and to hopefully pave the way for the next generation and women of color so they know that they belong in this space.

How is the Textured Waves collaboration with Vans helping you to achieve your goals?

I don't think that there has been such a collaboration that's been done in the surf world to this extent. We've had so many women of color messaging us as they're just excited to have more representation with bigger brands.

“We’re letting people know that just because you don’t see people like you in the mainstream media doesn't mean it doesn't exist.”

We wanted to incorporate our DNA into the designs. The double-helix is supposed to play off the DNA concept of our curly hair just interweaving. For some of the promotional materials, we got to include one of the elders in the African American female surfing community (besides Andrea Kabwasa and Sharon Schaffer), Mary Mills, who is also this really bad*ss skateboarder. It was really important for us to show that there were people before us and there was probably somebody before her, but unfortunately, that hasn't been documented. We’re here to try to preserve that and pave a new way for the next generation. The collection is not just clothing: It's something to hold on to, it’s art, it’s creating surf culture to pass on to the next generation so they can look back and say, “Hey, there were some ladies doing this in the 2020s. Awesome.”

Do you have advice for young Black girls who want to get into surfing?

The Textured Waves website has a link on the resource page that shows most of the organizations that are helping first-time surfers get into the water. If you live on the coast or live close to a coastline, visit a local surf shop and introduce yourself and ask how you can get involved. If you're lost, you can always reach out to us and we can help you connect with some resources in your area. We always get questions about that and try to link people up with folks that are actually on the ground, helping folks with surf lessons, and providing access.

What do you hope to see in the surfing world 10 years from now?

I hope in 10 years there will be an African American woman that is on the QS (Qualifying Series) or competing in the WSL (World Surf League) consistently with a full-time sponsor, traveling around the globe, and surfing in the Olympics. And I hope to see not just one but a whole horde of Black women in this space — in the United States and then globally. I think we're close.

I also hope that folks don't think that the competitive realm is the only option: You can be just a regular leisurely surfer. So I hope in my lineups, I see a lot more Black women in Northern California. And when I travel abroad, I hope I randomly run into Black women surfing because it's pretty rare for that to happen right now.

I also hope there are more Black women surfers represented in the media. I think that's the key, seeing it on a bigger screen that inspires girls that are in the Midwest or in the South that don't really have access to the coast. That's what it did for me. Seeing Blue Crush in the theaters, I thought, “Wow, that would be really cool if I could do that someday.”