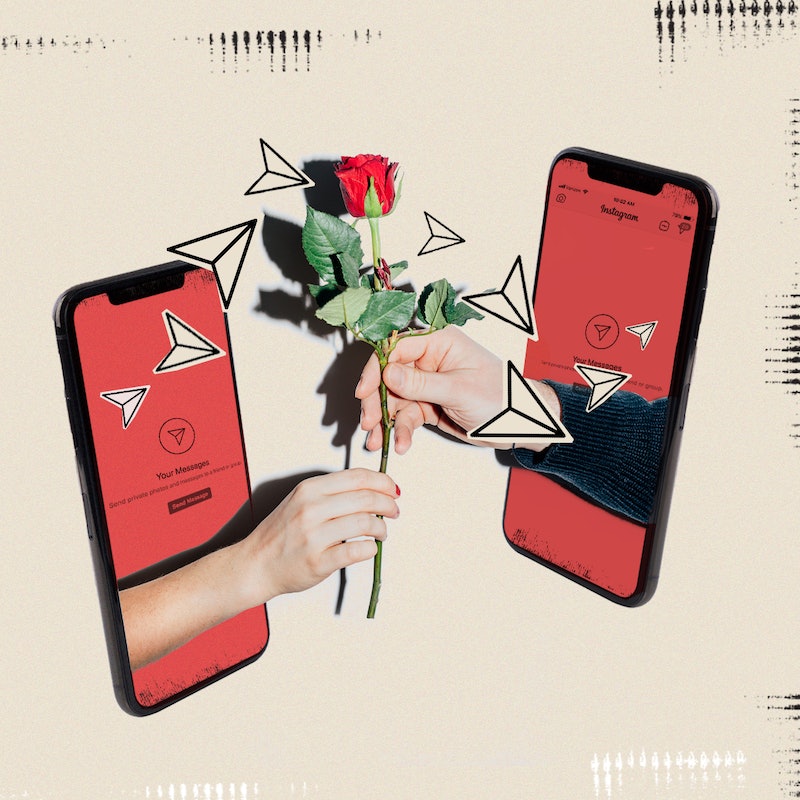 Some people use Instagram to rack up the likes. Others used it to find true love. For these couples that met on Instagram, "The One" was just a follow away. Oct. 6 marks the 10-year anniversary of Instagram, a decade of hashtags, explore pages, and the Lo-Fi filter. To celebrate Instagram hitting double digits, here are five love stories that began on the Instagram, as told to Griffin Wynne.

We don't know how we started following each other — we probably found each other through mutual queer connections — but I followed RJ for longer than he followed me. He started responding to my stories around March but didn't message me until two months ago when I shaved and bleached my head. He DM'd me saying I looked cute. I was immediately interested, and we started going on virtual dates. In September, we finally decided to meet in person. We both drove 12 hours to meet in the middle in Tennessee and stayed for five days. We were immediately smitten, like we knew each other for a long time.

I post pictures on Instagram that I would never let potential dates see, but RJ got to see all of the embarrassing things I post — like how much I love my rescue dogs. Somehow, he still wanted to drive across the country to meet me.

Meeting RJ was really out of character for me. I'm usually very picky on dating apps, and never had any luck. But on Instagram, we bonded over things that I normally don't talk about on dating apps or first dates.

We're trying to figure out the logistics of seeing each other in person during a pandemic. But we're both adventurous, so at the least, it'll be a good story.

Andrew found me through the hashtag #Halogaming. A few months before Halo4 SP was released, I posted a picture of my Xbox avatar with a Halo-related outfit, using the hashtag. It was 2012, I had 50 followers, and most of them were friends. When he started liking my photos, it caught my attention. I checked out his profile and saw that he was handsome (and British), then liked some of his posts.

DMs didn't exist back then, so we just started commenting on one another’s photos. He listed his Kik messenger number, where we texted and shared pictures of ourselves. We moved over to iMessage and FaceTime within a few weeks, then chatted and FaceTimed daily for four months. In March 2013, we met up in D.C., then rented a car and drove to Philadelphia and New York City. While in New York, we decided to move there together.

Meeting someone from Instagram in 2012 versus 2020 is probably very different. Today, Instagram is a bit more artistic and curated. In 2012, my Instagram aesthetic consisted of me posting pictures of video games. That said, it’s a place to connect with people from around the world. You presumably find each other through a shared link, like a hashtag. You can even see what their friends write about them in comments. We've been married for seven years and have a six-month-old baby.

Luna started following my finsta in the summer of 2017, because we had a handful of mutual friends. I removed them because I didn't want anybody I didn't know to follow me. But they kept following my public Instagram and would regularly interact by liking my posts.

A couple of months later, I was hanging out with a friend who recommended I follow Luna. I did and immediately resonated with their mix of mindfulness and revolutionary quotes. I added them on Facebook because I wanted to introduce myself. Over the next few months, we hung out a handful of times and continued to message each other on Instagram, replying to each other's stories. I eventually communicated my feelings for them in a Facebook message.

We got to know each other both through a handful of in-person meetups, online interactions, and the trust of having mutual friends. There was no expectation of romantic or sexual interactions, making it feel like an organic connection. We become romantically involved in January 2018, six months after following each other online.

It’s always so fun to revisit our story. Ten years ago, when Instagram was brand new, I found Jared while browsing through a mutual friend’s account and looking at who she followed. I followed him, and after liking a few of his photos, he followed me back. We exchanged many more likes, and I wondered how many more it would take before we were really "liking" each other. One night, he commented on my photo that he had an "insta-crush" on me. He now claims that he decided it was too cheesy after posting, but couldn’t figure out how to delete it. It worked! I was cheesy right back. I commented, "insta-blushing."

Since Instagram didn’t have direct messaging back then, we had to exchange numbers though Facebook. He messaged me, asking, "What would you say if I were to ask you on a date?" I replied with, "I’d say heck yes!"

We talked on the phone before going out, and it felt natural and comfortable. On Instagram, you can get a good feel for a person and parse whether you'd be a good fit. Seeing glimpses of their life makes it easier for the conversation to flow effortlessly. You can get to know their hobbies, interests, and what drives them, while also seeing parts of their past.

We have been happily married for over eight years and have three amazing kids. We feel so lucky to have found each other the way we did.

We met in 2011, back when Instagram was very much removed from everyday life. It wasn't an extension of Facebook, I wasn't following old high school friends, and my mom didn't have a clue what it was. I would often look at who my followers were following. That's how I found Matt. I liked or commented on a few of his photos, and he followed back. I was in a relationship at the time, so there were no ulterior motives. Instagram was all about finding little windows into other parts of the world. Matt was living in Oakland at the time. I was in Toronto.

My relationship came to an end in 2012. Matt commented on one of my photos, asking me to email him. I fired off a quick email, and the conversation flowed. I didn't even know what he looked like. We were sending these novel-length emails back and forth, just talking about life. It felt totally natural when he sent me his phone number.

We quickly progressed to Skype video chat and would stay up all night, watching movies and getting to know each other. Our longest Skype was a solid 12 hours. We'd text all day, every day. Three months later, he came to visit me in Toronto. I was petrified that I was about to destroy the easiest friendship I'd ever made, but our online chemistry translated in real life.

By the time Matt came to meet me, I had a fairly large following on Instagram. People were invested in our developing relationship. So, when dating long-distance got hard, they were there to cheer us on. A year later, we got married in a small ceremony — we had only one guest to act as a witness, but it felt like we had thousands. The love we felt that day continues to fuel us.

Meeting on Instagram is like meeting in a book store: You're authentically exploring and expanding your interests, while bumping into other like-minded folks in the aisles and striking up conversation. I like how organic that is. Getting to know someone through their words and photos is like meeting their heart first. I don't know how many people are still using Instagram the way we were back then, but they're lucky if they are.

Interviews have been edited for length and clarity.

More like this
Hinge Added A Video Prompt Feature, So Get Your Camera Rolling
By Hannah Orenstein
Are Quality Time & Gift-Receiving Love Languages Compatible?
By Lexi Inks
The Differences Between Polyamory & Open Relationships
By Lexi Inks
How To Set Rules If You're In An Open Relationship
By Lexi Inks
Get Even More From Bustle — Sign Up For The Newsletter